Limousin is deservedly celebrated by those who know it for its marvellous landscape, its castles and lakes, wonderful traditional cuisine and its abundant wildlife. You might even have heard of Limousin beef cattle and Limoges' fine porcelain, but Limousin’s link to the arts is much less well advertised.

I have lived in the south west corner of Limousin, in the Haute-Vienne, for seven years and was aware of the fact that Corot had a connection to Saint Junien, mostly due to the Cafés named after him, and a wholly unsuitable monument (in my opinion) place on a roundabout in the town centre, but, despite having studied modern art at university and art college, I didn’t know that the Barbizon painters and Claude Monet had worked in the Creuse!

This could be partly, or mostly, due to the fact that I have been building and setting up our Chambres d’hotes and gîte, Les Trois Chênes, over this time, (not to mention struggling to learn French), but I think also it is because this region is really the last area of France to be ‘discovered’, deservingly labelled ‘Hidden France’.

Please note all content, and images unless otherwise attributed, are the property of Barbara Walton and should not be reproduced without written permission.

The Limousin is situated just south west of the middle of France, between the Loire Valley and the Dordogne. To the east the Limousin is bordered by the Aurvergne. The region is comprised of three departements, Haute-Vienne, The Creuse and Correze.

Limoges is the capital of Limousin, and Saint Junien the second town, both located in Haute-Vienne and the river Vienne runs through both towns.

The Limousin is chiefly famous for two things, Limoges porcelain and Limousin cattle. The former is beautiful, translucent and strong porcelain manufactured in and around Limoges. The latter are the world-famous beef cattle reared in the green, flower-strewn meadows of Limousin. 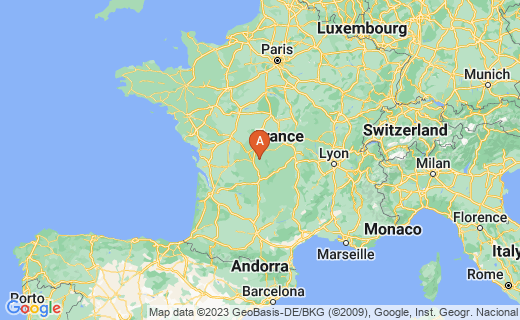 Art in Limousin goes back a long way

Of course there would have been art in Limousin for as long as there have been settlers. There are beautiful buildings, stained glass, enamels, sculpture, porcelain and religious paintings from the start, but in this short article I am goint to outline a few of the connections with some of the greatest artists of the last couple of centuries, the painters of Modern Art. This is just a starting point, some leads to the discovery of the full extent of the visual arts in the Limousin region.

The Tapestries of Aubusson

In the 15th century Aubusson and Felletin in the Creuse, artforms in their own right, became the centre of the world for tapestry. They made use of the work of some of the best know painters in the history of art for inspiration. Watteau, Picasso, Le Corbusier, Dom Robert, Picard le Doux, Riberzani, have all had their work transformed into tapestries. If you visit these towns now, you can see how the tapestries are made and see works in the galleries there. The town of Aubusson itself is well worth a visit.

John Constable and the School of Crozant

However, it is with the landscape painters of the mid 19th Century that our story really starts. English landscape painter, John Constable, exhibited several paintings in 1824 at the Paris Salon and these came as a revelation to the young French artists. At the beginning of the 19th century, the neoclassical tradition was in vogue; historical and mythological paintings based on the forms of classical Greece. Painters were trained in the studio by copying other artists and drawing from plaster casts of Greek sculptures before being allowed to draw and paint from live models. Constable, however, chose the less fashionable and lower status form of art, landscape painting, and instead of following set formulas, he went out into the countryside and painted from life. His cloud studies are famed for their fresh, loose style. He looked at the colours of nature afresh as well, shocking the establishment with his use of bright greens. This new emphasis on first hand experience of landscape led the young French artists to look towards nature for inspiration.

The School of Barbizon

The Barbizon painters, along with Constable and Turner are some of the best known precursors to the Impressionists. They worked in the forests of Fonainbleu, just south of Paris, but what better place to see nature at her most raw and sublime than in the Creuse? In 1830 some of the Barbizon painters, together with other landscape artists, gathered together around the village of Crozant. By the turn of the 19th century more than five hundred Impresionists worked in this area and the School of Crozant, as it was called, was born. It continued to be active until 1926. Painting were inspired by the towers and castles including the ruines of the Fortress of Crozant which dominated a rugged and magnificent valley at the confluence of the rivers Creuse and the Sédelle.

Monet (1840-1926), one of the leading and best known of the French School of Impressionist painting, stayed for three months in the village of Fresselines at the height of his career and, inspired by the powerful land formation and light in the Creuse,painted his very first series of 23 paintings there in 1889. One of the residents, just recently passed away, remembers her grandfather talking about Monet whome he had met. I found it stunning to realise that Monet worked there and was still, just two generations away from living memory.

Limoges porcelain and Monet also have close links. In 1898 Claude Monet designed a porcelain dinner service for his own house at Giverny, just outside Paris. Monet took a white plate and painted it by hand with a blue edge and a yellow rim. This has evolved into the classic Monet dinnerware popular throughout the world.

Originally this design was made by the companies of Godin and Arhendfeld but these are no longer in existence and the Monet dinner service is now part of the Haviland Parlon portfolio and is exclusive to the company. This association of Monet and Haviland Parlon came about when in 1978, Mr Van der Kempf, curator of the Foundation Claude Monet, asked Robert Haviland & C. Parlon, to recreate the original dinner set from some pieces of that had been found in the attic of Monet's house in Giverny. The dinner service that was produced stayed true to the original shape, pattern, and colors.

Monet painted in the Creuse at this point

Limousin is a hidden gem in France

Did you know that Monet painted in Limousin

It was in the softer, greener landscape of the lower lying Haute-Vienne that Jean-Baptiste Camille Corot (1796-1875) chose to work. As a child I used to admire his soft, slightly mournful silvery landscapes populated with little figures. His was a more classical landscape yet again, his approach to painting cleared a path for the better know leaders of outdoor (or Plein air) painting. He worked on the verdant banks of the river Glane just outside Saint Junien, inspired by pretty trees and picturesque rocks. The area is well signed, and you can go and enjoy this unchanged and unspoilt beautyspot yourself and see more or less the same landscape as Corot saw all those years ago.

After Monet, perhaps the second most famous and well loved Impressionist painter was Auguste Renoir. He was born in the city of Limoges in 1841 and there are several of his works exhibited in the Museum de l’Evéché, next to Limoges cathedral. As a child he worked in a porcelain factory in Paris, painting designs on china

The Centre for Contemporary Art at Rochechouart

The 13th century Chateau of Rochechouart in the Haute-Vienne, is now a centre of contemporary art and has several excellent exhibitions a year, as well as a permanent exhibition of the work by the Dada artist Raoul Hausmann. He was born 12 July 1886 in Vienna and moved to Limoges in 1944 seeking refuge from the Nazi regime. He remained in Limoges until he died 1st February 1971. See this article for more Information and works from Rochechouart Centre for Contemporary Art.

Each year during the summer the owners of the Chateau of Saint-Auvent, not far from Rochechouart, organises an interesting exhibition, often drawing on the work of young artists from abroad.

On lake Vassivière Island there is an impressive Centre for Contemporary Art, and the island itself is a showpiece of modern sculptures based on the theme of integrating nature into the landscape.

Other interesting exhibition spaces can be found in Limoges, Saint Mathieu, Eymoutiers and Meymac in the Correze.

It is this commitment to showing the best of modern art, to guarding its rich artistic history, the romance of its ancient monuments, the quality of light and the wildness of the landscape that make the Limousin an ideal destination for artists and art lovers today. Many artists and craftspeople have been drawn to this area for both the beauty and the tranquility of the Limousin and have set up studios and ateliers here, so those looking for art and painting holidays will be sure to find a course ideally suited to their needs and they will be able to experience this unique landscape much as Corot and Monet did over a century ago.

Many artists have been inspired by Limousin. Steve Lincoln Hubber has produced wonderfully textured paintings having been inspired by the massacre of the entire population of the Limousin village of Oradour-sur-Vayres on 10 June 1944. The statue at St Junien, The Muse of Corot by Yvonne Clergerie and the massive dragonfly, also in St Junien draw inspiration from the area.

Helpful hints for artists: Make your own stretcher

Photographs and Images Provided by:

The Impressionists: Their Lives And Works In 350 Images
Buy Now