The Navajo tribes are located in western New Mexico and northern Arizona. They are the Native Americans that began silversmithing and turquoise jewelry making in the southwestern U.S. From there, they traded with and instructed the Zuni, Hopi and Pueblo tribes in making this beautiful jewelry.

Today, all throughout New Mexico you will find these tribes of Native Americans presently making silver and turquoise jewelry because there is still quite a demand and market for it.

The turquoise they use is mined right here in the southwest and you will find turquoise mines in New Mexico, Arizona, Nevada, Utah, Colorado and southern California. So this is truly a regional art of jewelry making that has become a world-wide jewelry admired and worn by people all over the world.

Today, the contemporary jewelry the Navajos are making are beautifully colored inlay designs as the cuff bracelet pictured to the top right. The Navajos keep taking turquoise jewelry making to new heights as well as continuing to make their classic designs also.

How it all began

The Navajos have the largest southwestern Native American reservation and our nation's largest tribe with more than 160,000 inhabitants. They call themselves the Dine' which means "the people." Their reservation is located in northern Arizona, western New Mexico and southwest Utah.

The Navajo's ancestors were hunters and gatherers from the north who migrated into the southwest of the U.S. around five hundred to eight hundred years ago.

Atsidi Sani ("old smith"), a Navajo blacksmith was the first to begin making silver jewelry. He admired the Spanish and Mexican silver buttons and bridle bits their horses were adorned with when they conquered this area of the country.

The Navajos traded with other Native tribes and Atsidi Sani began to see beautiful silver jewelry he and other Navajos traded for and he wanted to learn how to make the jewelry himself. Around 1850, Sani traveled south to Mexico in hopes of learning the art of jewelry making. It is believed he first learned the art from a Mexican silversmith by the name of Cassillio.

The first jewelry Sani made was of just plain silver with no stones. He learned many different ways of forming and stamping his jewelry. This Navajo silver jewelry was the original Native American jewelry from the American western frontier.

The earliest Navajo jewelry was made using American or Mexican silver coins which they melted into ingots. Then, they hammered them into sheets of silver and cut out their designs and welded the silver pieces together. Silver solder laminated their silver jewelry designs together. Navajo silver jewelry now became a status symbol among the Navajos and was the mark of wealth and prestige.

Adding turquoise to the silver work was not common until sometime between 1880 and 1900, but again, the Navajos were the first to add it to their silver jewelry. It is believed Atsis Chon (active 1870's - 1900) was the first Navajo to set turquoise into a silver piece.

The Navajos had previously traded for turquoise and turquoise beads from the Santo Domingo Pueblo people (known as the Kewa) of the Rio Grande area in New Mexico a bit south of Santa Fe.The addition of turquoise into the silver jewelry caused it be in high demand. More trading posts sprung up in the southwest and Navajo jewelry was big trade for the Native American traders who traded for it first.

The Native American traders then took it out to southern California where their silver and turquoise jewelry was in big demand. After the turn of the 20th century, tourism in the southwest picked up because the railroad now came out this far west and there was increased tourism to see the Grand Canyon. The Navajos would set up shop along all the train stops along the route and sell their jewelry. Tourists loved the jewelry and a market for it sprung up. Tourists bought Navajo rings, Squash Blossom Necklaces, and bracelets.

By the 1920's Navajo silver and silver and turquoise jewelry was for sale in Native American trading posts, at the Grand Canyon, and in mercantile stores across Arizona and New Mexico. Navajo jewelry now became a major industry throughout the southwest.

And people couldn't get enough of it. Even today, Navajo jewelry is in high demand. Navajo jewelry has had an important role in the history of the American western frontier and very much part of our American heritage. 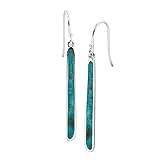 Navajo jewelry sold today still follows the classic styles from the old days but also has incorporated new contemporary styles such as inlaid silver and turquoise. There are many jewelry stores and shops around Taos where so much of it is sold. I have been in and out of the stores and up to the Taos Pueblo to see the Native American jewelry. There is so much of it here that it is difficult to choose pieces because there is just so much to choose from.

I particularly like the vintage pieces of turquoise jewelry and there is plenty of it sold here. Vintage Navajo jewelry is fifty years or older. The silver used to make the jewelry is mostly from silver coins. This silver was used before WWII and after WWII Navajos began using sterling silver. The amount of silver used in sterling silver is 92.5% silver and the rest of the content is other alloys. All true Navajo silver jewelry is stamped 925 and if doesn't have that stamp then it is not good sterling silver as it has more alloys in it. Since about 1960 the Navajo jewelry makers also sign their pieces, so look for a signature along with the 925 stamped on the back.

Jewelry made before 1930 is considered antique silver jewelry and many shops sell and trade in antique jewelry as well.

Navajo silver and turquoise jewelry took a major turning point around 1955-1960. A great increase in Navajo jewelry took place at this time because of the movie and media industry that went into a boom in the 1960's. Navajo jewelry was worn by movie stars and so it became popular with the public. Navajo jewelry production was stepped up.

At this time eastern jewelry stores set up Navajo jewelry production in the southwest and the Navajos taught their craft to these easterners. The Navajos were requested to produce more jewelry and at a faster pace to meet the market demand.

There is a big difference between the Navajo jewelry made before 1960 and this is the period that is called vintage Native American jewelry. The type of turquoise and that it was made with coin silver or sterling silver tells its age. For example, Arizona turquoise is a clear sky blue color and green turquoise is usually from Nevada.

The following photographs are of vintage and contemporary Navajo jewelry pieces. Some of the pieces are of the classic style and made today because their is much demand for these classic designs.