Origami for Harmony and Happiness

One ancient Japanese legend tells that if you fold one thousand cranes out of paper, any wish will come true. Some people do this way: they buy special paper sets and make birds for hours.

Paper is one of the mankind's greatest inventions. It was born in the East and it is there that the first paper figures were created. During its long history origami passed the way from temple rituals to the art that brings beauty and joy to millions of people all around the world.

Origami is the name of the ancient art of paper folding that comes from Japanese words "oru" - to fold and "kami" - paper.

Origami is certainly an art, because the Creator is present in it with a range of His images. Origami is fully based upon geometry, every fold is determined by the laws of mathematics, which is a way to approach most closely the Lord's secret plan.

The philosophy of paper folding

Origami resembles the system of world vision, hieroglyphs, where symbols are paper figures. Universe of objects, nature phenomena - everything is reflected in symbols, folded from paper. Surprisingly, the world shows itself related in an abstract language. Tempting to penetrate the origin of this linguistic mechanism. Things depicted in such an unusual way, are, nevertheless, universal, open to everyone. This is why origami is popular worldwide. But origami is a culture, and every culture has origins, a unique philosophy, an essential concept going back in time. While folding figures out of paper square, we have the possibility to meet something bigger than mastering skills of volume and space construction. We get the chance to penetrate the depths of the eastern philosophy. As far as contemporary design is concerned, origami has a lot of artistic principles to offer. It can serve as a study book that helps to form spacial symbols, incarnated with the help of the law of construction and art.

You take any origami and you start thinking what you need to add to it, to change in it to obtain a new model. As a result, you get pairs, three of them and sometimes whole chains of such figures that follow one another. In traditional origami these chains aren't rare. "Only change is constant". This is a great discovery of Buddhism. Indeed, what do we do if not developing a picture until the moment when the truth shows itself, without reducing a thing, yet changing? Those who call origami sculpture are wrong. Sculpture is an art with a minus sign (Sculpture by itself excludes everything that is not sculpture). Origami is an art of constant change. Ancient Greeks knew that everything flows and changes, that lightning never strikes twice in the same place. But the message they transmitted to us is completely different. Instead of discovery of the change, they turned to everything that is, if not eternal, but at least not moving. As for the Japanese, they paid their attention to fragile things, to the moment, this tiny bit, with a goal to capture the breath of eternity in it. - Heinrich Doumoulin, "A History of Zen Buddhism"

It all begins with a square

Many people are surprised to hear the word. Origami? What does it mean? But everyone at least one time made something out of a paper square, be it a plane or a boat. At the time when straw hats were not sold in shops, people would make a triangular hat out of a newspaper. Paper boats and hats are made according to origami principle.

The origami art was born in Japan. They say that it all began in 610. Who might think that from the start figures made from a paper square bore a deep meaning? In the eastern countries, a square has been respected as a symbol. In Buddhism, it is a reflection of the Cosmos, a symbol of emptiness from which everything is born. Paper has been treated respectfully in Japan, as well. It has been seen as something fragile, temporary and of a short life. They have considered that every thing like that - a butterfly, a water dew, a paper - bears the breath of eternity and it is important to know how to catch it.

From sacred rituals to pastime

Dominique Buisson, the author of the book "The Art of Japanese Paper" writes about Shintoist priests who found paper so amazing for being so pure, perfect and plastic, the qualities that they would normally attribute to gods. Clean paper was a perfect mediator between people and gods. It was possible to write a message to gods on it or create one from it. Paper manipulations were equal to prayer while sacrifice of paper was like a sacred sacrifice. Pieces of fish and vegetables were sacrificed in temples wrapped in paper boxes folded by hand and called sanbo.

During Edo epoch (1600-1868) when mass paper production was on the go, and the paper became relatively cheap, the art of origami became very popular. Actually, it turned from the art of ceremony into popular pastime. Then, a lot of common models were invented, incuding the famous crane.

Nowadays, paper folding, origami is very popular. It is possible to make a dog, a bird and even a gorilla. There is a tradition when out of one thousand paper sheets relatives of a sick person fold cranes to make the patient get better. Origami becomes popular worldwide.

The person who made origami modern

It was thanks to Akira Yoshizawa that we know origami as it is today. It was him who introduced the volume in origami and made it really live. Before Yoshizawa, there was a rule: if you cannot fold the paper figure so that it becomes flat, it isn't origami. He also invented a special universal language and signs thanks to which figures could be folded according to certain schemes.

During the Second World War Yoshizawa decorated the beds of the wounded with colorful origami figures and in 1951 he illustrated one of the articles of Asahi Graf magazine with the Chinese zodiac origami animals. After that, he became famous in Japan and worldwide. 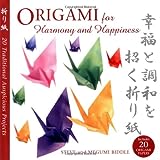