How to Photograph Metaphors and Symbolism

First the most commonly accepted meaning of a metaphor: "A metaphor is a figure of speech that describes a subject by asserting that it is, on some point of comparison, the same as another otherwise unrelated object. Metaphor is a type of analogy and is closely related to other rhetorical figures of speech that achieve their effects via association, comparison or resemblance including allegory, hyperbole, and simile. In simpler terms, a metaphor compares two objects or things without using the words "like" or "as"." Wikipedia and the definition of symbolism: "the art or practice of using symbols especially by investing things with a symbolic meaning or by expressing the invisible or intangible by means of visible or sensuous representations: asa : artistic imitation or invention that is a method of revealing or suggesting immaterial, ideal, or otherwise intangible truth or states" merriam-webster.com.

Photographing images that in one way or another stand in place of a metaphor and offer a symbol it not difficult but the photographer must carefully choose the scenes and arrangements as well as the subject matter since this project is very open to interpretation.

Man has been using symbols and metaphors for centuries mainly because words can be limiting and a picture, or in this case, a photograph can "say" more than a thousand words might be able to.

A vast majority of metaphors is used in children's books and stories because it is much easier for them to understand the meaning behind the art work than perhaps to understand a written message.

But adults often enjoy looking at images, pictures or any art work that can also serve to display a message like a well known one which says "the light at the end of the tunnel". This message is much more apparent when looking at a photograph rather than to simply reading the words.

First let us understand that metaphors and symbolism are closely related in how they are represented through photographs. Although one uses words to relate to something else and the other uses symbols they are still adaptable to include around a photo project and can be said to be mainly the same thing.

First draw a list of some of the symbols or metaphors which will form the backbone of your project and then do some brainstorming about how to compose images that capture their essence. It is good to make some rough sketches depicting more or less how you want the scene to look.

Afterwards, seek out scenes that are already in place or start formulating a plan in how to either digitally edit the images or set up the arrangements and other elements to create the look that you are looking for.

You will probably will need to use a digital program sooner or later, especially if your creations are elaborate or you choose symbols that are hard to find. Nature will offer you plenty of samples like tunnels, tall rock formations, menacing bodies of water, obstacles not to mention an abundance of beauty.

Depending on the mood that your metaphor aims to set this can be accomplished rather quickly provided that your location features naturally occurring scenes.

Whic metaphor would be easiest to create?

Do not be afraid to try new things and especially ones that seem very simplistic. Look at the image of the broken pencil. Very simple, can be done almost anywhere and even if you cannot find a pencil with the rights words, having one made is relatively inexpensive. Yet this photo of a broken pencil laying on the ground with the word "environment" on it is almost universally accepted as man's destructive actions upon our environment.

There are many other themes that are just as easy to recreate. For example, the symbol "light at the end of the tunnel is easily done by posing a subject at the end of a dark tunnel or corridor or even an alley and adding a light source directly behind the subject. The subject will appear as a silhouette, which helps the theme, and everything in front of the subject will be lightly lit. This is yet another sample of a universally regarded symbol for this metaphor.

Another easy scene would be to locate a rock wall like those used instead of a fence to form a property barrier. Have one person on top and extending a helping hand to another at the bottom. This metaphor is most likely to be interpreted as "teamwork" or "lending a helping hand."

For more inspirations you only need to visit some offices and other workplaces where you are bound to find many inspirational posters that speak of team work, achieving goals and so on. All of these types of motivational posters use symbolism and metaphors to bring their message out and will serve to give you general ideas of what sorts of subjects make good subject matter.

The idea is not to get so complicated in your scene set up that it makes it really hard to bring everything into play. As I have said in previous occasions, simplicity is often the best alternative. 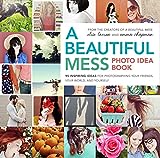 A Beautiful Mess Photo Idea Book: 95 Inspiring Ideas for Photographing Your Friends, Your World, and Yourself
Buy Now

Above all plan your shoot carefully and try to anticipate any shortcomings such as weather and time delays. It is better to take more gear than you might need to do the shoot properly. Better have more than you need than not enough.

Among the gear to have in hand is a good zoom, a regular lens and a good flash unit. These are the basics but it is good to know that you have other pieces of equipment should you need to.

You really do not need professional models. Your friends and family are likely to lend you a hand and be part of your work. If however, your theme will clearly show faces and people, and you also plan on submitting them to publications, then a professional model and makeup artist may come in handy.

Consider all aspects before enlisting the aid of assistants and models such as fees and accommodations as well as model releases.