The Pittsburgh Steelers play in the National Football League in America and they are one of the most successful teams in N.F.L. history. When it comes to their fan base, they are die hard fans that bleed black and gold. Most experts could argue that the Steelers fans are probably the most loyal fans in all of sports and they can be found all over the world. Many Steeler fans choose to get tattoos to symbolize their love for the team. Anything goes in "Steeler Nation".

The Steelers are the prime example of hard work and dedication, but success wasn't always there for this blue collar team. The Pittsburgh Steelers was founded in 1933 by Arthur J. "Art" Rooney. Pittsburgh was the seventh team to join the league. Since the team was founded in 1933 to now, the Rooney family has always been owners. The Rooney family is a prime example of ownership and they could be considered the best owners in all of sports.

The 1930s were terrible for the Pittsburgh Pirates. Pittsburgh copied the name of the cities baseball team. Pittsburgh was only 24-62-5 in the first 8 years of their existence. Pittsburgh never finished higher then a .500 record during the 30s. Their highest place in the division was only second.

In 1940, Rooney was tired of the Pirate name so he ran a contest to figure out a new name for his football team. Since Pittsburgh was known as the "Steel City", they decided to call themselves the "Steelers". Rooney actually sold his team during the 40s and bought half ownership of the Philadelphia Eagles. He would later regret the decision and he worked with both teams and they equally divided players on both teams. With a new name and new team, spirits were high, but World War II would cause his plan to fail. However, the Steelers did make their first playoff appearance in 1947 but they didn't make the championship.

The 1950s and 1960s were more of the same thing. In fact, during the first 39 years of Pittsburgh existence, they only won 24 games. They were 24-62-5 during the 39 year stretch. During the 39 year run, Pittsburgh only managed 8 winning records. But during 1969, they made the best hire of their franchise. The Pittsburgh Steelers hired Chuck Noll to be their head coach.

The first few seasons didn't go well for coach Chuck Noll. During the 1970-1971 season, Pittsburgh went 5-9. Pittsburgh improved the following year, but only by one game to finish 6-8. However, few knew that the Steelers were laying the foundation of their dynasty. The Steelers made great draft choices when they drafted Terry Bradshaw(1970), Nel Blount(1970), Jack Ham(1971), and Franco Harris(1972). The 1973 season was a huge success. Pittsburgh went 11-3 and made the playoffs for the first time since 1947. They would eventually lose to Miami in the conference championship.

FOR THE STEELER FAN 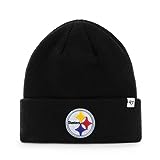 The following season, the Steelers drafted what is considered the best class in draft history in 1974. Mike Webster, Jack Lambert, Lynn Swan, and John Stallworth were all drafted by the Steelers. All four players would end up in the Hall of Fame and all of them won four Superbowls.

The Pittsburgh Steelers finished 10-3-1 that season and make it all the way to Super Bowl IX. The Steelers met the Vikings in what was a defensive struggle. The Steelers mainly relied on their new tough defense that would be later called the "Steel Curtain". Pittsburgh defeated the Vikings 16-6 and won their first N.F.L. Championship.

The 1975 season was more impressive as the Steelers finished the regular season at 12-2. They ran through the conference and went to the Super Bowl to play the Dallas Cowboys. The Steelers held on to a 21-17 victory to win their second consecutive championship. In 1976, the Steelers lost 4 of their first 5 games, but managed to make the playoffs with a 10-4 record. They managed to make it to the conference championship, but lost to the Raiders 24-7. In 1978, the Steelers finished at 14-2 and met the Dallas Cowboys in the Super Bowl. In what some call the best Super Bowl ever played, Pittsburgh held off a late Dallas rally to win their 3rd N.F.L. championship 35-31. In 1979, the Steelers managed a 12-4 record and went back to the Super Bowl. Late in the game, Pittsburgh was able to pull away from the L.A. Rams to win 31-19, their 4th championship since 1973. The win preserved one of the greatest dynasties the N.F.L. has ever seen.

The 1980s proved to be another rough patch for the Pittsburgh Steelers. Most members of the dynasty retired during the early 80s. In 1992, Pittsburgh hired headcoach Bill Cowher and he proved to be the missing link. Coach Cowher led the Steelers to the playoffs in every season of his first six years, which is a record. The Steelers were back in the Super Bowl in 1995 against the rival Cowboys. Dallas was able to revenge their previous two losses to the Steelers in a 27-17 win.

The turn of the decade saw continued success for the Steelers. In 2004, Pittsburgh drafted quarterback Ben Roethlisberger. As a rookie starter, Ben didn't lose one game that season, which is a rookie record. The Steelers went on to win the Super Bowl against Seattle 21-10. Pittsburgh went on to win another Super Bowl in 2008 against Arizona 37-23. They also played in the Super Bowl in 2010, but lost to Green Bay 31-25. All together, Pittsburgh has won 6 Superbowls and played in 8. To date, the Steelers are one of the top tier teams in the N.F.L.