It is a balmy 32 degrees in Northwest Pennsylvania and my grandson and I have made our way to a creek behind my house to find a stone. Not just any stone, but a stone to cover the entrance to the tomb in our resurrection garden.

On our Easter craft night, we created four fun crafts and had one activity which are just too good not to share.

Please see the directions below for:

The items needed for the Resurrection Garden are as follows:

Build the soil up around the small pot as show in the picture above. Plant grass seed and water. Lay pebbles and rock as desired. Use sticks and twine to fashion crosses and stand them on the mound. You can get creative using your own ideas with different plants and props. The great thing about the grass seed is watching it grow quickly. You should see the grass start to grow after five days.

The homemade play-dough tomb is something my children and I did every Good Friday. After making our own dough, the children would have fun playing with it before we fashioned the tomb and laid Jesus inside. Of course, the first thing the children saw on Easter morning was not their baskets, it was Jesus standing outside the tomb reminding them of the real reason for the season.

My grandson loves his resurrection eggs and they help him count down the 12 days until Easter. Each slot contains an item that helps the child learn of the Easter story as they count down. The slots are numbered and a card with the corresponding number contains a scripture passage to help tell the story.

Directions and scripture passages to go with the items are as follows:

Matthew 21:9: Then the multitudes who went before and those who followed cried out, saying: “Hosanna to the Son of David! ‘Blessed is He who comes in the name of the Lord!’ Hosanna in the highest!”

Matthew 26:14-15: Then one of the twelve, called Judas Iscariot, went to the chief priests and said, “What are you willing to give me if I deliver Him to you?” And they counted out to him thirty pieces of silver.

Matthew 26:39: He went a little farther and fell on His face, and prayed, saying, “O My Father, if it is possible, let this cup pass from Me; nevertheless, not as I will, but as You will.”

■Piece of Leather or Fabric (represents the whip)

Mark 15:15: So Pilate, wanting to gratify the crowd, released Barabbas to them; and he delivered Jesus, after he had scourged Him, to be crucified.

■Tiny crown made from Grass or Stem (represents crown of thorns)

Matthew 27:29: When they had twisted a crown of thorns, they put it on His head, and a reed in His right hand. And they bowed the knee before Him and mocked Him, saying, “Hail, King of the Jews!”

Matthew 27:31: And when they had mocked Him, they took the robe off Him, put His own clothes on Him, and led Him away to be crucified.

Matthew 27:35: Then they crucified Him, and divided His garments, casting lots, that it might be fulfilled which was spoken by the prophet.”

■Toothpick - break off one end (represents the spear)

John 19:34: But when they came to Jesus and saw that He was already dead, they did not break His legs. But one of the soldiers pierced His side with a spear, and immediately blood and water came out.

Matthew 27:59-60: And when Joseph had taken the body, he wrapped it in a clean linen cloth, And laid it in his own new tomb, which he had hewn out in the rock: and he rolled a great stone to the door of the sepulchre, and departed.

Matthew 28:2: And, behold, there was a great earthquake: for the angel of the Lord descended from heaven, and came and rolled back the stone from the door, and sat upon it.*

*There are different versions of resurrection eggs and some even leave the 12th slot empty to represent Christ's resurrection.

Want to dress us one of those cheap Easter egg dying kits? Try something you probably have in your cupboard - dental floss. Using a tiny piece of tape, secure the floss to a dry egg and wrap tightly in whatever pattern you choose. When you are finished, secure the end with a tiny piece of tape and sink the egg into your favorite color. After the color is processed to your desired shade, remove the egg, dry with a paper towel and remove the floss. Like a piece of modern art, your egg stands out among the others.

(For more ideas, click on my hub - 10 Unique Ideas for Decorating Easter Eggs.)

Load up plastic eggs with small LCD battery-operated lights and hide in the dark for a glowing fun time. Whether inside or out, finding a glowing egg is magical and they are beautiful in any Easter basket as well. 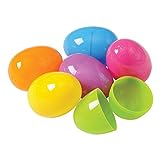