Who was Francisco De Goya?

Francisco de Goya (1746-1828) was Spanish painter who painted works that dealt with people and their state of emotion, their private moments, their suffering and their deprivations. He was the official court painter to Charles IV and also became the director of the Spanish Royal Academy. He was popular with the rich, who all wanted him to paint their portraits. Goya’s works also portrayed the corruption that surrounded the Spanish monarchy. In acquiring experience to the Napoleonic wars and the involvement of the Spanish government, Goya’s outlook on humanity contorted into hostility. These experiences left Goya to near deafness by the age of 46 as expressed through the growing intensity of his works such as The Third of May, 1808 and La Leocadia.

Spaniard, Francisco de Goya lived in the eighteenth century, also known as the ‘Age of Enlightenment’. This was a time when reason overcame the gloom of feudalism. The Enlightenment period was an European intellectual movement against traditional conditions. However Spain, encountered turmoil and stress during this progress. The Third of May, 1808 painted from 1814 to 1815 by romantic artist Francisco de Goya violently reacts to the historical battle at Medina del Rio Seco in Spain. This recounts the invasion of Napoleon's troops into Medina del Rio Seco whereas they were affronted by 21, 000 Spanish troops defending their city. The painting depicts the condemned men defencelessly at the mercy of a firing squad on hill Príncipe Pío. Hence, Goya evocatively reacts to the prospect of war brutality in regards to the human condition through his impassioned view of war.

The Third of May, 1808 without question is one of the most significant anti-political artworks produced in the nineteenth century. Goya testaments to the horrors the Napoleonic wars. The immense artwork nine by eleven feet accentuates the savagery of war. Goya composed religious symbolism through the inclusion of the Roman Catholic Church far in the background, linking the terror of the civilians to the origins of this war, accentuating the greed of power and man’s perpetual inhumanity.

Cleverly, Goya divisions his figures in four distinct groups; already dead civilians, the next targets, those waiting in the face of predestined death and the executioners. The dead and those fated create a single group, with an obscure sky, that submerges the country in ethereal darkness. Hence, the composition of the figures and the effective use of the background, Goya responds to the oppression under the Roman Catholic Church.

The Third of May, 1808 creates a paradox to the motivations of the Enlightenment through contrasting it with the abuse of the human condition. The subject of the painting is the shocking nature of war. The usage of space paints a dormant visage for the background. This contrasts the French romantic artworks such as the, Murat at the Battle of Aboukir by Antoine-Jean Gros which glorifies the Enlightenment through its congested composition of the figures and dynamic movements. Hence, Goya challenges French romanticists who traditionally incorporated the idealism of patriotism and heroism through Napoleon.

Murat Defeating the Turkish Army at the Battle of Aboukir

According to Napoleon, “Religion is excellent stuff for keeping common people quiet. Religion is what keeps the poor from murdering the rich.” In reaction to this Goya creates a bitter glorification of ordinary people. Furthermore the ideals of purity contrasts with dahlia, blood spilling from the cadaver on the floor as his face is upturned to the audience. His arms are motionlessly splayed out in the same position of the martyr. The state painting evokes the people’s suffering as the work is an evocative statement against of civil injustices of French soldiers executing Spanish hostages. Hence, through the symbolism and composition of the villages Goya harshly responds to the corruption of the Roman Church and politics.

The iconic romantic work, the Third of May, 1808 depicts a martyr against oppression and brutality. The gunmen’s faces are concealed from the audience, creating a claustrophobic atmosphere. This is to diminish individuality from each soldier as the facade is to shed light to the cowardice of France and authorisation. The firing squad soldiers hold bayonets up close to the victims conveying elements of horror and evokes an outraged reaction at the atrocity from the audience.

As x-rays shows indicates no major changes in the composition, instead revealing the usage of sharp materials on the guns, thus emphasising the use of drama. Thus, the cruelty of these soldiers is exposed in the mechanistic formations with their backs to the viewer, contrasting with the audience’s attention to the individuality of the victims’ faces and bodies with expressive postures and expressions. Therefore, Goya graphically opposed the Napoleonic oppression in regards to the human condition.

Goya’s painting is commended for its intense manipulation of Christian iconography and its ardent portrayal of the inhumanity of man. Goya reacts to the Napoleonic wars through the war’s roots; religion. The dominant figure is a martyr for the rest of the town as his eyes, the big ebony cornea ringed in a pasty white, widened in alarm as the prominent ‘X’ shape of his body draws attention to the figure, provoking the attention of the firing squad.

The glow of the lantern’s, sitting between him and the firing squad, illuminating light sheaths him in a spiritual light. The ivory pallet of his shirt contrasts with the other Spaniards whose clothing is constructed of pallets of dull colours, representing dirt and blood. Hence, Goya’s painting comparatively presents an anti-hero, engulfed with true pathos as he doesn’t perish in battle, but on the side of the road. Thus, Goya graphically opposes Napoleonic oppression in regards to the human condition.

Additionally, the central figure of the painting, takes the place of the Crucified Christ; as his arms spread in a "V" as a plea for peace. Goya reinforces this by referring to the stigmata, the nail wounds in Christ’s hands, appropriating Matthias Grunewald’s ‘Crucifixion, 1600.’ The monk’s pose has been further appropriated in contemporary artworks such as George Gittoes “The Preacher” (1995) which invokes the religious conventions that’s depicted in “Third of May, 1808.” Ergo, Goya incorporates religious elements to create irony, challenging the consequences of the Enlightenment period. 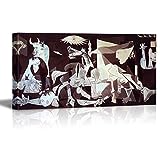 The subject matter relates closely to Pablo Picasso’s huge painting, ‘Guernica’ (1937) whose political and social reactions to humanity adopts the romantic ideas of the movement, political corruption and subject matters from an emotive perspective. Like Goya’s work this painting once again captures and documents the suffering of innocent civilians, inspired by the bombing of the Guernica, the ancient capital of the Basques in northern Spain, during the Spanish Civil War. Symbolically the principal person is appropriated in Guernica with a dramatic use of sepia tones.

Shapes such as the light bulb's dome of light casts a triangular glare down the work. This in relation to the lantern suggests Picasso’s knowledge of Goya’s work and the perpetual issues of war as challenged by romantics. Therefore the inclusion of the principal person is a clear reflection of the romantic’s opposition to political and religious corruption which resulted in inspiring artists such as Picasso.

The Black Paintings are a series depicting Francisco De Goya’s psychological, social and political turmoil in 1819-1823. La Leocadia is one of the final of the Black Paintings which Goya painted in his seventies. He created this after fleeing to the country from his position as court painter in Madrid. This experience incorporates an intense awareness of mortification, hysteria and anguish. Goya survived through two near-fatal illnesses, his anxiety evolving and monopolizing with his ascending fear of relapse. The series encapsulates Goya’s eerie and intense anxiety towards being drawn to insanity, and his perceptions of humanity.

The title The Black Paintings, originated from the palate of dark pigments as somber subject matters are imbedded within his personal works such as ‘Leocadia.’ The prominent figure in this painting was identified by Brugada, who knew her, as Leocadia Zorilla, the woman who lived with Goya during the last years of his life, and the mother of Rosario Weiss. Despite the multiple explanations offered by art historians these works continue to be mysterious and enigmatic, yet they present many of Goya’s the esthetic problems and moral considerations.

Close up of La Leocardia

Goya’s highly subjective Leocadia created frightening visions inspired by a dark view of the destiny of the human race. The work mimics his internal and external isolation, allowing him to explore his fears where, “the sleep of reason produces monsters.”Goya applied paint directly onto the walls with a mixed technique since chemical analyses identified the use of oils in these works. An elusive transparent veil masks Leocadia as she leans against a tomb, confronting the audience with a melancholic expression. This refers to the near-death experiences suffered by Goya in 1819 caused by his illnesses. Goya’s work reflects the artist’s concern for his own mental instability and health.

“Fantasy, abandoned by reason, produces impossible monsters; united with it, she is the mother of the arts and the origin of marvels,” according to Goya. His romantic works uses colour and contrast to darkly comment on his paranoia and melancholy. Leocadia’s figure remains ominous and gloomy, “I see only forms that are lit up and forms that are not. There is only light and shadow.” The style employed by Goya is very personal, using long and violent strokes that characterise the entire series. The ghostly gold hues of the background merges with the pallid skin of her face, contrasting with the obsidian of Leocadia’s funeral Maj dress.

Additionally, the subject matter of a funeral achieves ‘empathy with the human condition’ as he records the of dread of being at the mercy of his own trauma and impending inevitability of death who is, “ the mother of the arts and the origin of marvels.” Thus, his work responds to his cultural time and the impact of psychological trauma; Leocadia emphasises the significance of emotion that characterises Romanticism.