Please watch the video below which will begin to reveal the secrets of 3d street art illusions in action, see the illusion working right before your very eyes.

Follow on through the information below it to find out how you can make your own 3d anamorphic illusions using photo editing software.

The information on this page will show you how the 3d anamorphic optical illusion works, with real life examples and videos to help you understand this interesting illusion. This will open your eyes to 3d street art optical illusions and provide you with the secrets to do this yourself.

Please watch the video below to see this illusion work in real life you will be amazed at how this really is a clever trick, something magicians have been using for hundreds of years except they do not tell you because it would spoil the fun.

Below you will see the original photograph of the lighter standing upright on a piece of paper, used to create the illusion of a 3d anamorphic perspective in the video . In order to produce this illusion the whole picture needs to be distorted by making use of a photo editing software, the main one I prefer is GIMP, it is free and works really well. GIMP can be obtained if you follow this link to it and there is no need to spend $500 because its free.

The next image below has been distorted in order to make the vertical edges of the paper on which the lighter is standing on look normal and at a 90 degree angle with the bottom horizontal edge of the paper.

Doing this makes the top of the lighter somewhat bigger than the bottom, as this will be needed to make up for the distance between the camera lens and the image when it is lying flat on the surface of the table.

You might think that the image is not very different from the one above it but but believe me it is. In fact if you don't believe me measure it and you will find it is about twice as wide as the bottom or as it would be normally compared with the original image above it.

In the next image below you will notice that it is being stretched upward, resizing it to about twice its original hight, again this is to compensate for the distance that the top part of the lighter image will be from the camera lens.

Normally the further away things are from you, the smaller they look, so to compensate for this they have to be made bigger, this will trick the eye into believing that they are closer than they actually are. 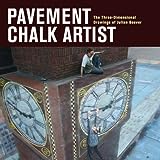 Pavement Chalk Artist: The Three-Dimensional Drawings of Julian Beever
I bought this book, Pavement Chalk Artist, from Amazon and was very pleased to find out more about the man himself. In the book Julian Beever explains how he came to be a street artist and how anamorphic perspective was a big turning point in his life as a street artist. A book worth owning if you are interested in the work of modern day streets artists.
Buy Now

Finally the image below is the what was used to make the video and create the 3d anamorphic illusion, notice how it is elongated and wider at the top end than the bottom end to compensate for the distance as already explained. I have put the two images together side by side so as to be able to see the difference.

There you have it 3d anamorphic perspective secrets revealed, will 3d street art ever be the same now that you know the secret?

Anamorphosis and the 3d anamorphic perspective is not a new phenomenon, it was used hundreds of years ago in great churches to glorify God and the celebration of the existence of God. There are many great works that can be seen as examples of this, with the most celebrated exponent being Andrea Pozzo.

The modern day equivalents of this are street artists such as Julian Beever who is a very popular example of the work being publicised and celabrated all over the world, through the use of 3d anamorphic drawings.

Out of Balance, a fine example of anamorphic perspectives, well made and gives further insight by taking you behind the illusion, thanks to Ben Woodhams.