The Ancient Art of Naalbinding

Athlyn Green is an avid crocheter and knitter. She designs and sells handcrafted goods.

An Ancient Form of Viking Knitting Resurfaces in Modern Times

Twenty-first century crafters have discovered the art of medieval naalbinding, turning to a form of ancient knitting that involved knitting with one needle. Knitters have adapted this method for use in modern times.

How does naalbinding knitting differ from the knitting we know of today? Naalbinders use a spiral knitting technique that connects one row to the next and to the loops on either side. It is a challenging craft, one that is time-consuming and labor-intensive, but modern naalbinders gain a better understanding of crafters that have gone before, and they feel the results are well worth the effort.

What makes naalbinding distinctive is that a person doesn't have to use patterns to produce knitted goods. Each naalbinder develops his or her own particular style and this is expressed in unique, one-of-a-kind creations.

Needle-binding is similar to sewing, darning but because yarn is used, it produces a fabric that looks similar to that which is knitted. Naalbinders use a single-eyed needle and yarn to create a series of loops, which makes every stitch secure and produces a stretchy material. Increases are made by working two stitches into one stitch in the previous row; decreases involve combining two stitches.

Short lengths of yarn are used because the yarn is pulled all the way through each stitch. Yarn is added as a piece progresses. Colored yarns are also woven into the work.

Sturdy Mittens Made With Naalbinding

Naalbinded items have been found in different parts of the world, some fragments dating back to the neolithic period. Items have been discovered in Iceland, Finland and Poland, to name a few.

Naalbinding continued in Scandinavia and the mountain areas of Central Asia, probably due, in part, to climate.

While, In other locations, knitting largely replaced naalbinding, the craft still survived over the centuries in certain areas and thus, has come down to us from antiquity and gives us insights as to how warm and sturdy garments were made in the past.

Literally translated as "needle binding" or "binding with a needle," naalbinding is a time-honored method of creating fabric that is considered to be older than crocheting or knitting. The process was based on:

• Naalbinding can be quicker than knitting because each row's height may be equivalent to 2-3 rows of knitting.

• Unlike knitting, Naalbinding does not unravel.

This ancient knitting method required many hours of labor, using a bone needle and wool to construct almost indestructible warm garments, such as knitted socks, leggings, mittens, gloves, hats and scarves, and other necessary clothing items. In a sense, naalbinded garments were survival gear, which equipped these hardy and hard-working people to protect themselves against the elements.

Norse naalbinding ranged from simple stitches to very complicated techniques. It is believed that over one thousand variations of naalbinding are possible.

On the Northern Tip of Newfoundland, Naalbinding is Alive and Well

A visit to L'anse Aux Meadows up in St. Anthony, Newfoundland, offers knitters a way to step back in a time. Knitters can tour Norstead, the Viking village, and chat with women dressed in traditional garb, seated 'round a fire and knitting with one needle. A shop on the site offers an assortment of naalbinded items, such as warm socks, mittens, hats and scarves, a delight for visitors who want to purchase naalbinded items.

Getting to Norstead Viking Village 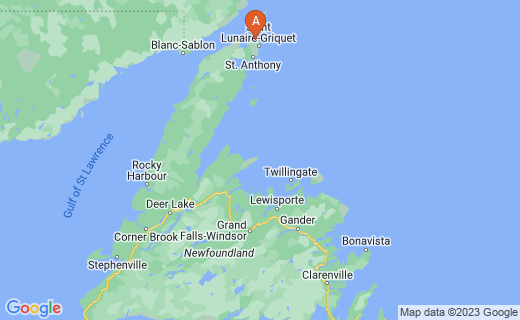 When winter winds were howling, ancient people passed the dark winter months creating many useful and usable items for their families.

A Look at Naalbinding: Knitting With One Needle

Nalbinding - What in the World Is That?: History and Technique of an Almost Forgotten Handicraft by Ulrike ClaÃŸen-BÃ¼ttner (20-Apr-2015) Perfect Paperback
Buy Now

Different stitches are used in Naalbinding, some relatively easier and more common and others more complex.

Pattern codes describe the action needed: "go over or under" and how many times, thus someone reading directions might see codes like: O/UO, UO/UOO, and any number of variations.

Different variations of naalbinding are used to yield different degrees of both elasticity and thickness when creating fabric.

If you want to learn naalbinging, attending a class can be a real boon, but if there are no classes in your area, a good instructional book can guide you.

How do Naalbinded Stitches Differ From Knit Stitches?

At the end of a row, the work is turned, and each stitch is now passed through its partner but also in a loop from the previous row. This makes for sturdy fabric.

As with knitting, the work may also be performed "in the round," depending on what item is being created.

The stitches can be made on the thumb or off the thumb.

In modern times, the art of naalbinding has enjoyed a revival as interest has grown in this ethnic knitting style. This method has been turned to as a valuable resource for crafters who desire to master different knitting techniques to produce naalbinded items for their own use and/or for cottage industries.

Have You Seen Naalbinded Pieces?

Certainly, the past steps on the heels of the present as knitters master a style of knitting that once spelled survival for our hardy forebears who produced many useful and warm items using natural materials they had on hand, and thus were well-equipped to brave challenging temperatures on land and at sea.