Was Marcel Duchamp the Anti-Artist?

Did Duchamp think so little of art that he wanted to destroy it?

As an artist, Marcel Duchamp is hard to classify – but he almost certainly wanted it that way. During his career, just when everyone thought they knew what he was, a Cubist, for example, or a Surrealist, he switched to another style or no-style, left town or the country or stopped being an artist and went off and played chess in tournaments.

Duchamp also spent time trying to define what art is. In the process he produced “ready-mades” such as Fountain, a urinal with his pseudonym painted on it. Could this industrial product be a work of art? Duchamp suggested it was up to the viewer to decide.

So, was Marcel Duchamp the anti-artist?

Please keep reading to find out:

Marcel Duchamp was born in Rouen, France in 1887. Duchamp was the fourth of seven brothers and sisters. His two older brothers, Gaston and Raymond, and his younger sister Suzanne, also became artists.

Duchamp’s earliest paintings were Impressionistic, such as the Church at Blainville (1902). In a lecture in 1964, Duchamp said, “My contact with Impressionism at that early date was only by way of reproductions and books, since there were no shows of Impressionist painters in Rouen until much later. Even though one might call this painting ‘Impressionistic’ it really shows only a very remote influence of Monet, my pet Impressionist at that moment.”

Unless otherwise stated, all quotes in this article come from the book, Marcel Duchamp by Dawn Ades, Neil Cox and David Hopkins.

Duchamp joined his brothers in Paris in the autumn of 1904, during the so-called belle époque in Paris in the years before World War One. At this point, Duchamp spent much of his time doing pencil drawings of his friends. Perhaps his greatest influences were the caricature and poster artists working in Paris.

Duchamp polished his wry wit and ribald jocularity by studying the work of author Charles Baudelaire, who asserted that comic artists must demonstrate the dualism of the human being, taking the position of one who laughs and one who is laughed at.

In 1908, after seeing an exhibit of the work of Henri Matisse, who fronted a rebellious group of painters known as the Fauvists, Duchamp began to paint in a serious way.

In paintings such as The Bush (1910) and Baptism (1911) Duchamp showed his male fascination for female closeness and lesbianism. Other artists who evinced similar interest were Pierre Girieud, Toulouse-Lautrec and Picasso.

Duchamp’s painting The Chess Game (1910) hints at his later fondness for the game of chess. In The Chess Players (1911), a much more abstract work, he showed an interest in Symbolism as well as skepticism for Cubism.

As Duchamp moved toward ideas about movement and the mechanical and, using the vocabulary of Cubism and Futurism, he produced Sad Young Man in a Train (1911), which anticipates his fascination with figures descending a staircase. This painting could also be a kind of self-portrait, as the figure in the center looks a little like Duchamp and appears to be smoking a pipe, as he did throughout his life.

In 1911, Duchamp joined a group of artists known as the Puteaux Group, whose work was called Orphic Cubism. At this point, Duchamp became interested in depicting a fourth dimension in art, which could include movement, transition, distance, time and even mental activity, such as in his painting, The Chess Players.

The repetition of linear elements used in the painting, Sad Young Man in a Train, is what Duchamp called “elementary parallelism,” a dynamic technique which became much more obvious in his following work, Nude Descending a Staircase No.1 (1911).

Edward Burne-Jones’ painting The Golden Stairs (1872) seems an obvious inspiration for Duchamp’s next work, Nude Descending a Staircase No. 2 which, because of its Symbolist possibilities, got a negative reception at the Salon des Indepéndents in March 1912. The chairman of the hanging committee wanted Duchamp to change the title, because it seemed to have a comic effect, but Duchamp refused and withdrew the painting.

Nude No. 2 shows a figure with cubist facets, one superimposed upon the next, as it descends a stairway, evoking images of chronophotography. Interestingly, the figure doesn’t appear male or female; in fact, it could have been an automaton or machine, particularly in light of the machine esthetic of the time. Nevertheless, even though Duchamp loved machines, he didn’t share Futurism’s optimism of a machine-dominated future.

Contrary to the style of many artists, Duchamp wrote the title of the painting in the lower left-hand corner. Since his titles were often poetic in nature, many critics accused him of producing “esoteric” artwork.

By the latter part of 1912, Duchamp developed dissatisfaction with painting. At an exhibition of aviation technology he attended with his friend, artist Constantin Brancusi, he told Brancusi: “Painting is finished. Who can do better than that propeller? Tell me, can you do that?”

By 1913 Duchamp was definitely moving away from Cubism, producing a decidedly mechanical work entitled, The Chocolate Grinder No. 1. During a lecture in 1964, he commented on this piece: “Through the introduction of straight perspective and a very geometrical design of a definite grinding machine like this one, I felt definitely out of the Cubist straightjacket.”

Duchamp continued working with “mechanical art,” producing the Large Glass, a multi-media work on two glass panels, also known as The Bride Stripped Bare by Her Bachelors, Even (1915-23). Interestingly, hoping to escape the carnage of the Great War in Europe, Duchamp began work on the Large Glass while living in New York City.

In 1935, Surrealist leader André Breton described the Large Glass as a ”mechanistic, cynical interpretation of the phenomenon of love: the passage of woman from the state of virginity to the state of non-virginity taken as the theme of an asentimental speculation – one might say an extraterrestrial being applying itself to imagine that type of operation.”

In doing the Large Glass, Duchamp’s intent was to reject “retinal art,” which was purely visual and required little thought to understand. The upper panel of the piece was designed to be the heavenly realm of the virgin, while the lower panel was the imperfect realm of the bachelors.

While living in NYC Duchamp hung out with fellow artists such as Alfred
Stieglitz, Joseph Stella, Beatrice Wood and Man Ray, manifesting an iconoclastic, proto-Dada atmosphere. And, in 1920, Duchamp introduced his alter ego Rrose Sélavy, an androgynous character photographed by Man Ray in 1921.

From 1912 onward, Duchamp avoided involvement in artistic movements such as Cubism, Dada and Surrealism. However, he did say that he had Dada’s non-conformist spirit, which every century has existed in man.

Duchamp’s most anti-art public gesture came in 1917 when he signed a urinal with the pseudonym R. Mutt, entitled it Fountain and then entered it in an exhibit in NYC. Critics called Fountain immoral, vulgar and/or plagiarism. In an editorial, Duchamp wrote, “Mr. Mutt’s fountain is not immortal, that is absurd, no more than a bathtub is immoral. It is a fixture that you see every day in plumbers’ windows.”

Regarding Fountain, in her essay “Buddha of the Bathroom,” critic Louise Norton wrote, “To an innocent eye, how pleasant is its chaste simplicity of line and color! Someone said, ‘Like a lovely Buddha,’ someone said ‘Like the legs of the ladies by Cézanne.’ This notion of the innocent eye, blind to the scatological implications of the object, refers to the idea shared by Futurism and Dada that they were ‘primitives of a new sensibility.’ Finally, she asked, “Is he serious or is he joking? Perhaps he is both.”

In 2004, Fountain was selected as the “most influential artwork of the twentieth century” by 500 well-known artists and historians.

Considered to be the first ready-made, Duchamp introduced Bottle Rack in 1914. This was a simple bottle drying rack that Duchamp has signed.

Duchamp extended the ready-made esthetic in 1919 by producing a cheap chromolithograph reproduction of the Mona Lisa, to which he added a goatee and moustache and the inscription L.H.O.O.Q., which, translated from French to English reads “she has a hot ass.” Duchamp described it as a “combination ready-made and iconoclastic Dadaism.” Later, in conjunction with Duchamp’s Rrose Sélavy alter ego, the work was considered indicative of his creative androgyny.

By 1923, Duchamp ceased being an artist and played chess instead, eventually becoming a chess master, though he never quit tinkering in art.

During a BBC radio interview in 1959, when asked if ready-mades should be considered art, Duchamp replied: “That is the very difficult point, because art first has to be defined. Alright, can we try to define art? We have tried, everybody has tried and in every century there is a new definition of art. Meaning that there is no essential, no one essential, that is good for all centuries. So if we accept the idea of trying not to define art, which is a very legitimate conception, then the ready-made can be seen as a sort of irony, because it says here it is, a thing that I call art, I didn’t even make it myself. As we know art etymologically speaking means to ‘make, hand make,’ and there instead of making, I take it ready-made. So it was a form of denying the possibility of defining art.”

Sometimes, Duchamp had ready-mades produced to his specifications, making a kind of “assisted” ready-made, a prime example of which was the work entitled, Why Not Sneeze Rose Sélavy? (1921).

Duchamp’s last artwork was entitled Etant donnés or Given: Maria, the Waterfall and the Illuminating Gas. This multi-media piece, a kind of installation art, took Duchamp some 20 years to complete, from 1946 to 1966. But the work wasn’t exhibited until 1969, a year after Duchamp’s death in 1968.

The outside of Etant donnés shows a ramshackle wooden door surrounded with brickwork One must look through a peep hole in the door to see the tableau inside: a woman’s nude body, her face hidden, lies face up in a bed of grass, her hand holding a shining gas lamp. The background of the scene shows a waterfall within an idyllic landscape.

During one of Duchamp’s lectures in 1957, while addressing the meaning of art, he said: “The spectator experiences the phenomenon of transmutation; through the change from inert matter into a work of art, an actual transubstantiation has taken place.”

Well, was Marcel Duchamp the anti-artist? He appeared to think art was too important to be dismissed entirely, though his Dadaist roots made him appear otherwise. At any rate, he acknowledged that art was difficult to define and did he best to do so, in a fashion, by introducing ready-mades to the world. In essence, he exclaimed, “There it is, now you tell me what it is!” His life’s work tended to show that if art wasn’t anything the artist wanted it to be, then it must be in the eye of the spectator.

Then again, Duchamp knew there was good art and bad art, but who was to be the judge of that? Perhaps his legacy will instruct us all. 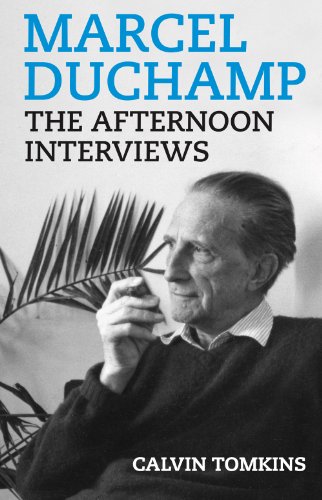