Ilona has gardened actively for most of her life and has been a writer and webmaster online since 1998. Homeschooled all 10 of her children.

The Marriage of Botany and Art

Botanical art is related to science, dissecting the parts of plants and accurately depicting them, but there are superb artists who have created more than merely an illustration of a plant or flower.... they have made pictures that we love to look at with beautiful colors and renderings that go far beyond the relay of mere information.

Whether you wish to teach yourself to draw beautiful botanical art or collect some wall art, or maybe just while away some time gazing at the artistic artistry, this page offers you a focus on some of the fine points of some great botanical art.

What is the difference between botanical art and illustration?

Definitions from Botanical Artists of Canada:

Botanical art is found between the overlapping fields of floral fine art and botanical illustration. Focusing on plant material, the purpose of the art is what differentiates the definition.

Some of the earliest examples of botanical art may be seen on the walls of Egyptian tombs and temples. As the discipline of medicine grew, so did the need to properly identify medicinal plants. Many early botanical illustrations were for this purpose.

The pictures are beautiful.

Some of My Favorite Botanical Artists

They are all women artists

Elizabeth Blackwell, born in 1707, was a Scottish botanical illustrator who produced the work 'A Curious Herbal'. Her life must have been one of difficulty: marrying Alexander, who was trained as a physician, they were forced to leave Scotland after charges that he was not properly trained to practice. On to London, where he ended up in debtors prison after trying to flout strict guild rules in his new profession of running a print shop. Elizabeth's work on her herbal helped pay off the debts. He then left for Sweden -leaving his family behind, where he was executed. Elizabeth died about 11 years later.

She produced botanical art for which she is known today.

One of my newest favorite artists is Tracy Hall. You can see her watercolors on her blog- she is most famous for her animal portraiture, but is equally adept at capturing birds and plants.

Anyway, it is she that recommended this book on watercolor technique especially in painting flowers. ( And do check out Tracy's blog)

Elizabeth Blackwell was one of the best botanical artists, and her work looks fresh and lovely today.

Elizabeth Twining was born into the wealthy tea merchant family (which still sells excellent teas today) in London in 1805. She was an artist and writer of botanical books, and was also a notable philanthropist. Sometimes I wonder if a love for flowers and a kindness towards people might not be part of one another in a persons character.

Emma Homan Thayer, born in 1842, wrote and illustrated books on the native wild flowers of the western USA.

Jane Webb Loudon was born in 1807 in England. She became an orphan at seventeen, and began writing to support herself. She married landscape gardener and writer John Loudon and assisted him in his horticultural writing. Soon she wrote her own book of Instructions in Gardening for Ladies, which became hugely popular. Her husband later died leaving her with much debt, so she continued writing to support herself and her daughter.

Look at her fine and lovely prints, available for your own home, if you wish.

A small gallery of botanical prints

Loudon Florals I by Jane Loudon

Arranging groups of flowers in bouquet-like arrangements, she used both cultivated and wild flora.

Her paintings are considered the best Victorian botanical prints, by many.

Samuel Curtis, born in 1779, published 'The Beauties of Flora' and is considered the father of of all the botanical and gardening magazines that exist today.

Robert Furber, born in 1674, was a British horticulturalist who was known as the first seed catalog creator. So when you are thoughtfully perusing all those seed catalogs each winter, this is the man to thank. Furber's most notable work was Twelve Months of Flowers, published in 1730.

Clear, realistic drawings of plants became necessary with the development of herbal medicines

Illustration from the Book of Simple Medicines by Mattheaus Platearius, the importance of correctly illustrating medicines, the "simples" of the day, resulted in some very beautiful renderings that have been put together by another artist. 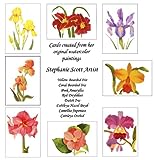 Flower Notecard Collection (8a) by Stephanie Scott from Original Botanical Watercolor Paintings (Set of 8)
I love sending notecards with botanical paintings - they strike just the right tone for any type of expression. this set is particularly nice.
Buy Now

Pierre Joseph Redoute - He painted more than those famous roses...

Redoute went from working for Marie-Antoinette to the patronage of Josephine Bonaparte in the new regime.

His father and grandfather were painters, and he was a botanist as well as an artist, although not formally educated.

A small overview of some of Redoute botanical art.

During the Age of Discovery, as explorers traveled throughout the world for the monarchs of Europe, plant discovery and collection became very important. Botanical illustrations recorded the new plant discoveries and there was a blossoming of publications catering to the desire of wealthy patrons to own paintings of the plants and flowers from the edges of the earth.

Botanical prints have been very popular for wall art. They have a continuation of style that makes them good for grouping, and the look of a single blossom or carefully chosen bouquet along with decorative script writing is attractive to modern eyes.