The Development of the Camera

The camera, though few people are aware of its origin and antiquity, derives directly from the camera obscura. As its Latin name implies, this was first of all a dark vault or room, with a tiny hole in the wall or window-shutter through which the view outside was projected on to the opposite wall, or on to a white screen. Its invention is erroneously ascribed by various writers to Roger Bacon, Alberti, Leonardo da Vinci and Giambattista della Porta, but in fact it was described 250 years before Bacon by the Arabian scholar Hassan ibn Hassan, generally known as Alhazen (A.D. 965-1038). He stated that if the image of the sun during a partial eclipse passes through a small hole on to a plane surface opposite, it will appear crescent-shaped, but if the hole is large, it will take the shape of the hole. It is clear that Alhazen was aware of the significance of the relationship between size of aperture and sharpness of image (which in the photographic camera is regulated by a diaphragm).

For centuries the use of the camera obscura remained confined to the observation of solar eclipses (without harming the eyes by looking directly at the sun) as illustrated in a work of the Dutch physician and mathematician Gemma Frisius in 1545.

From this it was not a big step to the secret observation of what went on in the street; the fascination of seeing Nature in all its colours and in perfect perspective, as if painted on the white screen in the darkened room, led artists from the seventeenth century on to trace these camera obscura images of landscapes and portraits, and fill in the colour. This quick, easy and accurate means of making sketches was first pointed out by the Neapolitan scientist Porta in 1558, though it may have been known to Renaissance artists. (Leonardo da Vinci merely compares the camera with the eye, he does not mention in his notebooks its application to drawing.)

An important improvement in the camera obscura was the insertion of a convex lens in the hole, which permitted it to be made larger, resulting in much brighter and sharper pictures. This advance was due to Girolamo Cardano, a professor of mathematics in Milan, in 1550.

According to the laws of optics, the images received on the paper screen were upside down, and though Porta in a later greatly enlarged edition of his Magiae naturalis, or 'Natural Magic' (1588), revealed his 'carefully guarded secret' of how to make the images upright by means of a mirror, he had been anticipated in the publication by both Ignatio Danti (1573) and by G. B. Benne-detti (1585). Meanwhile another improvement had been introduced in 1568 by Daniel Barbaro -the use of a diaphragm to sharpen the image. Thus at the end of the sixteenth century the camera was a darkened room in a house, fitted with a lens and a diaphragm, and the landscape or portrait was reflected right way up on to the white screen by a mirror. 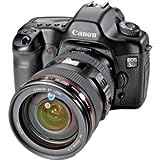 American inventor and manufacturer. He early experimented in the manufacture of dry plates in 1880, produced the first commercial roll-film in 1884, and invented his famous camera, the "Kodak" in 1888.

Of the vast fortune he amassed, he devoted $60 million to educational endowments, especially at Rochester, where was educated.

The first suggestion for a portable camera was made by Friedrich Riesner, who, before 1580, recommended the construction of a light transportable wooden hut for the accurate delineation of topographical views. The German Jesuit scholar Athanasius Kircher illustrates this type, which he saw in use in Germany, in his Ars Magna (1646). It was carried like a sedan chair between poles, and the artist entered the little hut, made of lightweight but strong material, through a trapdoor in the floor.

When making a survey of Upper Austria in 1620, Johann Kepler the astronomer (in his capacity as Imperial Mathematician) used a little black tent, through the top of which projected a tube containing a convex lens, and a mirror to reflect the image down on to the drawing board. A hundred and thirteen years later Abbe Nollet submitted his re-invention of the tent camera to the Academic des Sciences in Paris.

The small portable box camera, which is the immediate parent of the photographic camera, dates from the middle of the seventeenth century. One of Kircher's pupils, Kaspar Schott, mentions in 1657 that a traveller in Spain reported having seen one small enough to be carried under the arm. Schott comments that it is not at all necessary for the camera to be so large that the artist could get inside it; it is quite sufficient to look through an opening in the box, and to prove its practicability Schott had a little camera made consisting of two boxes, one slightly smaller to slide within the other, in order to adjust the focus - here, in other words, was the type of camera used in the early years of photography.

About this time tiny camera obscuras disguised as drinking goblets and books are mentioned as a novelty. In the former, the light-rays entered through a convex lens in the side of the stem of the goblet and were reflected by a small mirror fixed behind the lens on to the surface of the wine (which had to be white so that the image would show). This amusing magic goblet enabled a host unobtrusively to keep an eye on his guests. Probably with the same idea of keeping watch, a German schoolmaster disguised his camera obscura as a book. These were in a way the forerunners of the so-called 'detective' cameras which had a great vogue in the eighteen-nineties.

The reflex camera, nowadays so popular, was first mentioned by the German mathematician Sturm, in 1676. A mirror at 45° to the lens reflected the image right way up on to a piece of oiled paper stretched across the opening in the top of the camera, which was shaded by a hood for improved visibility of the image. Nine years later Johann Zahn, the leading representative of German monastic learning, illustrated several little box cameras, of the ordinary and of the reflex type. They were about nine inches in height and breadth and about two feet long. The oiled paper was replaced by a ground-glass screen (the first reference to the focusing glass). The camera lid had side flaps to shade the image, and to avoid internal reflections the box and lens tube were painted black inside. In size and construction, Zahn's cameras are prototypes of nineteenth-century box and reflex cameras: no further development took place until the middle of the nineteenth century, so we can say that in 1685 the camera was absolutely ready and waiting for photography.

In the eighteenth century the camera obscura was in common use. Count Algarotti stated in his Essay on Painting (1764) that an art academy required no other equipment than Leonardo's Treatise on Painting, casts of the finest Greek statues and a camera obscura. Among the well-known artists who made extensive use of the instrument were Crespi (Spagnolo of Bologna), and Canal-etto and Bellotto, whose admirable rendering of perspective in their town views is always admired. The plates in Dr William Cheselden's famous Osteographia, or the Anatomy of the Bones (1733) were traced in the camera 'with more accuracy and less labour' than if drawn unaided.

For the convenience of travellers the camera was incorporated in sedan chairs and carriages, so that the tourist could make sketches whenever he came to a beauty spot without having to leave his conveyance. For portraiture, table models were made, the table-top being the drawing-board. In striving for increased portability, pocket cameras only six to eight inches long and two or three inches wide were made, and we even hear of one incorporated in the head of a walking-stick.

The ground for the introduction of photography was thus so well prepared that it explains why so many independent attempts were made within so short a period to try to produce pictures without the aid of the artist's pencil.

Thomas Wedgwood was the first to whom this idea occurred, at the turn of the eighteenth century. His father, the famous potter Josiah Wedgwood, had a camera obscura which was used for making views of 'the stately homes of England' to decorate a dinner service for Catherine the Great. Thomas Wedgwood tried to fix the images of this camera by chemical means instead of laboriously tracing over them, but his attempts failed because the chemicals used were not sensitive enough, nor could he find a fixing agent. The first person to succeed in obtaining a permanent view in the camera by chemical means was Nice-phore Niepce (1765-1833) in France in 1826, and the same reasoning which had led Wedgwood and Niepce to photography brought success to the Englishman W. H. Fox Talbot in 1835 and to the Frenchman Louis Daguerre in 1837.

Early in the nineteenth century the room-type camera enjoyed a revival, and watching a busy street scene or a landscape with trees moving in the wind was an unending source of amusement, which may still be enjoyed in at least two surviving camera obscuras, one on the Castle Hill in Edinburgh, and the other on the Downs at Clifton, Bristol.