Do you love dogs? Which is your favorite dog breed? I have been creating dog breed coloring pages for many different dog breeds. I have sorted them according to the groups which have been given by the American Kennel Club - sporting, hound, working, terrier, toy, herding, and non-sporting. Other countries have slightly different categories or ways of classifying the different breeds.

Click on the dog line drawings to download a bigger version of the picture. All the coloring sheets on this page are my own pictures or adaptations of public domain pictures (from wpclipart) or from morguefile so please do not upload them anywhere else on the web. Feel free to link to this page but please do not link directly to the png file on docs.google. 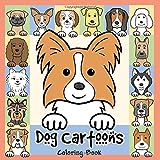 You might also be interested in making some dog crafts. There are lots of cute crafts featured including printable paper models for many different dog breeds.

Sporting dogs, sometimes known as gun dogs, help hunters when they are hunting game birds. Some breeds in this category (such as pointers and setters) specialize in locating the bird and / or preventing its escape, some (such as spaniels) will flush out the bird, while other breeds (such as retrievers) will retrieve the prey after it is shot down. These breeds are generally alert and active, requiring regular exercise.

Hound dogs were originally bred to chase, or hound their quarry. Some hunt by sight (such as greyhounds, afghan hounds, and borzois) and tend to have stamina and speed to enable them to catch their prey. Other hounds (such as beagles, blood hounds, and basset hounds) hunt by scent.

Dogs are very eager to work alongside humans. The working dogs in this category were bred for their strength and courage. Working dogs are used to rescue, guard, pull and haul. They are used in police and military work. Because of their size, it is important to ensure that when these dogs are kept as pets, they are well trained.

Terriers were originally bred to go down holes in the ground and hunt out vermin, such as mice, rats, rabbits, etc. My dog is a tenterfield terrier (recognized by the Australian National Kennel Council) and he loves going into dark holes, like crawling under the blankets in our bed. One of his favorite places to sleep is squeezed under a bed on top of a mattress which is stored there.

Toy dogs were originally bred to be the companion dogs of wealthy people. They were viewed as a status symbol. They did not play any major role in protecting the family or contributing to putting food on the table. They are small dogs which include lap dogs and teacup dogs. The chihuahua is the smallest toy dog.

The breeds in the herding group used to be included in the working dogs group. But since 1983 they have had their own group. They are great herders, able to move other animals, even animals much larger than themselves, where they need to go.

The non-sporting group seems to be a catch-all for dog breeds which do not fit into the other categories. The breeds in this category vary greatly in appearance, size, and personality.

Can you suggest any more dog breed coloring pages?