Maybe you have not heard of Maitre Afewerk Tekle, but very likely you have seen some of his work. With good reason he is called Maitre, meaning master or expert. His work has been displayed all over the world, for decades. He has produced not only paintings, but also statues and stained glass. Have a look at some of his art, and be impressed with the Master.

Maitre Afewerk Tekle passed away on April 10, 2012. Thousands of people attended the funeral at the Holy Trinity Cathedral in Addis Ababa.

The Background of Maitre Afewerk Tekle

Afewerk Tekle was born in 1932 in Ethiopia. He grew up during the war with the Italians. After this had finished, Maitre Afewerk was sent to Europe to study engineering together with others. They were instructed to work hard and return to help their country.

While at university in England, his talent for painting was so obvious that he was persuaded to change his branch of study. First he studied at the Central School of Arts and Crafts in London, and later he became the first African student to enroll at the Slade School of Art. From there it rolled on quickly!

HOME TO AN ETHIOPIAN LOST ICON

Ethiopian Art in the Diaspora

When returning to his homeland he decided to visit the country extensively. He travelled the provinces of Ethiopia, getting inspiration for his paintings. This led up to his first exhibition in Addis Ababa, in 1954. It was a success, and helped him sponsor another trip to Europe, to continue his studies.

For two years he travelled around Europe. Not only did he further his art of painting, but he also learned how to design and construct stained glass windows. At the same time, he took time to study ancient Ethiopian illustrated manuscripts, which are found in Rome, London and Paris. He really made good use of his time.

This window is part of the Holy Trinity Cathedral, Addis Ababa, Ethiopia.

For a painting by the great artist on the same theme, hanging in St. George's Cathedral, Addis Ababa, Ethiopia,please click on this link: Photo by A.Davey>

"Actually, the Afework Tekle painting from the Cathedral of St. George was extremely contraversial when it was first installed and decried as un-Ethiopian. The reasons for this was the fact that the Queen of Sheba was placed below the dias on which King Solomon stands, and he looks like he is making no move to leave the dias to greet her. To many this indicated that the King was her superior which offended the Ethiopian idea of the monarchs being equals. The other even more contraversial element was the fact that the Queen is shown in profile. In traditional Ethiopian iconography, only the evil are shown in profile and the righteous are shown full or three quarter faced .... However the Emperor liked the painting and that ended the matter."

Ethiopian Art (Sam Fogg)
The cover of this book aptly highlight the point mentioned above regarding the Queen of Sheba. The persons (likely saints) are painted with their faces facing front. This leads to some interesting angles while painting, but is explained by the fact that it was only evil people who were painted in profile.
Buy Now

After his time in Europe he returned home with a lot of knowledge. Fortunately his talent was recognized at home, and he was given a great privilege, that of of making murals and mosaics in the Saint George Cathedral. He also worked on a number of sculptures depicting Ethiopian heroes.

In 1958 he designed the stained glass windows in the Africa Hall of the United Nations Economic Commission for Africa in Addis Ababa. The three windows cover an area of 150 square meters, and represent the sorrow of Africa's past, the struggle of the present, and hope for Africa's future. A truly beautiful work.

Art of Ethiopia
Throughout history, Ethiopian art has always been closely linked to the Orthodox church. This book focuses a lot on the crosses and icons that are the most common forms of Ethiopian art.
Buy Now

Ancient Churches of Ethiopia
It is difficult to talk about Ethiopian art without mentioning the churches. Often, this is where you find the ancient art, preserved until our time. Even the churches in themselves are a work of art.
Buy Now

In the 1960s he set out on a journey of different African countries. What he saw led him to take an interest in the subject of black emancipation and independence. This was a time when many African states were fighting and getting independence from the colonial powers. Again, what he saw served as an inspiration for his art.

Coronation of Emperor Haile Selassie I" by MaÃ®tre Afewerk Tekle

Afewerk Tekle is much known for his religious and African art, both in Ethiopia and the rest of the world. In the 1970s he continued producing murals and mosaics in different churches of Ethiopia, as well as other official buildings. Most notable is probably the mural the Last Judgment in the province of Tigray.

He has had exhibitions of his art in Moscow, Washington, New York and Bonn- just to mention a few. His painting Self-Portrait can be seen in Florence, Italy. It was the first painting by an African artist to enter the permanent collection of the Uffizi Gallery.

"The Last Judgement " This painting by The Most Honourable World Laureate MaÃ®tre Artiste Afewerk Tekle (b. 1932) hangs in St. George's Cathedral in Addis Ababa. The piece was painted in 1958. It measures a huge 3 x 2.5 meters. In 1971, the artist painted a larger version of the piece in the Holy Saviour Catholic Cathedral in Tigrai.

Lalibela Churches - Yet to be released

Lalibela: Christian Art of Ethiopia, The Monolithic Churches and Their Treasures
UNESCO has declared Lalibela as a World Heritage Site, and with good reason. The several churches that have been hewn out of the rock are amazing. The treasures and works of art found inside are also fantastic.
Buy Now

Nice display of a lot of his art

Even the artist's home in Addis Ababa is a piece of art. The Villa Alpha, designed by himself, has been open to the public..Many people are very sad of the passing of Maitre Afewerk Tekle. His life has been long and rich, and he has contributed greatly to the fame of Ethiopia.

Here you can check out pictures of Villa Alpha

This painting by The Most Honourable World Laureate MaÃ®tre Artiste Afewerk Tekle (b. 1932) hangs in the National Museum in Addis Ababa, Ethiopia.

The painting's title, "Demera," comes from the bonfire depicted near the center of the image. A bonfire, called the Demera, is one of the central events in the Ethiopian Orthodox festival of Maskal, which commemorates the Finding of the True Cross.

More comments and interpretations of this picture can be found if you click on the photographer's name.

Afewerk Tekle is only one of the many Ethiopian men who are internationally known. There are many others, in a variety of fields. Did you, for example, know that one of New York's great chefs was born in Ethiopia? (A little tip- he's the one in the picture.) Read about him and a few others on the page

While Ethiopia has a basically patriarchal society, it has given birth to a number of strong women. Queens, models, chefs and athletes. All of them Ethiopians, all of them women. Considering that in between whatever path they have taken, they also find time and energy to give birth, their accomplishments are even more amazing. Picture shows Queen Empress Menen. 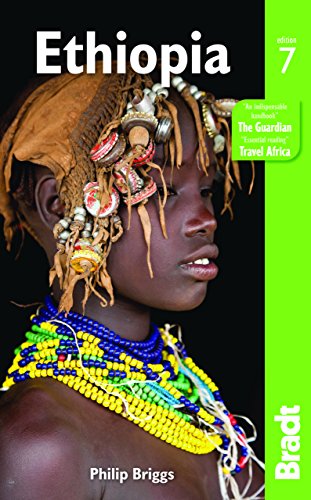 For travelers to Ethiopia, there are a few vaccinations and precautions that are recommended:

- Malaria prophylaxis. Only if you are going outside of Addis, in the lower parts of the country. The northern parts of Ethiopia (including Addis Ababa) are at such a high altitude that malaria is not a problem.

- Traveler's diarrhea is quite common. All travelers should bring along an antibiotic and an anti-diarrhea drug to be started promptly if significant diarrhea occurs.

In general it is good to keep a good hygiene and avoid raw food in any form. When eating out, especially in the country side, stick to food that has been properly heated prior to eating. The local food, injera, is often handled by hand and stored for several days after preparation.

For all the photos of Maitre Afewerk Tekle's art, by A.Davey, alanj46 and o spot, I have got the permission from the photographers. The pictures can be found on Flickr.

After having seen the work of Maitre Afewerk Tekle, what is your impression? Isn't he a wonderful artist?

Ethiopian Art - What Is Your Opinion? - Please leave a comment