Fotor is a photo editing web application that's suitable for people looking for an easy to use and affordable photo editor. It is especially valuable if you do photo editing on different platforms/devices. Fotor sports a Windows 8 interface (but also has a Windows version for 7 and earlier) and allows you to your photos a wide range of looks, to add fancy borders, to create a collage or simply fix some imperfections, Fotor is free to use so long as your browser runs Flash. Fotor's clean interface sports a dual pane toolbar on the left with thumbnails of all the photos (you can upload many at once) for your session on the right and your editing workspace in the middle of the screen. From this basic interface you have access to a full range of free photo editing tools. With Picmonkey starting to charge for certain services, editors like Fotor will probably see more traffic - and we'll also mention several other Fotor-like services that you can explore.

For when you are working offline, Fotor also has companion apps for the iPhone/iPad, the Android, Macintosh, Windows and Windows 8 so you can and use Fotor across many devices. By far it is the best cross-platform photo editing tool.

With the straighten tool, you can adjust the angle of your image. Moving the slider to the right tilts the image to the right and moving the slider to the left tilts the image to the left. Since I first reviewed Fotor, these specific tools have been enhanced and enhanced. I'm finding that Fotor is coming up to speed with the more expensive Adobe Photoshop Elements.

Photo cropping is a basic feature available in any modern editor, but I like how Fotor has enhanced this basic feature. Below Freeform, Original, Square and Golden you will find the following commonly used aspect ratio presets: 2X3 (iPhone), 3X5, 4X3 (DVD), 4X6 (Postcard), 5X7 (L, 2L) 8X10 and 16X19. These presets make it easy to crop your photo when you don't want to hassle with manual adjustments. This allows you to crop your photo in a manner that ensures it will look good in your finished printed product. Not a huge feature for online photos, but all too often folks crop away and then realize their image which looks good on screen, won't print properly in a 5x8 image.

Fotor includes over 50 effects grouped in six sets: Classic, Lomo, Vintage, Cool, B&W and Funky. While the collection includes some great effects, it's actually a stretch to say it has 50 effects as many of the effects are quite similar with just subtle variations. But regardless of how many there are, the effects are quite easy to use and to test out. On the left, each effect’s thumbnail shows a preview of the effect on your image. Once you select an effect, a simple slider allows you to adjust the strength of the effect.

An alternative to Fotor is Picadilo which is a free online photo editor that's easy to use and powerful. You can transform your photos using eyecatching effects, versatile editing tools and a nice range of textures. Some of the best features are the photo mosaic and the ability to use multiple windows - commonly available in only much more expensive photo editors. You can let your creativity run free by loading more than one photo and working on them side by side. You can even select and copy regions from one photograph to another photograph.

Fotor has all the basic enhancements such as Text, Frames and Graphics. Each of these are more about additions to the image - not editing the image itself. As you can see above, you can easily add a frame (from filmstrip to this professional style frame) and a wide range of graphic clip-art. These features are one or two click features so you can easily enhance your images with everything, ranging from a serious or a fun look.

Fotor's Add Text feature allows you to pull fonts directly from your computer as well as from our many online fonts so you can add text directly on your photos. However, the ability to use fonts you have already downloaded and like is a unique feature that is typically only available with much more expensive photo tools. It also includes options such as bold/italic, indentation, and the ability to move the text forward or backward behind other texts and shapes.

Photo cards are a cool addition to Fotor. While the collection if templates will not compete with professional services like Shutterfly.com or Treat.com, there are more than a dozen easily editable templates to get you some basic holiday cards for your photos. 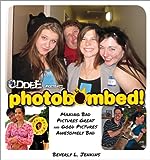 Photo Collage - With Templates or Freeform

Another alternative to Fotor is PicMonkey which is the creation of several former Picnik engineers and is another great photo editor. While very similar to Picnik and Ribbet in functionality, Ribbit is even closer in screen layout to the original Picnik. Just as with Picnik and Ribbet, in the left-hand column you see all of your photo editing options. The range of options includes everything from basics likes cropping and rotating to a full array of air-brushing edits. Right now both Ribbet and Picmonkey have only free versions - though both are planning on premium versions. I suspect that is when we will start to see bigger differences - which site offers what for free and what for a charge and at what price.

I love editing photos, but when you have the photos say from a special event, especially a once-in-a-lifetime event such as a reunion or a graduation you might want a professional touch. Tucia can add a person into a family portrait or remove an unwanted stranger from your photo. The photo editors at Tucia can digitally open up closed eyes, fix hair and easily change backgrounds. They can also offer glamorize and digital cosmetic enhancement options - get a tan, clear acne or remove braces. Essentially any photo job that is too big or too important - I give to Tucia's team of editors.

Save on Photo Printing and Gifts

I save hundreds of dollars a year by careful use of photo coupons. eBay is a great source for these deals. Shutterfly is my preferred source for photo gifts - but I never buy without a coupon (or two or three as they allow stacking!)

Photoshop Express is a free web based version of Photoshop - the best photo editing software on the marketing. Photoshop has been so so successful that many people use Photoshop as a generic term for photo editing..

This completely free version is obviously less featured than the full version of the expensive Photoshop software - you certainly don't get all the bells and whistles. That said you won't miss many of the exotic features as this web version is targeted at mainstream consumers, not photo editing professionals. Photoshop Express has fewer silly features like bug eyes and goo faces - but if you want to get into changing colors of just one object, removing objects and other advanced editing techniques this is a great intro to the Photoshop world.