Gargoyles and Their Meanings

For many years gargoyles have been a fascinating topic, largely because, as usual, Hollywood taking them and adapting them to generate a story; usually one of horror.

But the reality is gargoyles have little meaning and resemblance to the Hollywood version, and were in fact used in a very practical manner centuries ago.

The actual reason and purpose of gargoyles was to be used a drain on a roof to help stop the flow of water dripping down the walls. The decorative part was presumably for similar reasons be may use statuary in a garden.

There is a secondary bit of building art which most people consider to be gargoyles, but are actually identified as grotesques. What's the difference? The usage. One is simply a piece of art, the other, as mentioned, is for the use of managing drainage.

So even if both were similar in appearance, the gargoyle would only be accurately identified by whether or not it was a decorative piece for the purpose of drainage. If it wasn't used for drainage, the proper term for it would be a grotesque.

There is a wide variety of gargoyle images because of the definition used above. It literally could be designed as anything as long as it was used for drainage.

The reason we normally think of gargoyles as looking a certain way, is probably because of the ubiquitous number of photos we've seen of Notre Dame in Paris, which has a variety of gargoyles with a somewhat horrifying look.

As for the picture on the right, unless there's an unknown and unseen drainage area around it, would be officially considered a grotesque.

A chimera is a creature with more than one type of animal in its makeup, which could also be a human. An example most of us know would be the mythological centaur.

Again, because of the misunderstanding of what a gargoyle is, many confuse the chimera as being a gargoyle, when it could be a, having no other than a decorative purpose.

So a chimera designed out from or on top of a building, again, is identified by its use, and nothing else.

With that in mind, this is why so many gargoyles are so strange looking, as they've been largely embraced by artists, in general, to have an appearance of a chimera. That is why they can be a mixture of man, dog, snake, eagle, dragon, a combination of them, or any number of other artistic interpretations.

The origin of gargoyles in the Catholic church is cloudy, with no way of knowing for sure where and when they were introduced.

So a lot of unproven stories have emerged which are impossible to sort through as to whether or not they're based in reality.

One part of the story that seems to have some veracity is they were placed on churches in order to give those attending a reminder they were guarded from evil spirits in the supposed safety of the building. Even today there are those who superstitiously adhere to this myth.

Another idea is the opposite, in that they were a warning to people viewing them of the evils of the world outside the church. and a warning to hold to the teachings of Catholicism to remain safe.

Of course it's practical purpose was to continue to operate as a drainage system, even if the stories above have some truth to them.

Gargoyle or Grotesque - Does it Matter?

In reality, it really isn't that important as to properly identifying whether it's a gargoyle or a grotesque, as the appearance has become etched in the minds of people as to how they look.

For true aficionados though, they do take exception to knowing what the difference is, and if you're ever in a conversation with them, they'll let you know it.

But for the rest of us, let's face it, we're not going to invite a neighbor or friend over when we buy a statue or piece of art that looks like what most would consider a gargoyle, and say to them: come over and see my new grotesque. It's not going to compute, and they'll give you a weired look for sure. 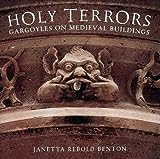 While we now have the story as to the real meaning of a gargoyle, the bottom line today is they're viewed by visitors to places that have them on buildings as a work of art.

Not too many really care about the why of them, and assume they are all there for decorative reasons. With that in mind, here are several gargoyles and/or grotesques to look at.

To show that what a gargoyle looks like has nothing to do with the subject matter, here's one of a fireman on a fire station in Philadelphia. The building itself was scheduled for demolition several years ago, and it's unclear whether or not this particular gargoyle survived. Pretty cool looking though.

This particular image of a gargoyle is probably what the vast majority of people think of when contemplating the art form. This is one of the many on Notre Dame. You can see the chimera-like likeness portrayed by the stature.

Here is another cool gargoyle, this one stretching itself out from Prague Castle. It is that of a dragon, a not uncommon theme in medieval times. I like the way it appears to be launching off from the castle into flight.

This is the Leonine Gargoyle, located at Sagrada Familia Cathedral, Barcelona, Spain. The strange looking chimera appears to have the face of a man mingled with the traits of a lion. Sometimes it's hard to totally identify what exactly is attempting to be portrayed by the artist, but this one is definitely unique.

Here is another depiction of what I would consider a more traditional look and feel of a gargoyle; this one located in Santa Cruz, California.

Technically a grotesque, nonetheless, as far as art goes, it embraces the fearsome continence of an imagined gargoyle of long ago. Pretty awesome and gruesome looking.

Whether created for the purpose of draining water or to scare off evil spirits, or scare the people thinking they're in danger of evil spirits, gargoyles have mostly become a piece of art for the majority of people today, with the secondary purpose (for a few) of being a talisman against evil, or to warn about evil.

It's humorous to think today that the ancestral drainage works of art and mythical beings have now become a series of guttering and downspouts on homes and buildings.