The icon of Nativity

Welcome to my web page!

Christmas is coming soon. Humanity - or at least a large part of it- has already started preparations for its celebration. Gifts, ornaments, decoration, organising dinners or parties and family reunions. We are so busy getting ready for the "Perfect Christmas" that we forget what Christmas is, what and why we celebrate and how we should celebrate. Drowned in plastic ornaments and artificial lights we forget THE LIGHT. We forget the humble, noiseless arrival of God to earth and its meaning.

In this web page I would like to introduce you to the painting of Christ's birth in Orthodox Iconography hoping that, in my way, I will contribute to reminding and being reminded of what took place in that dark night, in the little village of Bethlehem, when earth and sky bent down to bow to the King of Kings.

The following explanations and analysis of the icons are only a tiny sample of this magnificent religious Art which instructs people to the deep spiritual truths of Christianity.

I wish to each and everyone of you to live Christ's Birth in your heart and radiate it to your surroundings!

Initially the purpose of icons was to instruct illiterate people about the Scriptures. Scenes of Christ's life and images from the Old Testament as well as saints and martyrs were painted on the walls or on portable icons.

Icons form part of the ritual of Christian Orthodox church: body, eyes, ears and nose, together with heart and spirit participate in it. Paintings, chanting and insence pacify the mind in order to prepare it for the divine liturgy. In the candle- lit interior of the temple the figures depicted on the icons become friendly and benevolent presences radiating spiritual light.

Meaning of the word icon

Reading the icon of Nativity

The Icon of Nativity holds a principal place in Orthodox Iconography. It contains historical and symbolic elements which illustrate the Mystery of God's Encarnation.

The Birth takes place in a dark cave, symbol of the prechristian, paganistic world and of the world of Death that Christ illuminated with his Resurrection. The baby Christ , placed in the middle of the painting, is covered with a piece of clothe which evokes the clothe covering the dead body of Lazarus and implies His death.

In the background, the summit of the triangle shaped mountain is a symbol of the ascendence to the Heavenly Jerusalem.

The figure of the Virgin Mary is predominant in the painting as was her role in God's plan of salvation. The artist paints her in the centre of the icon , and her proportions are different from the rest of its elements.

She is placed in the heart of the hill since she is "the mountain through which Christ has arisen". She is depicted in close relationship with Him and at the same time at a distance, due to the knowledge of His Divinity. She looks serious and pensive, as if she had a premonition of the sword that would penetrate her heart.

Apart from her and the Divine Child, only two animals are in the cave, a referrence to Isaias prophecy: "Only the animals recognised me and not my people".

Joseph sits far from the cave. In this way Byzantine Art implies the fundamental idea of the immaculate conception.

He looks pensive as if he were still tortured by suspicions about Mary's integrity. Very often there is a sheperd talking to him, a symbol of Satan provoking these thoughts.

The Angels stand up, noble and magnificent, dressed in their ancient garments, hands covered, in postures and gestures that demonstrate respect to the Child.

They are not painted inside the cave but they stand outside it so that the main theme of the icon is not diminished.

The angelic powers glorify the Lord. Some of them announce the great event to the shepherds.

The first humans to whom the angels communicated the news of Christ's birth were the shepherds.

Simple and pure- hearted people, they were able to conceive from the very beginning the great importance of this event.

The 'Kings" are actually three wise and intellectual men, whose knowledge and wealth did not impede them to follow the Star of their innermost impulse.

They were led by it to the humble place were Christ was born to bow to Him, offer their gifts and celebrate with the sheperds.

The Kings' ages are different, as Christ's Light illuminates people of all ages.

The particularity of the orthodox representation of time and space is that although the events that surround the Birth of Christ took place in different moments and places, they are illustrated as if happening at the same time.

This is a very important point, as it represents the transcending of the three-dimensional natural space and time. The place where the events are taking place is a continuous Here, a perpetual, glorifying Present. 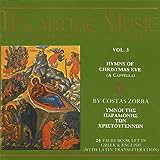 Come and see faithful, where Christ was born

Icon as Communion: The Ideals and Compositional Principles of Icon Painting
Buy Now 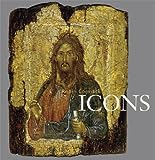 How does the greek orthodox approach of religious painting appeal to you?