There's something fishy about this craft

Valentine's Day often seems like a holiday involving way too much candy, which isn't good for our kids. This Valentine's Day craft uses Goldfish Crackers which kids love and is a nice healthy snack. Plus the craft is super cute and easy enough for kids to help with.

Or just surprise your child by popping one in her lunchbag for a happy snack.

There are several variations to customize this craft for your kids, so they could even make different versions for each kid in their class.

This is a great craft for making in the classroom.

It only requires a few items you likely already have in the class, and it's easy enough for more kids to make.

It's also fun thing for the kids to exchange for Valentine's Day.

Get Craft Items Together

Draw a Fishbowl on Your Piece of Paper

Draw a fishbowl shape onto a piece of the cardstock.

Try to make it close to the width of your plastic baggie and just about as tall. For the bags I used, that was about 5" tall and wide.

Get Plastic Bags for this Craft

Reclosable Plastic Bag 7"x8" 2mil Zip Lock pk/100
This Ziploc bag is about 7 inches by 8 inches and there are 100 of them in a pack. They're perfect for this craft.
Buy Now

Cut the Fish Bowl Out

Carefully cut the fish bowl out of the paper along the lines that you drew.

Draw a Water Mark on the Paper

With a blue marker draw a high water mark near the top of the fish bowl. You may want to add a few bubbles in the water as well.

Draw Some Gravel in the Fish Bowl

Draw some gravel into the bottom of the fish bowl.

Use whatever colors you want. I used pink and brown markers and just made some small squiggles to look like rocks in the bottom of the bowl.

Gravel Drawn in the Fish Bowl

Color in the Bowl

Color in the fish bowl with blue marker below the line you drew to be a waterline.

Try to make it look nice and make sure you don't fill in the bubbles or color over the gravel.

Color in the Fish Bowl

Or Print Out a Fishbowl

If you don't want to hand draw a fishbowl you can create one on the computer.

I made one and posted it below if you'd rather just print one out. Right click on the image, then save it to your computer so you can print it out whenever you're ready.

Cut Another Piece Out of the Paper

Cut about a 3"x4" rectangle out of the cardstock.

You could also do a unique shape to match the fish tank, such as cutting out a fish or a fishnet or a tag-shape.

Cut Out Pieces of Paper

Write on the Paper

There are several cute phrases you can put on these. Use the one that works for you or make up your own.

Write your chosen phrase on the tag.

Place the Fish Bowl in the Plastic Bag

Put the fish bowl in the plastic baggie

(you don't want the water splashing out of the fish bowl, lol).

Place Fish in the Bag

Add some Goldfish Crackers or Swedish Fish to the plastic baggie.

Depending on the size of your fishbowl, add about 10 or so fish. Just a nice little school of fish.

Fish in the Bag

Get Goldfish Crackers for this Craft

There are lots of different flavors of Goldfish Crackers, including cheese, pizza, pretzels, and rainbow colors. 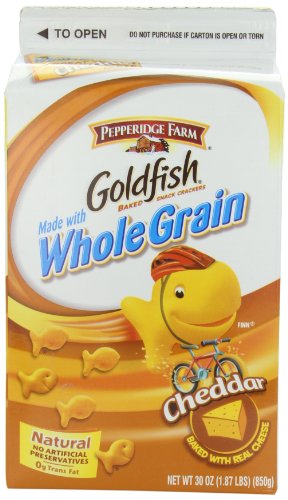 If you'd rather get Swedish Fish, you can get some here. 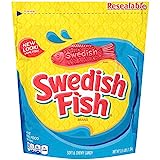 Add Tag and Seal the Bag

How you attach the tag depends on what plastic baggie you're using. The ones I got didn't have zipper seals, they came with twist ties, so I just punched a hole in the corner and added the tag just before I twisted shut the twist tie. If you're using zipper baggies, you'll likely want to staple the tag on the edge.

What do you think of this craft? Going to make some for Goldfish Fishbowls for Valentine's Day?