Lynne loves to do crafts with her children and grandchildren. (almost as much as she loves them and loves Jesus!)

Origami at its finest!

German Stars (also known as Moravian Stars) are beautiful handmade Christmas Ornaments. They can be a little tricky; however, with just a bit of practice, you'll find they come together rather quickly. It's hard to believe that a mere four strips of paper can become the three dimensional ornament pictured on the left.

I learned to make these delightful ornaments about 15 years ago. I taught my daughters and for several years we made them for Christmas gifts for friends, family and our churches (my husband is a pastor, so we had several churches at one time and moved every three or four years). They made for a nice family gift.

Now, scroll down to find out exactly how to make a German Star

Supply List - Here's what you'll need to get started

Step One - Create the First BasketWeave

When you make your first few German Stars, it's best to use 2 strips of 2 different colors. However, once you're more experienced, you can use any colors you like!

Believe it or not after you get the hang of these ornaments, this step will be the one that is most difficult to remember. All the rest you repeat 8 times, but this one, you only do once to get it all started.

Once you get this step, you'll have it!

You do it 8 times for every star you make.

But this step and the next, while they are a little trickier to accomplish, repeat many times. So, just keep trying!

You can do it!

Using the SAME tail, fold it down ON TOP of itself creating a double triangle. The tail will be parallel to the strip on the BOTTOM of the star. It's best to have a very small gap between this fold and the last

Using the SAME tail again, fold it in half ON TOP of itself to form a right triangle. (This is where that small gap comes in handy).

Last, pick up the square and gently fold back your triangle (DON'T CREASE IT BACK, JUST GET IT OUT OF THE WAY FOR A MOMENT). Slide the tail you've bee 1ce8e n working with UNDER the top basket weave of the opposite color. You may need to fold the very end of your tail into a bit of a point in order to get it through smoothly.

Now rotate your star (either way) and repeat these last four directions until you have four points.

After you have four points on this side, turn your star over and repeat the process on the other side. And now you're 1/2 way done!

This is one of the toughest steps, but it's the one that really counts.

Like the last step, you'll repeat this one eight times.

The trick to each one is to make sure the TOP of your tail when you start the step is still on the top when you complete the step. You might want to mark the tops of the four tails on each side (the tail on the right of each set will need to be marked) until you get the hang of this step. If you twist the tail upside down, you'll get a mangled star point.

These directions are for a right handed person, you may have to change all the references to "right" to be "left" and vice versa if it's difficult for you as a left handed person

Holding your star in your left hand, grab the BOTTOM RIGHT tail with your right hand.

Gently pull back the SIDE RIGHT tail (you don't want to fold it, you just want to get it out of the way), then gently bring the BOTTOM RIGHT tail under itself. DO NOT FOLD IT OR CREASE IT. Make it look like a little funnel

Making sure the original TOP of the tail is still on TOP, slide that BOTTOM RIGHT tail UNDER the tail that you've been holding back. Be sure there is no twist in your bottom right tail. It should look something like a shirt collar.

Finally, continue to push that BOTTOM RIGHT tail under the SIDE RIGHT tail until it comes out the LEFT SIDE star point. You may allow the right side tail to fall back over your 3D point.

Turn the star clockwise so the tail covering your 3D point is now the BOTTOM RIGHT tail. And you will repeat the previous four steps until you have four Three dimensional points on the first side of your star.

When you create the fourth 3-D point, you won't have a tail on the right to hold out of the way. The tail from your last star point goes UNDER your first star point.

Finally, just flip the star over and do exactly the same thing on the other side

Do you make ornaments for your tree or for gifts?

Finally, cut off all of the tails from your ornament.

Dip the star in heated paraffin wax (be sure not to allow children to do this unsupervised. Paraffin can be very dangerous because it will stick to your skin and cause burns)

Sprinkle the star with glitter while the paraffin is still wet.

Hang over or lay on a paper towel or waxed paper to dry (paraffin will leak out, so be sure to protect your work area)

One more fun ornament to make

I love the diamond dust glitter! 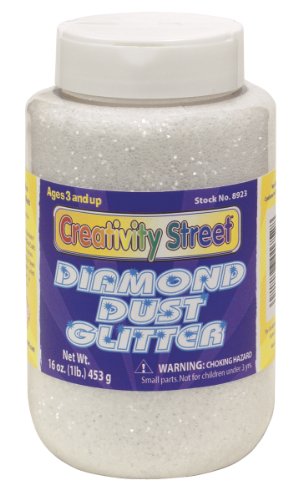 This is my favorite kind of glitter for the stars. It really makes them shimmer.

Tell me about your favorite handmade ornament - OR just leave a note!