How to Knit on a Loom for Beginners

I love to share bible stories online to spread the word of God.

Thanks to the loom, anyone can knit. Loom knitting is fun and fast! It is perfect for children or adults that aren't able to knit with traditional needles. That is why I got started with loom knitting, but knitters experienced with needles often use looms because it's faster. Regardless of your reason for wanting to learn to loom knit, these basic steps will get beginners started knitting today.

The First Step to Knitting on a Loom

Every loom knitting pattern begins by casting on to the loom. Simply put, this means wrapping the yarn onto the loom. The ewrap is one of the most basic cast ons (there are several). To ewrap a loom:

1. Secure the end of the yarn to the anchor peg. This is typically a peg on the side of the loom that is perpendicular to the other pegs. A slipknot is a good way to secure the yarn.

2. Beginning with the peg directly above the anchor peg wrap the yarn toward the inside of the loom, then outward around the peg and back inward. The circle formed around the peg looks like a cursive "e," which is where the ewrap gets its name. Continue wrapping around the loom until all the pegs are wrapped. (I wrap in a clockwise direction, but it can be done counter-clockwise also.)

The photo above shows a loom ewrapped using two yarns as one. This is commonly done in loom knitting to make the finished knit heavier and thicker.

Second Step of How to Knit on a Loom

There are many different ways to knit off, but I will step you through the instructions for the basic "knit" stitch on a loom.

1. Push all the loops down to the bottom of the pegs.

2. Draw the working yarn across the front of the first peg you wrapped.

3. Knit off by using a loom knitting hook to pull the loop over the working yarn and off the peg. The working yarn will now be on the peg. Working around the loom, continue drawing the yarn across the front of the peg and knitting off.

4. As you knit off, knit will begin to drop from the center of the loom. Continue knitting off until it has reached the desired length.

Third Step of How to Knit on a Loom

The final step in loom knitting is to remove the knit from the loom, this is called "casting off." Below are some common methods to "cast off" from a knitting loom.

Cut a long tail from the working yarn. The length necessary will depend on the size of the finished knit, but 1-2 feet is generally plenty long.

* Using a crochet hook, crochet through each loop as you remove it from the loom. Chain 1 between each loop.

* Using a sewing needle, and sew up through each loop as you remove it from the loom.

* Using a crochet hook, feed each loop through the next loop as you remove the knit from the loom.

For the Love of Looms - Knitting Loom Photos

This video explains the how to knit on a loom using one of the most basic loom stitches, the e wrap. It includes the cast on, knitting, and casting off.

How to Ewrap on a Knitting Loom

Knitting looms come in many shapes and sizes. They are often made of wood, metal, or plastic. The ones I frequently use are Knifty Knitter brand looms because they are made of light-weight plastic and are easy to carry around. They are also less expensive than the traditional wooden knitting looms. 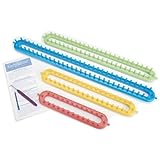 How to Knit Without Wrapping a Loom

Comments on Loom Knitting for Beginners? - Leave them here!