Making a Fairy House from Natural Materials and Plastic Bottle

Build your own fairy garden

You don't have to be a kid to love fairies (and to play with them). I have been thinking about making a fairy garden for some time now. I already had a ton of fairy houses when I was a kid (I admit they weren't all that nice looking) and the idea to have it again was getting stronger day by day. And so I finally decided to take that step and to build my first fairy house.

I decided to take it slow and simple, something that would be easy to make and would look great so I though about using a plastic bottle as a base for my house and to use natural materials to finish it up. As I know many of you might be thinking of making your own fairy garden and are too looking for a simple project to start off your magical journey I decided to post a tutorial on how I made mine (I am really happy about how it turned out).

I can't wait to start with my next house, be sure to be there when it happens!

All photos in this article are taken by me unless stated otherwise.

Let the Fairy House Making Begin! - Making the base

When you get your bottle be sure to first give it a proper cleaning and when it dries use a permanent marker to draw in the details (windows, doors and decide on the height of your house - be sure to add some length/height to that as a part of the house will be underground).

I cut out the doors but wanted to keep the windows. I used some duct tape to secure them for them to stay clean when I painted the bottle. As you probably assumed, when you are done protecting the windows paint the whole house with a background color. I used green but brown would work the same (well you could use any color you want honestly).

As you see on the second photo I also colored the door as I though I would use it (to have it half open in the end) but I decided not to use them in the end (but you could).

As this tool is really inexpensive it's a must for very crafter.

I was without a glue gun for a long time, I always though I don't need it but now I can't imagine my crafting life without it. Just be sure to keep a good stack of glue gun sticks as there's nothing more frustrating than running out in the middle of a craft project.

All you need to do to get the materials for your house is to take (a long) walk in the nature. I am lucky to live right next to a forest and a river so getting natural materials for all kinds of crafts is really easy.

I collected a few fir tree cones (although I think pine cones would look even better), bark from various trees (well dead branches technically), small pebbles, twigs, half of a walnut shell and snail house (make sure it is empty). Options are limitless.

Plug in your glue gun and prepare for things to get messy! I started with shingles. I cut the fir tree cones apart and started to glue them on the house. It took some time and I did manage to burn myself a few times. Glue gun does a great job with this (I tried super glue but it wasn't effective).

I continued with the walls. I broke the bark to small square like pieces and started to glue them (with glue gun) to the base. It felt like making a mosaic. I suggest you try if the piece fits before you apply the glue.

I used small twigs to add some details to windows (see photo 3 above).

Last but not least I started gluing the small pebbles around the doors and windows. This was the most nerve wrecking (there was a lot of glue on my fingers in the end). I combined glue gun and supper glue as some rocks were not cooperating with the glue gun.

I made the chimney with pebbles and topped it up with a walnut shell and a snail house.

My first Fairy House - With it's inhabitant

Fairy in the house

Do you like the fairy that lives in my little project? Her name is Feya and she's a part of Schleich's Bayala series and originally she comes with a horse (which she can mount and unmount).

You can buy fairy houses and just place them in your garden if you don't feel like making one by yourself or don't have the materials needed near by. I selected 4 that I like the most. 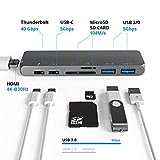 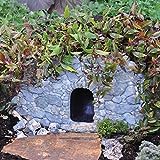 My led lights finally arrived! I ordered a 5 pack of 5 different colors and orange looks magical. I was hoping I would be able to take a decent picture when it would be darker but my camera isn't all that good at it.

These are the lights I bought!

Comments - Do you like this fairy house? Will you be making your fairy garden?