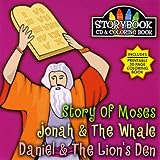 The story of Moses is recognized and known by people around the world, as the breaking of the iron grip of Egypt upon the children of Israel by God through Moses has captured the imagination of all those wishing to break the bondage imposed upon them by others.

Even more fascinating is the means that was taken to bring Moses to the place of being used in such a manner. He was among the leaders of Egypt, a prince in the realm when he defended a fellow Hebrew which resulted in the death of an Egyptian. Moses fled Egypt to become a shepherd of sheep before being sent by God to be a shepherd of His people. His first assignment was to go tell Pharaoh that God wanted His people to be allowed to worship Him for several days.

Pharaoh's response to that demand and request resulted in the battle between God and Pharaoh, of which we all know the outcome. That has to this day made Moses a household name for Christians and Jews alike.

That said, there are a number of online printable coloring pages available to use as tools to teach children all about the story of Moses, with just about every major part of the story offered in illustrative form.

In this article we'll look at several of them that will be a great help in reinforcing and/or telling the story of Moses, God, and the children of Israel and their delivery from being slaves in Egypt.

I guess this first title should have said Moses is holding only have the the 10 commandments, as he only has one of the tablets in his hand. Oh well....

This coloring page of Moses was included because represents close to the most simple and easy of designs to color in. Consequently, most children should have at minimum moderate success when tackling this fairly easy project.

As for the teaching side of it, which is one of the strengths of Bible printables, a child will quickly ask who this guy is and what he is doing. That of course opens the door to give a brief explanation of the story of the Exodus and the part Moses played in it.

It also offers an opportunity to explain what it is that Moses is holding in his hand.

Coloring Page of Moses as a Baby

Children easily and readily identify with other children and babies, so when showing them these images of Moses as a baby, they'll quickly gravitate towards the image and open their hearts to what it's all about.

For those that may not know, Moses was hidden so he wouldn't be killed among other Hebrew male children. The little girl standing on the shore and about to push the basket into the river is his older sister Miriam.

Below that is baby Moses afloat and being committed to the hands of God as to his fate. Eventually Pharoah's daughter took in Moses and he was raised in the palace, which was why he was so prominent at the time he had to flee Egypt.

Moses at the Burning Bush

This is a wonderful depiction of the time when God first made contact with Moses concerning his call to go set His people free in Egypt.

Moses was going about his business when he saw a burning bush, which when he approached it to see what was going on, he was addressed by God, who told him to take off his shoes because he was standing on holy ground. That's what you see to the right of Moses' hand on the ground.

Since it's a tree, and the flames are drawn in a very general way, children will probably have to have it explained to them that it is a bush on fire. The fascinating thing about it is while it was on fire, it wasn't burned or consumed in any way.

Protective Blood on Doors of Jews

God commanded Moses to tell the Israelites to place blood around the doorways to the homes as a sign of protection when the death angel came to strike the first-born of the Egyptians - both their children and livestock.

The purpose was to teach them that only by blood could they be protected, a type of the blood of the Messiah Jesus Christ centuries later.

This was the final plague on Egypt before Pharaoh temporarily decided to let the children of Israel go.

Printable of Moses and Children of Israel Crossing Red Sea

Of all the Bible, outside of the crucifixion and resurrection of Jesus, the crossing of the Red Sea by Moses and the children of Israel may be the most recognizable story from the Bible records that are known.

Children love this type of drama, and the visual of the sea parting captures their imaginations in a big way. It provides all sorts of opportunities to describe what is happening, the power of God, and where the people are going.

It wasn't too long after this that Pharaoh's armies attempted to cross the river via the way made by God, and when they were in the river the power of God holding back the waters was let go and it came crashing down upon the Egyptian army.

The ten commandments have been an important part of the foundation of law in the West, and it goes all the way back to God's given of them to Moses when he went up to the mount to receive them.

This printable is a great depiction of that historical fact, with a fantastic lookig Moses holding the tablets with the commandments etched in them by the very finger of God Himself. Children would be amazed at the telling of this story.

Printable Coloring Pages of Moses, the Exodus, and the 10 Commandments

With the exception of the first Moses printable which was included in order for young children to have an easy option to draw, the rest of the coloring pages are set in the article in the order that they actually happened.

I did that for those that may want to use them as tools to tell the general story of the Exodus from Egypt by the children of Israel under the leadership of Moses. Obviously a lot of the story would have to be filled in, but the major portions of it are included, although the plagues would have to be explained a little right before the introduction of the putting on of the blood on the doorways. That was part of the last plague, but it is the end of that part of the story.

Moses is one of the important men that have ever lived, and these printables are a fantastic way to introduce him to children and the story that is part of the heritage of Christians and Jews alike.