While packing for our trip to Seoul my girlfriend asked, "Should we bring the camera?" I froze. She wasn't talking about the usual camera I carry everywhere. She was talking about our baby: the Nikon D5300 Digital SLR Camera. It was my early Christmas present to her and the first time I spent this much money on a gift.

Seoul is one of the largest cities in the world. It's the capital of South Korea--the middle child of the Far East. We have never been there together but decided to go. The flight was less than two hours from Osaka so a quick three-day getaway would be easy.

Most Japanese think of shopping or great food when they go to Seoul. This reputation is well-deserved. Still, there was plenty of time for both later on so we went to Gyeongbokgung Palace the morning after we landed.

Gyeongbokgung Palace is one of the "Five Grand Palaces" of Korea built during the Joseon Dynasty and its convenient location in Seoul makes it a popular tourist attraction.

In Seoul at the Gyeongbokgung Palace

The morning was clear and sunny but very cold. At first, my Nikon D5300 digital camera felt heavy around my neck. Also, I was worried more about keeping it safe than enjoying the scenery.

All this changed as soon as I took my first few pictures. The image was flawless in the bright winter morning. A few more pictures later I realized that what a bargain this camera was.

Gyeongbokgung Palace is beautiful and with my Nikon D5300 digital camera I was ready to show everyone I knew with each picture I took. Before I knew it, I heard an announcement that the ceremony was about to begin: the changing of the royal guard. 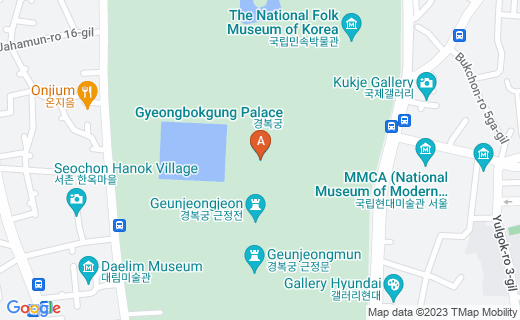 Changing of the royal guard

The changing of the royal guard at Gyeongbokgung Palace is held at the main gate. The ceremony began in 1996 as a reenactment of the original held in the 15th century. It is performed on the hour, every hour from 10am to 3pm everyday of the year, except Tuesdays.

It is a parade that lasts about twenty minutes. The guards wear traditional costumes and hold traditional weapons such as spears and bows and arrows. The banners and costumes are colorful.

The music sounds like something out of "The Last Emperor" and it ends with a beating of a loud drum. The drum seems to shake the ground and none of the tourists see it coming.

The rest of my trip to Seoul was just as exciting and fun. It included Myeongdong for shopping and upscale Gangnam for raw crab. Still, in the end, Gyeongbokgung Palace is where my Nikon D5300 digital camera proved itself.

I can't wait to take it with me on my next festival!