Anna is a lifelong crafter and crochet instructor who enjoys trying new techniques, learning new skills, and sharing them with others.

Every year, we make new decorations for our Christmas tree, preferably using new materials or trying a new craft in the process.

For 2012, I went with materials I've not used before; shaped plastic canvas and metallic yarn, and combined them with more familiar techniques. I hope these photos inspire you to give it a try, too!

Supplies to start with.

First things first! Here are the supplies needed to make these ornaments.

For the star shapes, I didn't plan too far ahead with what I wanted to do, but rather used the shapes themselves to inspire the design.

To begin, I used straight stitches in gold to fill in five diamond shapes.

Remember to anchor your cord ends under your stitches at the back, rather than using knots.

Adding the Next Colour - Building up

The five gold diamonds were then framed in red, leaving the edges for joining.

Before filling in the empty spaces, set this aside and begin work on the back piece.

Preparing the Back - For a tidy finish

Since we don't want to see the ugly back side of the stitched pieces, backing pieces need to be made.

For this ornament, I chose to use red yarn and a leaf stitch to cover the entire back.

Filling in the Front - Finishing the ornament

Now it's time to return to your front piece. Using green, fill in the empty spaces in between the diamond shapes with straight stitches. Do not finish off the end, as you will continue stitching around the edge next.

Here's a back view. As I worked up and down the "spokes", I hid any lengths of cord under my stitches.

Joining Front and Back

Hold front and back pieces together and begin joining them at a stitch near one point. For this ornament, I used a simple whip stitch to join.

Work your joining stitch down one point, the most of the way up the next, stopping just short of the point. Now it's time to add the hanging loop.

Make a simple loop about 2-3 inches long. Leave a couple of inches of loose ends, so there's no danger of the knot coming undon

Slide the loop into place at the point, making sure the knot is not too close to the point, as it will interfere with the stitching. Also make sure the ends are straight and flat inside the ornament, so that there are no unwanted lumps and bumps.

Stitch the loop into place - Anchoring the loop solidly

Continue whip stitching the edge, making sure to work point stitches through the loop, as picture above. The knot of the loop will be under the point stitches. This ensures that the loop cannot be accidentally pulled lose.

Continue whip stitching around all edges.

On reaching the last stitch, anchor your cord end by passing your needle between the two layers, then pulling it out the back piece. It may take a bit of wrestling to get it through - pliers may even be handy to pull the needle out again! If you have any concern that the tail end isn't anchored strongly enough, pass it through again in another direction, inserting through the same opening the cord exited from.

Here's a back view of the finished ornament.

Here's another version using the star shape. Again, I didn't do a lot of pre-planning for the design, and just used the shape of the plastic canvase. This variant, however, left me with an open space that needed filling.

A back view of the stitches.

Blue, Green and Gold, back piece

I wasn't really happy with how much of the plastic canvas was visible in the back panel of the first ornament, so when choosing the yarn for the second star shaped ornament, I chose a bulkier yarn and worked straight stitches at an angle. I then went over it again to cover up the "spokes" in between.

The inside of the back piece, showing how the ends are anchored in the stitches.

The pieces and hanging loop were assembled the same way as the green, red and gold ornament, except that the edging was done in buttonhole stitch (also called blanket stitch).

At this point, it's finished except for the empty space in the middle.

A back view of the Blue, Green and Gold star ornament

To fill the empty space in the middle, I used a gold, adhesive backed gem that I found among some scrapbooking supplies. The adhesive backing can't hold to the cord, so a bit of gold glitter glue was used to keep it in place, then left to dry overnight.

Do you make your own ornaments?

For the square pieces of plastic canvas, I decided to do variations of four way bargello, orienting them to hang as diamond shapes.

These required more planning on graph paper. Whatever the design, an important part of working four way bargello is to mark your stitch surface from corner to corner with guidelines. The easiest way to do with is with just a bit of sewing thread.

Once your pattern is worked out on graph paper, it's easier to start stitching a row that's in the middle of your pattern. The other colours are then worked in or out from there.

Once this first row of stitches is worked, the diagonal guidelines can be removed.

Here is the completed front of one pattern I'd worked out.

Can you spot my mistake?

Here's another variation of four way bargello. Like one of the star ornaments, this one left an empty space in the middle, which was filled the same way as the blue, green and gold star ornament, with a gem and glitter glue.

These ornaments had their backs and loops attached the same way as the star shaped ornaments. I used red yarn for them, which worked our rather well, but doesn't photograph well!

Would we do this again?

One of the fun things about using our Christmas tradition of making new ornaments every year is trying out new methods, materials and styles. Some of these become favourites we go on to use for other things throughout the year. Some... not so much.

For these ornaments, I really like how they looked when done. The metallic cord reflects light nicely, and the pre-formed shapes make the job easier.

About the only real difficulty I had with this pattern was that it took a fair bit of oomph to work the stitches, with such a large needle and such thick cord. I had to take breaks in between working on them to prevent blisters on one of my fingers, and I found colour had come off the cord onto my hands as well. The cord is actually quite colourfast, but after yanking on it as much as I was, it still left marks.

Overall, I give our 2012 ornaments a thumbs up for attractiveness, and they are something I would do again. Just not very often!

Materials for this project.

If you're ready to try your hand at making these ornaments, here are some materials you will need. 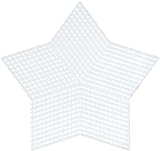 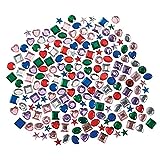 Adhesive Back Craft Jewels (500 Assorted Pieces)
These gems come in handy for all kinds of projects!
Buy Now

What do you think? - Is this a project you'd like to try?