My aim with DIY projects around the home is to look for innovative space-saving ideas and save costs on materials by recycling.

Storage Solutions on a Shoestring by Remodelling Old Furniture

What do you do with an old broken magazine rack, part of an old coffee table and a couple of oak floorboards; you remodel it to make it more space efficient, more functional and stronger than before. This was our solution to an old quest of replacing an old magazine rack that broke years ago.

I like repurposing and upcycling old furniture, especially when they are made from real wood; although optionally you could just chuck it away and buy new. 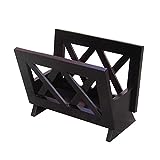 Frenchi Home Furnishing Contemporary Magazine Rack, Black
The magazine rack featured in this article, it’s the one we loved and used for years until it eventually broke; and as shown in the article on this page the one I modified, with a bit of DIY, to meet our own requirements. A traditional style magazine rack that looks great sitting in your living room, and functional, provided you have the right space to floor stand it where it’s to hand and not going to get in the way for people to trip over e.g. tucked away to one side of a sofa or between a couple of armchairs.
Buy Now The Downside of Magazine Racks

In the distant past we bought a rather nice wooden self-assembly magazine rack that served us well for many years; but it was big and bulky and wherever placed would be in the way, so would end up being shoved in a corner making casual access to magazines less convenient.

The magazine rack was a good size; wide enough for keeping lots of magazines, but only had one divider (in the centre) leaving a wide space either side where magazines which need supporting would just flop, curve, bend and slip down to the bottom of the magazine rack making it difficult to find them; and with so many magazines bunched together with no division you often waste valuable time thumbing through loads of old magazines trying to find the one you want.

As with a lot of self-assembly furniture the magazine rack although of good overall design, apart from not having enough dividers, was inherently weak and needed minor maintenance a couple of times to strengthen the divider and base. However, when one of the wooden side panels completely split in half and the whole thing fell apart my wife didn't want me to repair it specifically because it was all too often shoved in a corner out of the way where it was inconvenient to use. So I took the pieces of the broken magazine rack down to my shed for scrap wood (for use in future DIY projects) and we entered an era of coffee tables becoming the new dumping ground for magazines.

Thinking Out of the Box

Observing what people do and remodelling old furniture to meet those needs. After years of a perfectly good side table (part of a nest of tables) being used as a dumping ground for magazines when it could be better utilised as a proper coffee table, if only a suitably functional magazine rack could be found, I decided it was time to think out of the box to find the solution.

Observing over time the quantity of magazines kept on the coffee table isn't that great and would only take up half the space of the old magazine rack, it occurred to me that cutting the old magazine rack in half (lengthways) would provide sufficient storage space for the magazines. And adding a divider in the remaining half would make the area either side of the divider narrow enough to prevent the magazines from bending and slipping down as they use to.

It also occurred to me that the magazine rack is about the same length as the coffee table so if it was redesigned correctly rather than getting in everyone's way on the floor, with people knocking into it and tripping over it, the magazine rack could just nestle in next to the table out of the way and yet be to hand.

So it was off to the shed to see what materials I had to hand to make the design a reality. And on sifting through all the odd bits of scrap wood I came up with two short pieces of oak floorboards leftover from recently relaying our upper landing with oak flooring; part of an old coffee table top, the rest of it having been used to make a remote control holder; and a divider (originally for LPs) from the days before CDs, a time when we kept our LP collection in the bottom of a hi-fi cabinet.

The oak floorboards would form the new base and back of the remodelled magazine rack and the section of table top the new front.

A little research can save a lot of money

The glue I used in this DIY project was a 'no nails' wood glue from a 'Trade' tools and accessories supplier that also sells to the public at trade prices; there are quite a few in Bristol and they are worth seeking out. In the past I've bought the wood glue and 'no nails' wood glue from one of the DIY supper stores, but it's not cheap. Recently, in sourcing a supplier for a specific make and model of a belt sander needed for another DIY project we stumbled across trade centre that supplied it. The great thing about trade centres, where they are tucked away on industrial estates, is that as well as selling to the trade at trade prices many of them also sell to the public and at 'trade' price. I know of a few in Bristol, most are building merchants, one 'electrical supplies', a glass merchant and now a tools and tools accessories. The one exception is a confectionery trade centre that will only sell to trade; and from my experience 'trade centres' on the high street rather than on an industrial estate (often builders' merchants) will have a two-tier pricing structure e.g. they sell to the public at retail prices but give trade generous discounts.

In this case, when we found a trade centre specialising in tools and accessories tucked away on a trading estate that sold the belt sander I was seeking I also purchased some 'no nails' wood glue at the same time and have since gone back for more not only because it's a quarter of the price we normally pay in a DIY store but also because it's a better product. The 'no nails' we now buy sets very quickly, sometimes too quick in that if you don't wipe off any surplus glue immediately it's difficult to clean off afterwards. Not only that but this glue defiantly adheres better and gives a much stronger bond than other 'no nails' I've use in the past; so I'm well pleased with it.

So it pays to source your materials and seek out the best suppliers that give the best service.

The modified magazine rack complete and ready for reuse once I've got a quiet weekend when I’m not doing the gardening, and have time to give it a proper rubdown and a lick of wood stain and polish to bring it back to its former glory. 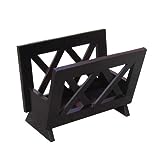 How Useful are Magazine Racks

Do you find magazine racks useful or just a waste of space?

Your views and comments on magazine racks and remodelling old furniture