My aim with DIY projects around the home is to look for innovative space-saving ideas and save costs on materials by recycling.

How to Clean and Restore the Old Painting

Hanging in our home office is an old oil painting painted by my great grandmother about 100 years ago of flowers and leaves painted on 3mm opaque white glass and framed in a decorative gold painted frame. After hanging on walls for the best part of a century there was some grime on the glass surface, frame and painting which with the help of a friend we were keen to gently remove without damaging the oil painting itself.

The Glass - 3mm Opaque White Glass Front and Back Oil Painting of Flowers and Leaves on Glass

Although not many people will have old oil paintings on glass this picture is not dissimilar to the practice of Tole painting which became established in New England in the 18th century and is often done on tin and wooden objects, as well as sometimes glass. So maybe there are tips and ideas here to give inspiration and ideas for similar home restoration projects; although I would heavily advice against tackling anything of any real value unless you know exactly what you are doing.

Introduction to the Paintings History and Restoration

This oil painting of flowers and leaves was pained on white opaque glass by my grandmother (Gertrude Rosa Burgess 1874-1958). On removing the glass from its frame to give it a good clean we noticed writing in pencil on the back of the glass that seems to read something like:-

She would have bought the glass and had it cut to size locally, the 4/6 is four shillings and six pence (old money), which in today's money is 22.5 pence. The average weekly wage at the time was about 30 shillings (1.50) so the cost of the glass was a best part of a day's wage for an average worker in Britain in 1912.

We don't know when she did the painting but my guess is probably after she was married in 1905 when she was 31 and certainly before 1940 when the company who professionally framed the oil painting ceased trading; in 1940 she would have been aged 66.

The outer frame dcor appears to be a plaster cast moulding glued to a wooden frame back. In three places chunks of this plaster moulding has come off of which two have been painted over in gold suggesting that decades past someone has tried to make good the damage by repainting the frame with gold paint. In the process they left a large swathe of gold paint on the silver inner frame, and got some gold paint on the manufacturer's label for the framing. There are also several deep grooves on the bottom inner silver frame, and similar grooves diagonally opposite on the top inner frame, suggesting some may have tried to clamp the inner frame for some unknown purpose, it wasn't to repaint the outer frame as these marks appear to have been made after the outer frame was repainted gold as it cuts into the gold paint that got left on the silver frame. 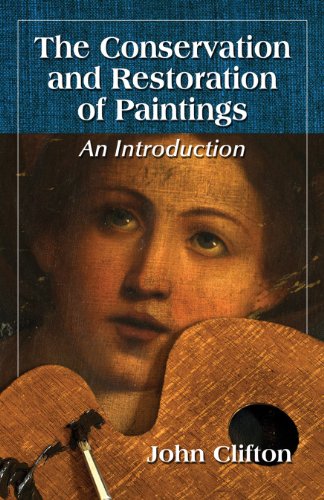 Restoration of the Oil Painting on Glass

If it was an oil painting on canvass I wouldn’t even attempt to clean it but oil paint on glass seems a fairly safe bet to me; both are robust material that are not going to get damaged easily with a bit of cleaning although our approach was one of being careful and cautious.

A friend volunteered to help because he’d done similar restorations himself on a couple of his own paintings and could offer some good advice, although I stopped him when he wanted to go further and coat the surface in clear varnish after its cleaning to protect the surface. Yes he’s right, a coat of clear varnish would provide added protection and for a modern painting it may be a good idea; but I wanted to restore it back to its original glory, not enhance it as it would not then be authentic. Also, after a 100 years the glass wasn’t that dirty, no more than a glass window that needs cleaning, so I’m confident that with a good clean it will last another 100 years quite happily with the occasionally dusting.

No knowing how stable the oil paint was he didn’t want to take any risks and use anything that could chemically react with the paint so he ruled out using specialised painting restoration liquids because they contain ammonia and he rejected our washing up liquid because it has added lemon (which is also a cleaning agent). Instead he bought around some of his own washing up liquid which had no additives with some cotton buds and quite happily sat down gently cleaning it with warm tap water with just a drop of basic washing up liquid using the cotton buds. Once cleaned he just gently wiped over the whole area with a damp J-cloth to gently remove any surplus washing up liquid.

It didn’t take long to clean the front of the glass as it was just surface dirt that came off easily. The back of the glass had more grime on it, I guess unlike the front because it was hidden it hadn’t been cleaned and dusted since the picture was originally framed so over the decades oils and moisture from the wood backing had imparted itself onto the back of the glass. I gently cleaned the back of the glass with soapy water being careful not to erase the pencil writing on the back.

Once the painting had been gently cleaned it was over to me to clean the picture frame and reframe the picture. Cleaning and Restoration of the Picture Frame

For the picture frame, cotton buds wasn't really practical because the build-up of grime on the picture frame was greater on the frame than on the glass so it would require more vigorous cleaning than we did for the oil painting itself. Therefore, to also get into all the nooks and crannies he suggested I use an old soft toothbrush with a little washing up liquid and warm water.

This I did, giving it two good washes which got most of the grime off, and I stopped there as I didn't want to go further and risk removing the gold paint or damaging the plaster moulding.

It was after I'd given the frame a good clean that it became obvious that the outer frame had been painted or repainted in gold sometime after the picture had been professionally framed. Therefore as the gold paint on the main picture frame is not original I feel I can legitimately justify repainting it myself to make a better job than whoever previously painted it; and at the same time repaint the inner silver frame to paint over the areas where one of my ancestors had accidentally painted it gold.

On the back of the picture frame the old backing paper was loose around the edges and flaking and had to be removed to ensure the new paper backing would stick firmly to the frame. To clean off this old flaky paper I gently rubbed a chisel along the edges to remove the really loose paper and then brushed all the edges with a stiff brush to remove the remaining paper.

To restore the picture frame back to its former glory I'd like to use modelling paint (the same paint as used for Airfix models). There's no hurry (the painting's not going to go anywhere) so this is something I can do anytime next summer when I have a spare moment. All I'll need is just a couple of small pots of modelling paint, gold and silver and a couple of small brushes and a quiet afternoon. I might also be tempted to fill the marks around the inner frame with a little filler before repainting to give it a real nice finish.

Visual Guide to Restoration of the Frame Reframing the picture was quite straightforward, the most difficult part was detaching the manufacturer’s label from the frame so that once reframed I could re-stick the label back onto the new paper backing. The old paper backing had decayed and become very brittle. The label was in a better state but was showing its age and was cracked along part of the line where the frame met the picture backing. To remove the label completely I gently eased a razorblade knife under the label cutting into the wood rather than the label until the label came away.

Once I’d salvaged the label I:-

Once reframed it was just a case of rehanging it on the home office wall next my great grandmothers other artefacts, namely her hearing aid and letter opening; as it seems so fitting to have the oil painting next to other personal belongings of the artist, and more fitting that above is a colour painted and framed photo of her with her dog Sam.

Steps to Reassembling the Picture Frame Before and After Pictures of Oil Painting on White Opaque Glass

Before I embarked on this ambitious DIY restoration project to clean the old framed oil painting of flowers and leaves (painted on opaque glass) looked rather good hanging on the wall in my home office. However, after restoration (as shown above) it looked spectacular; almost as good as the day when it was painted all those years ago by my great grandmother.

Would you tackle restoring an old family heirloom such as a painting or a piece of furniture yourself?

Your views, comments and tips on painting and picture restoration