This lens is about the art of a very wonderful artist, Lady Syamarani. I have known about and loved her art for many years, but recently I have gotten to know her on a more personal level. Because I find her art to be transcendental and to have increased the quality of my life, and because the artist herself is such a serene, ladylike person, I have decided I must share it with you.

The word transcendental is apt. Why? What is the meaning of transcendental? That which transcends. Transcends what? This world as we know it. We know this world by our 6 senses - our sense of touch, taste, hearing, smelling, seeing, and the mind. This art by Syamarani goes straight to the heart. I know that sounds very cheesy but it is true. I have personally seen it.

When I travelled with the artist and sold her paintings, I personally witnessed people fall in love with this art. I witnessed them become emotional. I witnessed them speak about how their lives have changed for the better because of this art, and this woman. And I witnessed them order posters of her most famous paintings, without knowing anything about the paintings' content or the artist. I think these are miracles that were enacted because these paintings are transcendental. They go beyond.

If it's all too hippy-dippy for you, click away. But if you are intrigued, or want to see the beautiful artwork, or the woman and her teachers and her methods, please, keep reading.

I cannot tell you how much I love this lady. She is one of the sweetest people ever. She is very funny and very smart. Her memory is phenomenal.

She is always very humble about her art. Because she painted under the instructions of her spiritual teachers, she always gives credit to them and their potency and never any credit to herself. I think she is amazing in and of herself.

Syamarani dasi - or Jadurani - graduated from Music and Art High School in 1964. At New York City College she majored in art. She was somewhat of a hippie in the 60s, and according to her current book in progress, "I thought I was God."

When she met her spiritual mentor in 1966, she realized at once that she was not God. Her teacher, Srila A.C. Bhaktivedanta Swami, helped her to begin the process of learning who God is. He employed her in painting many spiritual art works for his many books, which he was translating from the ancient Sanskrit and gifting to the world. Many of Syamarani's old paintings can be seen in the books of Bhaktivedanta Swami, which he called "windows to the spiritual world."

She was given the spiritual name "Jadurani", meaning queen of the ancient Yadu dynasty, along with the suffix 'dasi', meaning servant. This is in relation to the philosophy of humility and servitude that is part of the gaudiya vaishnava tradition which Syamarani follows. Later she was given the name 'Syamarani', as inspired by Bhaktivedanta Swami in a dream to his spiritual successor, Srila Bhaktivedanta Narayana Maharaja. Her juniors call her "didi," a respectful term in India which means older sister or aunty.

Having painted over 200 paintings for the temples and books of A.C. Bhaktivedanta Swami, Syamarani went on to paint more for the books and temples of Srila Bhaktivedanta Narayana. She has also done paintings for magazines, bass reliefs for temples in India, and calendars of line drawings.

Her style combines East with West. She cites inspiration from Renaissance painters such as Raphael, as well as the Waterhouse school of art. From India, she is inspired by the Brijbasi Company and the artist Benarji.

You can find a fuller biography of the artist on her website, cited below. Her website hosts a gallery and information on how you can order her art work.

This painting was requested by Srila Bhaktivedanta Narayana Maharaja when he asked Syamarani didi, "Can you paint my heart?"

Pictured in this painting are the living embodiment of love, the goddess Radhika, and her loving consort, Sri Krishna. Krishna is often pushed to the wayside as yet another Hindu god, but really if you read his pastimes, he is also the embodiment of love, especially when he is with Radhika. Playful and sweet, always conquered by love, Krishna epitomizes his name, which means, "the all-attractive one."

Syamarani has depicted Radhika and Krishna sitting together in an intimate space. Joyous at seeing each other, they are weeping in emotion. Hidden in the greenery behind them are their dearmost friends, the young girls called manjaris, who intimately serve them and consider the divine couple their life and soul.

The original painting is hosted at Srila Narayana Maharaja's temple in Vrndavana, India, Sri Rupa Sanatana mandir. It is worshiped there, because in gaudiya vaishnavism, a picture is as good as the lord himself. Therefore this painting reveals the forms of Radhika and Krishna as they are, and isn't just a painting.

Syamarani didi has many stories about what it took her to paint this, and all the things going on in the painting. Much of her commentary on her artwork is featured on a CD called "Bhakti Art," which hosts all of her hundreds of paintings, along with commentaries on each.

Paintings - Gallery 1 - All paintings copyrighted. Do not use without permission. 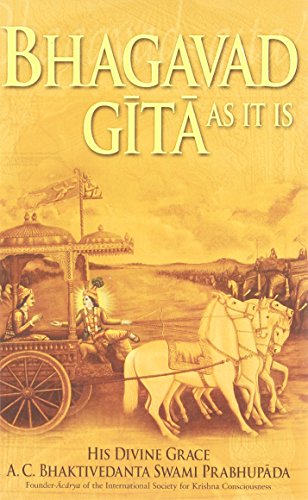 Bhagavad-Gita As It Is
Buy Now

The Way of Love: A Booklet on the Real Meaning of Love, the Essence of True Spirituality
Buy Now 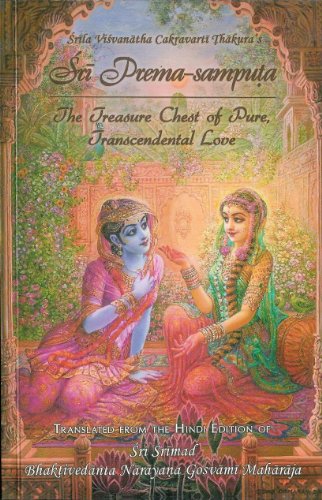 The artist at work

These videos feature interviews, artwork,the artist's spiritual teachers, their books, and glimpses of how sweet all these people are.

What do you think of Syamarani didi's art? Which is your favorite?