Find out about the famous American painter Winslow Homer.

This site shares information about the paintings and artwork of Winslow Homer, including:

He was raised in Cambridge, where he developed a love of art and the outdoors. At the age of 19 he began his career as an illustrator, apprenticing at the J.H. Bufford lithographic firm in Boston. He then decided to become a freelance illustrator.

1859: Homer moved to New York to work for Harper's Weekly, serving as artist-correspondent for the magazine during the Civil War.

After taking some art classes at the National Academy of Design, he decided to focus on oil painting. He quickly gained international recognition as a painter, and in

1873: he decided to work in watercolor and found great success in his experimentation with light and color in this medium.

In the mid-1880s: Homer moved permanently to Prout's Neck, Maine, an isolated area where he built a studio and focused his paintings on man's struggle with nature.

Also during the 1880s he worked on a series of etchings based on his paintings.

Homer continued to paint for the next twenty years, vacationing summers in places such as the Adirondacks and the Bahamas to capture varied landscapes, until his death in 1910.

In terms of painting, the primary medium used by Winslow Homer's was oil painting.

However Homer also did commercial illustration and chronicled the New York City social scene in order to make a living.

He subsequently developed the use of watercolour paints for his artwork.

Once he settled in Prout's Neck in New England he turned to the portrayal of the sea.

"The book reproduces all the major paintings as well as sketches and other work, and provides a useful overview of Homer's career."

a tour of Winslow Homer's studio on Prout's Neck, Me.

Homer's Studio at Prout Neck was acquired by the Portland Museum of Art who then removated it.

It now opens for tours for small groups 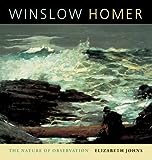 Winslow Homer: The Nature of Observation

BOOK: Winslow Homer: The Nature of Observation - by Elizabeth Johns

Johns examines and analyses the life his life and work of Winslow Homer from the perspective of developmental psychology. She reviews the artist's correspondence and his entire body of work--illustrations for wood engravings, watercolors, and oils. The book includes 75 black and white illustrations and 40 color plates

Below you can find listings of where you can see the work of Winslow Homer in art galleries and museums.

Watercolors by Winslow Homer: The Color of Light (Art Institute of Chicago)

Watercolors by Winslow Homer: The Color of Light

This book reviews Homer's technical and artistic practice as a watercolorist. It includes over one hundred watercolors - including twenty-five rarely seen examples from the Art Institute of Chicago's collection - plus more than thirty related drawings and paintings. It also looks at the experiences that shaped his remarkable development

This book traces the development of Homer as a watercolorist, shows a selection of his landscapes, seascapes, and portraits, and discusses his distinctive style and techniques

The Watercolors of Winslow Homer

The Watercolors of Winslow Homer

Donelson F. Hoopes devotes a beautiful volume exclusively to the most popular of all American watercolorists. Published in cooperation with The Brooklyn Museum and The Metropolitan Museum of Art, the book includes virtually the entire Winslow Homer collection of both museums.

The companion book to the Cooper-Hewitt National Design Museum's exhibition of the same name of America's scenic wonders captured by three of the greatest artists of the 19th century.

VIDEOS: Winslow Homer on You Tube

What do you think about Winslow Homer? - Let me know what you think - but please do not spam