Being a NASCAR team owner and lead driver is a complicated job under any circumstances. As a driver, you are looking for anything that can put speed in the car. Cost is something for the bean counters to worry about. But putting your name on the building means that you too are now one of those bean counters. It's your job to do what's best for the entire team; from the drivers in the cars to the janitors sweeping up the shop, everyone's livelihood depends on the decisions you make.

Tony Stewart's job is a bit more complicated still. He is now the co-owner of one of NASCAR's two operations running at the four car limit- from a team that had only two cars only two years ago. Instead of having one fellow Hoosier that he has a long and stable history with, Smoke will now have three teammates that he's far less familiar with (at least in the capacity of working together). The only one of those three that he's spent any time working alongside is Danica Patrick, perhaps the most polarizing figure in all of stock car racing. The others are long-time rivals that Stewart has beat fenders with on more than one occasion.

To understand the 2014 prospects for Stewart-Haas Racing, it's worth taking a deeper look at the four drivers who will represent the team on the track and how they got there in the first place.

Get your Smoke fan gear before Daytona! 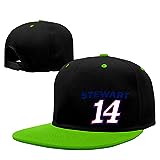 First up is Stewart himself. In addition to the challenges of team ownership, he's also dealing with enormous physical challenges. A broken leg sidelined Stewart for the final three months of 2013, the longest time he has spent on the shelf in decades. Recovering from that kind of layoff (and injury) is something far more easily done in your twenties than it is for grizzled veteran Stewart has now become. Part of what separates the good from the great is the willingness to lay it all on the line; will Stewart be able to drive with the same reckless abandon that won him three Sprint Cup titles?

Second in terms of team tenure is the #10 GoDaddy car driven by Danica Patrick. Even the most gentle observer would have to call her 2013 season a letdown. She finished 27th in series points, only two spots ahead of Smoke despite running 15 more races. After a surprising run (and top ten finish) at the Daytona 500, Patrick failed to lead a single lap or finish in the top ten the rest of the season. What's worse is that instead of improving as the season went on, Patrick regressed. Her second visit to tracks often saw poorer finishes after non-competitive runs. With her sponsor signed only through the end of this season, Danica has little room for error. She must improve- or she may well find herself little more than a footnote in the history of stock car racing.

The third member of SHR for 2014 will be Kevin Harvick. After spending a decade-plus replacing Dale Earnhardt at Richard Childress Racing, Harvick will finally have the opportunity to race as his own man- and he will do it running for a fellow racer. With a full sponsorship package, the match made sense for all involved when it was announced. He also has a career record well above that of the driver he was replacing and performance has always been requirement number one for Smoke. Harvick does have a fairly big personality but ego isn't necessarily a bad thing for a race car driver.

The fourth and final member of this team, however, came as a shock to many observers (including the one inside the #14 car). With Stewart laid up in the hospital, team co-owner Gene Haas signed Kurt Busch to run a (previously) non-existent fourth entry. Haas believed in Busch enough to spend his own company's money sponsoring the driver. By the time the pain meds had worn off, Busch's signing was essentially a fait accompli. Haas admitted as much, saying that bringing “the Outlaw” aboard was his decision and that Stewart wasn't exactly thrilled with the concept up front.

Stewart had (and still has) plenty of reasons to be nervous about adding Kurt Busch. Less than 18 months ago, Busch was persona non grata among NASCAR's elite teams. After yet another public meltdown, he'd worn out his welcome at Penske Racing. He took the only ride that would have him, running a non-sponsored car for James Finch at Phoenix Racing. He almost managed to lose that ride as well and was suspended by NASCAR for yet another media outburst that summer. Somehow Busch managed to catch on with Furniture Row racing towards the end of 2012 and parlayed that into a Chase berth for the single car team in 2013.

After last year's injury, Stewart knows all too well how events involving one car can quickly bring down the entire team. Haas himself may be sponsoring Busch's car but should Kurt have another issue it will reflect on more than just Haas Automation. Will Budweiser, Bass Pro Shops and GoDaddy want their brands on a Stewart-Haas car if Busch goes off the deep end? Or will they follow the lead of NAPA Auto Parts, who ended a relationship with Martin Truex Jr. last year over the actions of his teammates? It's a very real risk, particularly for a team looking to extend its current sponsorship agreements beyond the coming season.

Finally, it's also worth noting that SHR's cars, despite coming from the same assembly line as series champ Jimmie Johnson, were not up to par last season. Stewart himself was Chase-eligible only due to a wild card and Ryan Newman was a championship contender in name only. Many (including Smoke himself) believed the struggles had much to do with adding a third team and diluting their talent pool. If a third team was a struggle, how will the outfit do in adding a fourth?

Despite the various warning signs, there are also reasons to be optimistic. Stewart has always been at his best when he feels as if he has something to prove. With so many predicting doom and gloom for SHR, Smoke certainly has that right now. Likewise, his teammates all enter the season with points to prove and scores to settle. Harvick wants to prove it was his driving that carried RCR and not the other way around. Busch and Patrick are both trying to prove they belong (albeit for very different reasons). The team will not lack for motivation.

Nor will the team lack for driving talent. Busch and Stewart are both former series champions. Harvick is perhaps the best active driver to not win a championship. The three also come at racing from very different perspectives so the potential for each to learn from the other is very real. Patrick should also benefit from having additional voices in the garage and in drivers' meetings. With Mark Martin serving in a testing/team coach capacity, she will finally have some real experience to lean on in her second Sprint Cup season. For all his talent behind the wheel, Newman had little incentive to tutor Patrick and Smoke spent a third of the season flat on his back. With improved cars and coaching, 2014 could prove to be a breakout year.

So needless to say 2014 is going to be an interesting season at Stewart-Haas Racing. What will happen the first time these teammates find themselves running 1-2 with five laps to go? When Busch doesn't get a car to his liking will he lash out at the team and media? If Patrick's regression continues, how much patience will Stewart and GoDaddy show in keeping her in top-flight equipment? What if Gene Haas (sponsor) wants something that Gene Haas (owner) knows is a bad idea? We'll all have a front row seat for the answers as 2014 unfolds.

How will 2014 turn out for Stewart-Haas Racing?