Going into last year's finale at Homestead, the question was not whether Jimmie Johnson would win a sixth Sprint Cup championship but how many points he would win the title by (19, as it turned out). Despite seven wins and 20 top ten finishes, Matt Kenseth could do little more than watch as Johnson climbed one step closer to NASCAR immortality. With the start of 2014 less than a month away, Jimmie faces a task once thought near-impossible; tying the record of seven series championships before his 40th birthday. Johnson will face challenges both from other drivers and the sport itself, and his pursuit of history will be one of the biggest stories this coming season.

The numbers alone are startling. In 12 full time seasons, Johnson has walked home with the championship as often as he has not. He has never failed to finish in the top six in points or win less than two races. His “off” year in 2011 was one most drivers would consider that a career year. It was his only time outside of the top five in points and included two wins and 21 top ten finishes.

Johnson has also mastered the art of peaking when the stakes are highest. He and crew chief Chad Knaus so completely figured out the Chase system that NASCAR virtually had to act this past off-season and overhaul their playoff system. For the past decade, the #48 team regularly started strong, spent the middle portion of the season in test-mode fine-tuning their operation, then sprinted to the finish over the last ten races. Johnson is a few bad breaks away from being an eight-time defending champion and it's been more noteworthy when he's lost than when he's won during that time frame. 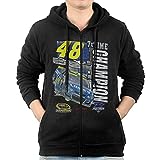 There's no reason to believe that for the first 26 races this year 2014 will look much different for the Lowe's team. While every bonus point going into the Chase matters (just ask Carl Edwards), Johnson has shown that a minor points deficit means little in his grand scheme of things. Better to perfect a setup in May and dominate in October than to win a race that doesn't mean anything in terms of a championship. So there's every reason to expect more of the same in the coming season. There's simply no reason for Hendrick Motorsports to show everything the #48 has early on.

But the ten races that comprise NASCAR's Chase are another matter. The new points format is broken into four separate segments. The first three segments are made up of three races apiece and eliminates the four lowest-ranked drivers without a win during that segment. Segment one (Chicago, New Hampshire, Dover) should prove to be little trouble for the #48. Dover in particular is perhaps Johnson's best track and even bad luck at one or two of the tracks shouldn't keep Jimmie out of the next segment.

Segment two may well provide the biggest track-based challenge for a seventh title. Race one is at the Kansas Speedway, a race that was an abysmal failure last year based in large part on a new tire compound Goodyear rolled out. While this year's Chase race should be better, it's difficult to peer into the crystal ball right now and guarantee a Johnson victory. Likewise, race two at Charlotte is no lock for the #48. While he has six wins at the speedway, he has none since 2009- a virtual desert for the six time champion.

Then comes race number three, the ultimate wild card; Talladega. Any race at a restrictor plate track is nearly impossible to rely upon given the nature of plate racing. Too many cars in too small a space usually leads to carnage in the last ten laps with accidents that take out half the field. Combine the known chaos with Dega being the last race in segment two and you have a recipe for disaster. 12 drivers will be competing for eight remaining playoff spots and only two of those drivers (at most) will be guaranteed to move on. Everyone else will need a win to cement their place in NASCAR's Elite 8. It's safe to say that this year's Geico 500 from Talladega will feature plenty of work for the tow trucks over the final laps. Even running in the back is no guarantee to avoid the drama and unless Johnson wins at one of the prior two events, he'll need to stick his neck on the line right along with everyone else.

It's also worth noting that anyone with a calendar and a NASCAR schedule will see the same potential for elimination in this three race segment. That will up the ante on teams at both of the prior events to go for a win if it's at all possible. Why risk your entire season on a last lap mad dash at a plate race if you can lock down a spot at Charlotte? So I would firmly expect a number of different strategies to come into play at Kansas and Charlotte. Is it worth giving up a sizable amount of horsepower to extend a car's fuel mileage? Each team will have to make that decision for itself.

If Johnson can get through segment two unscathed, he's a virtual lock for the Final Four. Segment three features races at Martinsville, Texas and Phoenix. Johnson has victories at all three tracks and runs at or near the front there regularly. The rural Virginia track in particular has been a Hendrick playground for years, with other drivers having a chance only when one of the favorites dropped the ball. So there would be every reason to believe that Johnson would be heading to Homestead with history on the line.

Other than segment two, the final segment presents the biggest challenge to Johnson's chance to repeat as Sprint Cup champion in 2014. A single race, winner-take-all event at Homestead-Miami Speedway will determine who holds the title for an entire season. Regardless of whether or not this is the right way to crown a NASCAR champion, it's what the series will be doing. So how will it impact Jimmie's pursuit of a seventh title?

The reality is that Homestead is perhaps the worst possible place for the season finale from Johnson's perspective. The team has tried to put a good face on it- Johnson himself said that they've run well there when they've needed to. But the fact remains that Homestead is one of a handful of Sprint Cup tracks that Johnson has never won at. Chevrolet as a manufacturer has won only three of the last ten events in South Florida. Hendrick as a team has one win (Jeff Gordon's season-ending victory in 2012) and Johnson's average finish at the track is 14.8- his worst for any Chase track outside of Talladega. Meanwhile, despite struggling elsewhere on the circuit, Ford has won six of the last ten Homestead races. Should they do so again in 2014, there's every reason to believe Ford can take home the championship even if they remain a step behind the Chevys again this year.

So while the controversy around NASCAR's decision to implement Chase eliminations continues to rage, its impact on Jimmie Johnson is undeniable. It's far too early to say that the new system will stymie Johnson and Knaus in the pursuit of a historic seventh joint championship. But watching how the team adapts in the attempt should prove to be noteworthy to say the least.

Will Jimmie Johnson win a seventh Sprint Cup title in 2014?