After you view this hub...

After you have watched the video and read this hub, can you PLEASE scroll to the very bottom, and simply give me a thumbs up or thumbs down. THANK-YOU!

These are the simple, straight-forward instructions on how to do the scheduled maintenance task of replacing your Serpentine Belt on a Ford Diesel Truck. The truck that is referenced is a 2000 Ford F-350 7.3L Diesel.

Other maintenance hubs on this same vehicle 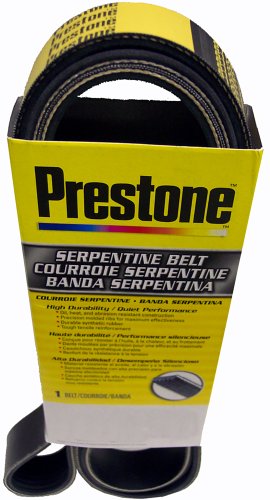 1) Purchase the belt ahead of time online or at your neighborhood parts store . If you have sensitive hands then buy protective gloves also.

3) Look down and directly in front of you behind the fan. There are several pulleys all connected to a single belt. You are going to be replacing this belt.

4) Note the way that the belt goes around those pulleys, and the path that the belt takes to do so. Write this down on a scratch piece of paper if this helps you. There should be a belt path diagram on the front of your vehicle, under the hood, on the right side near the right side battery.

5) If you look down, and to the left, you will see a pulley behind the fan that looks considerably smaller than the others. This will be your Tensioner Pulley, which does just what is described: Adds tension to the serpentine belt to keep it tight against the pulleys by increasing friction, and reducing slipping. As the belt becomes worn it can develop cracks and it will begin to lose some of this friction. It can also lose grooves, which then becomes unsafe.

6) The Tensioner Pulley is spring activated. All you need to do is rotate this pulley in the opposite direction to reduce the force of the spring long enough to slip the belt off of the pulley. The opposite direction will be counter-clockwise. To do this, insert the head of your 3/4" ratchet into the square hole provided in the Tensioner Pulley (DO NOT TURN THE BOLTS ON THE PULLEY ITSELF), and simply lift up, attempting to turn the entire assembly counter-clockwise. Approximately 1/2" of movement is needed to be able to slip the belt off of the pulley.

7) Remove the belt from all pulleys.

8) Ford was nice enough to run the radiator hose through the middle of the belt. You need to momentarily remove this hose to therefore take off the belt. To do this, you will need pliers to loosen the hose clamp, and take the hose loose from the top of the radiator. Minimal radiator fluid will be lost. There is no need to drain the entire system for this job. Do this entire job when the engine is cool for obvious reasons.

10) Re-install the belt back over the hose. Re-connect the radiator hose.

11) THIS IS THE MOST IMPORTANT STEP!! Run the belt back over all pulleys, minus the Tensioner Pulley, in the same configuration as it came off. After that, simply lift the Tensioner back up in a counter-clockwise motion with your 3/4" ratchet, and slide the new belt onto the Tensioner Pulley. You may need to rotate more than 1/2" this time, because the belt will be new and therefore not as long. This is a good thing.

If you are a visual learner, much like myself, please take a look at the video below.

This is one of the easiest maintenance tasks to handle on one of these big trucks. It is a cheap fix compared to the towing bill you will receive if this one belt was to break and leave you stranded in the middle of nowhere, or worse, as you are carrying a heavy load up the side of a mountain with your entire family in the vehicle.

This article was originally posted on hubpages at http://franksg384.hubpages.com/. If it is found anywhere else on the internet, it has been illegally copied and posted, and I ask you to simply report it to google or myself at http://twitter.com/franksg384. THANKS!