This wasn't quite how Hollywood wrote the script. But NASCAR and its most popular driver will take it. With Tony Stewart's blown engine and Austin Dillon's multiple wrecks, two of the sport's biggest stories saw their races end in disaster. A piece of debris from a late race caution seemed destined to end his run up front. But Dale Earnhardt Junior finally captured a second win at the Daytona 500 and with one race down virtually punched his ticket for NASCAR's playoffs this fall.

Tony Stewart, returning to a racetrack for the first time since breaking his leg in a Sprint Car wreck last August, once again will leave Daytona without a 500 victory. He's won in a Nationwide car (seven times, tied with Dale Earnhardt senior for most ever). He's won four Sprint Cup points-paying races at Daytona. But 15 times before Sunday he'd started the Great American Race and 15 times he'd failed to land in victory lane. And 16 proved to be no sweeter as Stewart's night ended early with a blown engine.

Missing a chance to win the 500 is bad enough for the three time series champion. But to do so because of a blown engine- at a track where engines face far lower RPMs and far less stress than many other tracks on the circuit- seems to be particularly cruel. He didn't get caught up in someone else's mistake, his car in pieces all over the race track. He didn't make that mistake himself, blocking when he should have let the other line go. No, his Hendrick-supplied engine failed, the third such failure for Stewart-Haas Racing during the past two weeks at Daytona.

No matter what the future may bring, the Hollywood ending of Smoke returning in triumph to finally win the race that eluded him is gone. Even if Stewart should finally break through and win a future Daytona 500, it will never be quite the accomplishment and media sensation that a win this year would have been. One of the biggest stories NASCAR's kickoff race was Stewart's return and it ended not in a blaze of glory but in a whimper.

All the while, few mentioned the former restrictor plate king who drove for Hendrick itself. The man who once dominated Daytona and Talladega hadn't seen victory lane at either track in a decade. Sure, he'd finished second in three of the last four Daytona 500s. But he never seemed like a dominant driver in those races, his second place finishes more the product of last lap heroics than a sign that Junior was once again the Pied Piper of Plates. Critics ignored the season-ending roll for the #88 and instead pointed to his failure to win a single race. With a lame duck crew chief headed for NBC at season's end, why waste time on Dale Earnhardt Junior? 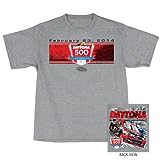 Earnhardt did figure prominently in the other big story of speed weeks. The stylized #3 that his father made famous was finally set to return to active Sprint Cup competition. Austin Dillon, grandson of Richard Childress and friend to the Earnhardt family, has run the number since his earliest days as a racer. He took the number to victory lane and series championships at both the Camping World Truck and Nationwide levels. He's proven himself as a racer and received the blessing of Earnhardt Jr (among others) to run the stylized #3 on a Cup car for the first time since Senior's death over a decade ago. Expectations for the #3 were high enough but Dillon managed to raise them even higher by winning the pole position for the Great American Race.

The race didn't turn out that way. Dillon was unable to hold his spot at the front of the field, leading only a single lap over the course of the event. Worse still, it was his bobble that caused a multi-car accident that effectively ended the days of several drivers including fellow rookie Kyle Larson. But Dillon's run of bad luck didn't end there. With only seven laps to go, Dillon tried to bump draft teammate Newman halfway through the corner and the result was predictable- a second “big one” that consumed several more cars and put the ending of the race in doubt. Dillon, like Stewart, was unable to write the ending that Hollywood (and NASCAR) so desperately wanted.

With Smoke down and Dillon not a factor, Hollywood had just one script left worth publishing; the return of Dale Earnhardt Junior to victory lane at the Daytona 500. Junior stuck to his old strategy of running up front to stay ahead of the mayhem that marred the last 20 laps of the races and the tactic paid off. When a pair of wrecks took out half the field, Earnhardt was safely ahead of the danger.

The other advantage to being up front? As the laps wound down with Earnhardt out front, it became more and more obvious that Junior had a real shot to win. Instead of depending on a miracle push to get near the leader, Earnhardt was that very leader. He had the opportunity to watch what the competition was doing and adjust his own line accordingly.

He also had a teammate in Jimmie Johnson who finally repaid the #88 for pushing him to victory at Talladega a few years ago. The two car tandem ruled the plate races at that time and Earnhardt recognized near the end of that race that his car was a far better pusher than it was in front. So he sacrificed his own chance at victory to push Johnson to victory lane. This time it was Johnson watching Earnhardt's back, breaking up the momentum of Keselowski, Denny Hamlin and Kyle Busch. It may not have been a push but Earnhardt would have found himself freight trained without it.

As the laps wound down the drama continued to build. The field re-started with 13 laps to go and Earnhardt found himself door to door and the lead in doubt of slipping away. Yet the car pulled just far enough ahead to slide down in front and once again claim the undisputed lead. Once again, various cars approached the #88's bumper but none could pull alongside the crown prince of NASCAR. He deftly moved between the high and low lanes to prevent any run from getting close to pushing him out of the lead. Even another late restart and an errant piece of tape could not stop the #88. With the time approaching midnight, Earnhardt completed the Hollywood script and won his second Daytona 500.

The happiest member of Junior Nation may well have been Dale Earnhardt Junior himself. He pulled down the window net and stared out at the cheering crowd, the grin on his face impossible to miss. Though approaching 40, Earnhardt seemed transformed into the driver he was a decade ago- a time when he won several races, dominated the plate tracks and was in the championship conversation all the way to Homestead. Those dreams have never seemed closer and with the revised scoring system Earnhardt is essentially locked into the Chase.

Wouldn't that be the ultimate Hollywood ending?

Is Dale Earnhardt Jr. a legitimate title contender in 2014?