Announcing Jeff Gordon's last ride may have been a mistake

Very few athletes in life get to go out on top in a blaze of glory. Those who have competed at the very highest level of their sport are able to bow out gracefully while they are still among the best. Instead, the competitive fire that launched them to the top often forces them to hold on too long. In Jeff Gordon's case, he remains one of NASCAR's finest drivers. Yet his preseason announcement that 2015 would be his last full time season created an instant farewell tour atmosphere at every track. In doing so, Gordon may have ratcheted up the pressure and inadvertently prevented himself from joining those few before him that managed the Hollywood ending.

To be fair, it's unlikely that Gordon had much choice in the matter. Chase Elliott's Xfinity series championship last year clearly put him on the fast track to a Sprint Cup ride. If Hendrick hadn't made room for Chase he would have risked losing him to another organization the way he lost Brad Keselowski a few years ago. As much as Hendrick admires and respects Jeff Gordon he knows that Elliott is the future and Gordon's best years are behind him. As a businessman, he had no choice but to make room for Elliott. This was particularly true after he signed contract extensions for both Dale Earnhardt Jr. and Kasey Kahne. Jimmie Johnson still has titles in the tank. The only possible ride was Gordon's.

Gordon fans, get your gear on Amazon 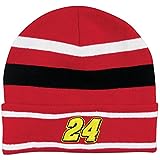 Moreover, the team has already had plenty of pressure to win. The “Drive for Five” slogan (referencing the quest for Jeff Gordon's fifth Sprint Cup championship) has become an almost mythical quest as Gordon's last title was 14 years ago. As Gordon has long noted, all four of those championships came while NASCAR's top prize was the Winston Cup championship and he wants to take home at least one official Sprint Cup trophy before he's done. This is a team that already has the weight of history bearing down on them.

Yet in announcing that 2015 would be his last full time season, Gordon placed enormous pressure on everyone associated with the #24 team. There are no more “we'll get them next year” consolation prizes. There are no moral victories. It is quite literally Sprint Cup or bust in 2015 for Jeff Gordon. No matter how many races he wins or how many laps he leads, the season will now be a failure if the championship goes anywhere else.

Going into the season, Gordon likely believed the added pressure would make no difference. He has been his own harshest critic at times; no one outside of the team could apply more pressure than he was already applying to himself. Yet there is unquestionably added weight in being saluted as a “giant of the sport” and a legend making his last ride on every weekend. Well-meaning fans will speak of how they came out just to see Gordon one last time. Tracks will work to one-up each other in their efforts to honor Gordon's last visit. All of those things will wear on his mind- particularly as the season goes on.

Even if Gordon himself is able to handle the extra attention, there's no guarantee that the other members of the team will. NASCAR is a sport measured in inches and in hundredths of a second. The slightest moment of distraction on pit road could cost the team positions on the track and in the standings. That's also true due to errors made as a result of trying to hard. Athletes in all sports are often encouraged to trust their instincts and to avoid over-thinking solutions. Knowing that every race is its own “last” will only add to the likelihood of mistakes being made due to over-thinking.

Another facet of team pressure comes from that applied to the engineers in the shop. Car and engine tuning is a delicate balance of speed versus durability. It's entirely possible for Hendrick Motorsports to bring a car to the track that's faster than the rest of the field. The challenge is to bring a car that as much of that speed as possible while still being able to last the distance of the race. All teams walk that fine line on a weekly basis but the last ride pressure will push Gordon's team closer to it. Stay close to the edge will provide Gordon with plenty of speed but it will also risk equipment failure or a NASCAR rules violation. Either could end up causing more long term damage than gain.

All of these elements will be magnified as the season goes along. It's one thing to see the #24 up and down the scoring pylon at Atlanta in the season's second race. But what if Gordon goes into Richmond needing a top ten to secure a Chase berth? Will the team's risk tolerance change due to the pressure? Or if Gordon needs a win to advance in the Chase at Talladega, would he risk a multi-car pileup by sticking the nose of the #24 where it doesn't fit?

It's far too early to say that announcing his pending retirement will sink Jeff Gordon's season. But after a second straight poor finish, it's not too early to ask the question. Daytona is a crapshoot where both first and last are distinct possibilities. And getting caught up in someone else's wreck happened to a lot of cars at Atlanta. But prior to that wreck, Gordon generally ran behind all three of his Hendrick teammates and took home a 41st place finish. Running deep in the field makes those kinds of accidents far more likely.

Even if Gordon had not announced the decision he would still be facing the internal pressure. And some of NASCAR's most recent retirement tours have had the air of a professional wrestling retirement match (evidence Mark Martin's “Salute to You” tour- which was followed by another 244 Sprint Cup events including five wins and 44 top five finishes). So it's entirely possible that Gordon will be back down the road and everyone involved knows that. But it's also entirely plausible that Gordon's 2015 will mirror Derek Jeter's 2014; a season for fans and colleagues to congratulate a long-time champion.

Should Hendrick Motorsports have held off on announcing Gordon's retirement?