NASCAR's Chase for the Sprint Cup will come down to a single race to determine a champion between four different drivers. Unlike in years past, performance in the weeks leading up to the finale will be worth no more than a ticket to the dance. The idea was to create a Game Seven environment at 200 miles per hour, a high stakes race where Ricky Bobby's motto of “First or Last” would become reality. Who will withstand the pressure and grab the brass ring? Another Left Turn takes a look before the Chase kickoff at Chicago.

Click here for part one, the Challenger Round of 16

Click here for part two, the Contender Round of 12

Click here for part three, the Eliminator Round of 8

As a reminder, the statistics quoted will generally refer to the last ten races at Homestead. It's a deep sample size as NASCAR only visits South Florida once a year. Going back further might be interesting but hardly useful in trying to see who will take home a championship. In addition, with the points reset going into the event (and no bonus points for wins or laps led), there will be no chance of ties or split decisions. Beat your fellow three remaining Chase contenders and you hoist the Sprint Cup.

A look at the four drivers who I believe will compete for the title- both why they will win and the argument against them. The drivers are listed in the order I believe they will finish. Which means, Another Left Turn predicts the 2014 NASCAR Sprint Cup Champion will be...

Why he will win: Jimmie Johnson is a six time Sprint Cup champion for a reason. He and crew chief Chad Knaus long ago figured out how to win a title in the Chase era. They have maximized their ability to find speed at the intermediate tracks no matter what rules package is involved. He's also handled championship pressure in the recent past and come through the winner. Until someone proves otherwise, Johnson is the man to beat.

Why he will not win: For all of Johnson's championship success, Homestead is not one of his better tracks. He has an average finish of 15.7 and his laps lead percentage is a paltry 2.62%. Part of that has come from playing defense in the season finale, needing only to protect a lead as opposed to go out and win. But it has to concern the #48 team that the entire season will hinge on the results of a race at Homestead that Johnson has never won.

Get the champion's gear on Amazon.com 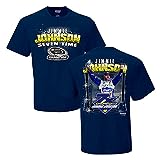 Why he will win: Only one driver in the Chase era has stared down Jimmie Johnson at the end of a season and defeated that team for a championship. That driver is Brad Keselowski, the 2012 series champ. Unlike others, Brad had the mental toughness to take Johnson's barbs and then take the Sprint Cup trophy away on the track. With so much pressure being a part of this race, the mental aspect and former experience cannot be overlooked.

Why he will not win: Of all the remaining contenders, Keselowski has the worst record at Homestead. His average finish is 17.0, his laps led percentage is below the others at 1.25%, and he's yet to finish in the top five at the track (much less win). His success earlier this year at intermediate tracks provide some hope that the Penske team can turn it around, but the #2 simply hasn't shown any ability in the past to win a race at this track.

Why he will win: A Hamlin title victory would validate NASCAR's idea that, “Anything can happen in the Chase,” without question. Yet it wouldn't be that much of a surprise if he can make it to Homestead. Hamlin is the defending race winner and has the second-best average finish (11.2) of the remaining contenders. He's got four top five finishes and has led 6.79% of the laps- more than double the next highest driver (Gordon). Putting Denny in victory lane would require a measure of improvement from Toyota over the final ten races but as they showed a year ago, the power is out there.

Why he will not win: No matter how good his past results at the track, Hamlin remains haunted by the last time he had a chance at the title. In 2010, Hamlin came into the homestretch of the Chase with a lead over Jimmie Johnson. But Johnson started sixth and finished second in the final race, winning the championship over Hamlin (who started 37th and finished 14th). The perception- rightly or wrongly- is that he failed where Keselowski later succeeded. He will need to set all of that aside if he is to dethrone the defending champion this year.

Why he will win: While not his best track, Gordon is the best of the remaining Chasers at Homestead. His average finish is 10.4 (including a win at the track). He's also second only to Hamlin in terms of laps led percentage and has five top five finishes, the most of any Chaser. Finally, Gordon carries a level of motivation into this race that he has never had before. He knows that the end of his career is closer than the beginning. This may well be his last, best chance at a fifth championship. Hungry doesn't begin to describe “Four Time” going into this race.

Why he will not win: Hunger alone will not put Jeff Gordon in victory lane. While his record at Homestead is good, none of those races came with a title on the line. Even in 2007, where Gordon finished second to Johnson in the final season standings, he watched Johnson cruise to a comfortable title win with a seventh place finish. The team hasn't handled pressure well this season and one poor pit stop or one equipment penalty could easily be the difference between a title and fourth place.

Which of these drivers has the best chance to de-throne Jimmie Johnson at Homestead?