We often wake up in the morning and hear on the news what a horrific night it has been on our roads. A few more deaths have been added to the road toll for the year. Road accidents are definitely on the rise. Common causes of road accidents are careless and reckless driving, not observing the traffic rules, ignoring the traffic signs, drunk driving and driving under the influence of drugs.

Everyone has their bad habits. Many drivers have bad habits but they don't even know it. Some drivers develop bad habits the minute they got a licence to get behind the wheel. Others become careless in their driving over the years, thinking they are already experienced drivers . Every driver should examine their own driving skills and think about what a big difference it would make if everybody observes good driving habits and follow the traffic rules. It would prevent a lot of innocent people from losing their lives and our roads would be safer to travel on.

Driving over the Speed Limit and getting a Speeding Ticket

This is called SPEEDING! And speed kills! How many times do people have to be reminded of that? Speed limits and road signs are enforced for a good reason. They show us the permitted safe speed to drive. The faster you drive the higher are your chances of serious injury or even death if you are involved in an accident. What's the hurry? If you are always late for work, all you have to do is wake up early and leave the house half an hour earlier. What is the point of speeding to work and one of these days you won't arrive in one piece?

"If you drink and drive, you are a b***** idiot". Not only have we seen this ad on TV many times but we have also heard of many idiots being caught drink driving. It doesn't cost you an arm or leg to hail a taxi if you want to have a great night out drinking with your mates. It will cost you more in insurance claims and compensation if you have an accident. It will even cost you your family, friends, your driving licence (driving ban) and worse of all, having to live with guilt for the rest of your life if you had run somebody over with your car.

Parking in between Two Parking Lots

Haven't we seen this before when we can't find any parking spaces? I am not sure if the driver has bad parking skills or is he/she trying to save the parking spot for a friend, just like we save a seat for someone who will be joining us for dinner. Is this dangerous? Yes, because it makes other drivers angry especially when the carpark is full. It could cause another road rage incident where someone might get injured.

Drivers have to display a disabled sign on the dashboard of their car if they were to park in the handicapped parking area. These spaces are designated for those who need them and it is no excuse for non-handicapped people to use these spaces when the rest of the parking lot is full. It is also illegal and offenders will be penalised.

Drivers should know the dangers of texting and driving. This is one of the most dangerous thing to do while driving. It doesn't matter how coordinated your fingers are on the mobile phone while the other hand is on the steering wheel. Practice does not make perfect in this kind of skill. Accidents can happen when your eyes are off the road for one split second. If you have been texting while driving and have never been caught, you should stop this idiotic act right now. Accidents happen when you least expect them.

Failing to Signal before Turning or Changing Lanes

I remember the first thing I needed to know when learning to drive was where the handle for the indicator was. The orange flashing indicator lights are the most important signals for letting other drivers know which direction you are changing to. Obviously you can't yell out to let other drivers know you are turning left or right. And how many psychics do you think will be driving behind you predicting what move you are about to execute next? MAKE USE OF THOSE INDICATORS!

Weaving in and out of Traffic

Even if you flash your signals before weaving in and out of traffic, you are putting everybody at risk with your dangerous driving. Why would you want to travel in a zig-zag pattern when you can just drive in a straight line and stick to your own lane? Didn't we learn in mathematics that travelling from point A to point B in a zig-zag pattern is a longer distance and requires more time than travelling in a straight line? 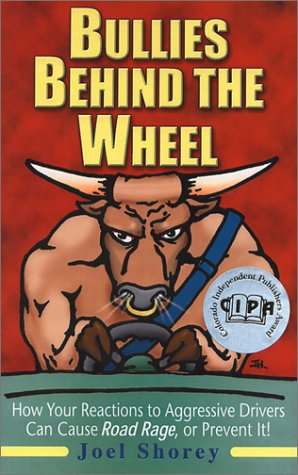 Bullies Behind the Wheel: How Your Reactions to Aggressive Drivers Can Cause Road Rage, or Prevent It!
Buy Now

Tailgating means following the driver in front of you so closely that you can even read the directions off their GPS device. This could be the number one cause of vehicle accidents because the cars are too close to each other and there is no room for stopping during an emergency. In fact, the tailgater is more at risk at being trapped in between the two vehicles. Always create some space between you and other drivers. There should be at least two cars' space between you and the car in front of you. The faster the speed you are travelling at, the further the distance should be.

This is a bad behaviour that is not only dangerous but also shows lack of respect for other road users. You can't say "Excuse me, I need to make a smooth curve turn here...", so don't cut corners when turning.

People have been caught drinking coffee, having their breakfast with a bowl of cereal on their laps while driving, or holding a Big Mac with one hand while the other hand is doing all the driving. Sounds similar to texting while driving, doesn't it? Have they thought about the consequences of spilling hot coffee on their laps while going at 100kph on the freeway? The point is, both hands should be on the steering wheel and eyes on the road when you are driving.

I won't even think about putting on makeup in a moving car or try to multi-task while driving. I have seen women applying their makeup while driving. Who are they going to blame if that eyeliner pencil get lodged into their eye socket because a car cut into their lane?

Inappropriate Use of the Horn

The horn should be used to warn other drivers in danger of an emergency, like when another driver is unaware of you approaching when he/she is changing lanes or reversing. Some drivers like to honk at cars that are signalling and slowing down to make a turn. What is their point? Are they saying "Hey slowcoach, hurry up and get off my lane!" or could it be "Thank you for letting me know you are turning left"? Using the horn without any valid reason could cause annoyance to other road users or even encourage road rage.