Denny Hamlin is Wrong, Even When He's Right

Once again, Denny Hamlin's comments off the track gained him more attention than his performance on it. Before it was over fairly innocuous comments on the early performance of NASCAR's new Gen 6 car. Now, however, he's made himself wrong by being right. His pre-race tweet and later on-camera comments regarding Kyle Petty only shine a spotlight on just how frustrating a season 2013 has been for the Fed Ex team. Hamlin would do himself a service by learning to let go- or at least let his car do the talking for the immediate future.

For those who missed them, here's what Kyle Petty had to say before Sunday's race:

That didn't sit well with Hamlin. Before the green flag fell at Pocono, he'd tweeted out his opinion, calling Petty a, “moron.” After crashing out of the race, he took it a step further, calling Petty out of touch with the sport he covered. Which was bad enough. But he then took it a step further, inferring that Petty's place in the sport came about only due to his last name.

Get Your Denny Hamlin Gear! 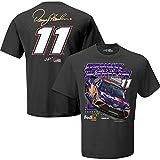 Petty In The Garage

The issues between Denny Hamlin and Kyle Petty go further than the normal give and take between athlete and media member. Back in 2007, when Petty was still an active competitor, he and Hamlin had a run-in at the 2007 Dover fall race resulting in a verbal assault by Petty. One thing we've learned by now is that drivers never forget. So you can bet that Petty is enjoying watching Hamlin get cut down a notch this year. And you can bet that Hamlin enjoyed watching the criticism Petty has taken over the years and in delivering his “moron” blast.

Petty on Wreck With Hamlin in 2007

Petty During His On-Track Days

Neither man is going to come out of this smelling like a winner. Petty is already wildly unpopular with a large portion of the NASCAR fanbase and many of them already consider him Dale Earnhardt Jr. Version 1.0; a man who won a few races but who never truly earned what he had in the sport and spent a lifetime trading on the accomplishments of his father. Hamlin is going through the most frustrating season of his career, with physical injuries added to the insult of being non-competitive for the first time in his NASCAR career.

Hamlin wasn't technically wrong when he said that he and Petty arrived in NASCAR through vastly different routes. Kyle Petty never measured up to the accomplishments of Richard Petty. That no one outside of Dale Earnhardt Sr. has measured up to those accomplishments is irrelevant. He's a Petty and was supposed to carry on the Petty legacy built by Lee and expanded by Richard. Instead, he won eight races over 30 years. He never finished above fifth in the points. Perhaps most damningly, his failure to be competitive at the end doomed Petty Enterprises and forced the King into a series of partnerships that only recently brought him back to influence in his own organization.

But being right in this case doesn't matter. What does Hamlin gain by bashing Petty? Kyle is a third string announcer on a third string network. Only a handful of people actually saw his comments and even fewer cared about them. Twitter only picked up the story when Hamlin fired back with his “moron” tweet. Major news organizations such as USA Today and ESPN then ran with the story after Hamlin's post-race diatribe. In other words, Hamlin once again brought all of this onto himself. Once again he made himself into the story and once again it comes after a difficult performance on the track.

Over the past two weeks, the calls for Hamlin to get out of the car and to undergo major back surgery have grown louder. Hamlin himself admits that 2013 is a lost cause and noted that he and crew chief Darian Grubb have experimented with a variety of setups trying to lay the foundation for next year. If that's the case, the argument goes, why continue to risk major injury in 2013? Why keep getting in the car when there's little to gain and so much to potentially lose? After all, Junior stepped out of the 88 last year over injury concerns and that was during the Chase. This wouldn't be the first time a driver was forced to the sidelines by injury. Moreover, surgery now would enable Hamlin the maximum recovery time and ensure his ability to be full throttle come Daytona next year.

I'm not a doctor. I don't know what the medical issues involved are. As long as Hamlin is medically cleared to get in the car, however, he has every right to do so. Given both his return this year and his prior return after knee surgery (and subsequent success), he's earned the right to sit in that seat. Whether or not he should is a matter that certainly will be much discussed over at Joe Gibbs Racing as the 2013 season grinds onward.

Hamlin and Logano In Better Times

One thing that isn't up for discussion is Hamlin's need to find a way to control his temper. For all of Kyle Busch's celebrated blow ups (and they are many), Hamlin has become the biggest headache at JGR. His injury came about in large part because of feud with Joey Logano; the last-lap crash at Fontana might well not have happened had either racer had an ounce of respect for the other. He's had past run ins with multiple other drivers in the garage. And his 2013 season is already an exercise in futility despite being only just past the halfway point.

Unless Hamlin makes changes in how he reacts to his environment, the potential exists for a much larger meltdown in the weeks ahead. His over-reaction at Pocono showed that the strain is clearly building. He's buckled in the past, reacting badly to pressure applied by Jimmie Johnson and Kevin Harvick in the 2010 title chase. At the time, his feud with Brad Keselowski was taken by many to show just how far Brad had to go. Looking back, maybe Denny was the one who still wasn't there yet, no matter how well he was doing on the track.

And the latest blow up won't help. No matter how right Denny is on Kyle Petty, he's wrong. He may not draw a fine from NASCAR this time around but all he accomplished was a 43rd place finish at Pocono and to cause observers to ask whether or not Denny should step away. Instead of talking about what they're building for 2014, JGR must now answer questions about how they've handled 2013. For the second time this season, Petty gains headlines for his pre-race comments. If Denny is to become the champion he sees himself to be, he needs to recognize that sometimes even when you're right, you're wrong.

Now It's Your Turn

How should Denny Hamlin have responded to Kyle Petty's pre-race comments?

Second Poll: Who Was Right?

EDIT: Several of the commenters have noted that Kyle Petty isn't universally hated by NASCAR fans. He's done a world of good through his Victory Junction Gang camp and unlike many other commentators, isn't afraid to speak when he feels the situation warrants it. Given his 30+ years in the sport both behind the wheel and behind the microphone, he has a wealth of experience in the sport and he speaks for many who feel NASCAR has lost touch with his roots. So I wanted to add a second poll to see what you think; was it Kyle or Denny in the wrong here?

Now It's Your Turn, Part II

Was Kyle Petty right in his criticism of Denny Hamlin?