Driving in Indonesia: Unwritten Rules of the Road

Howard lived and worked for 20 years in remote parts of Indonesia and the Philippines.

I lived for many years in Indonesia and learned the driving customs of the region. Being also a keen observer of human behavior, I often contemplated the reasons behind the rules of the road, many of which were not only unwritten, but contrary to official regulations. This is a compilation of some of the most obvious or more humorous customs.

The path concept is a theory I developed to help me in Indonesia. There are paths everywhere, and people walk in the center of a path, not at the edge. Roads are simply big paths, and that is exactly how they are treated. A vehicle has the whole road to itself—the center, of course—until it needs to edge over to the left to make way for another vehicle.

Traffic officially drives on the left. Try to remember that if you naturally drive on the right. The right-of-way goes to the larger vehicle. This becomes painfully obvious if you’re in the smaller vehicle and forget.

He who honks first has the right-of-way, especially if he’s going faster or driving a truck. Official vehicles trump this rule of the road; they always have the right-of-way, which is true even when you’re parked.

When you get your Indonesian driver’s license, it is the proctor’s job to ensure that you mark the correct answers on the written exam. This is especially helpful on the English version. It resembles one from the USA, but translated back and forth too many times, so that some previously wrong answers are now correct, etc. Try to get the Indonesian version if you can; at least that one's grammatically correct. When doing business in Indonesia, just remember that the proctor knows the right answers, so do as he says.

If they impose a cone-weaving test for you to demonstrate your motorcycle balancing skills, it may very well be impassable. Cones set one meter apart are impossible. If, after a few attempts, you reach an impasse with the test administrator, ask him respectfully to demonstrate. He will impassively pass you.

Driver licenses and vehicle registration in Indonesia must be renewed periodically or whenever there is an enforcement crackdown. The latter inconvenience can be avoided by registering a vehicle in a different province from where it is driven. No local authority is responsible for an out-of-date plate that comes from elsewhere. And the other province never sees the vehicle. If questioned, the unwritten rule is for neither party to put the other person in the embarrassing position of losing face.

Roadmap for Driving in Indonesia 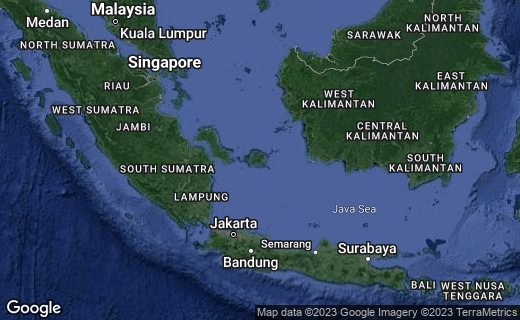 Watch the Rules of the Road

Where have you encountered unwritten rules of the road?

The proper way for a female to ride on the back of a motorcycle is to perch side-saddle. And if the driver is male, don't even think about hanging onto him for support!

When passing any military post, reduce your speed and, if on a motorcycle, take off your sunglasses. Don’t look at them or do anything there that might call attention to your vehicle. Don’t use the horn, stop for a passenger or pass another vehicle. The driving rule here is to be utterly respectful, if not entirely invisible.

Commercial fares for transporting passengers and cargo should only cover vehicle operating costs. The vehicle was originally purchased through some sort of windfall, and its replacement will come the same way—hopefully. With margins that slim, the registered gross vehicle weight (GVW) must be exceeded before any trip can begin. The more passengers and cargo that can be stuffed into and onto the vehicle, the more bonus the driver and conductor receive. Conductors on minibuses will make change for a larger bill; taxi drivers won’t.

The passenger’s bucket seat in a minibus can accommodate two people, or you can replace it with a wooden plank to accommodate three. The guy next to the driver may need to spread his knees when the driver needs to shift gears. The front seat is more honorable, so others will defer to foreigners and those of wealth or influence. If that so happens to juxtapose a man and woman too closely, passengers with moral scruples should begin to mumble, grumble, hem and haw.

In case of accident

If an accident occurs, the gathering crowd should immediately stone the driver before he can escape. Stone all the drivers just to be sure. This is especially important if someone was injured. This is the unwritten rule; the official regulation differs.

The driver in any accident must flee the scene and seek asylum at the nearest police station. This is for his own protection, until the police can calm bystanders and demonstrate some semblance of control.

Should an accident ever occur while driving in Indonesia, it is the person with the most money who should pay. That’s you, of course, since you’re a foreigner and foreigners are by definition more affluent.

If there is oncoming traffic in your lane with another vehicle in the other lane, go faster to see if you can beat it. If that doesn’t work, and you were overtaking a vehicle, swerve to the right-hand shoulder. Maybe you can get around the other car that way if he stays in his own lane. If not, it was the will of Allah.

Disclaimer for my Indonesian friends: The rules of the road described here are anecdotal and in no way formalized. Some may be followed by nearly everyone, while others are based on isolated incidents. Before you attempt to apply any of them in practice, you should confirm them with locals whose experience driving in Indonesia is more current and authoritative than mine.