After a strong fifth place run at his home track in Atlanta, Chase Elliott is in command of the Nationwide points standings, fifteen points ahead of teammate Regan Smith. In his first full season in any of NASCAR's three top series, the 18 year old phenom has three wins and 11 top five finishes in 24 races. Moreover, he's run with an amazing degree of poise and car control with a level of skill many veterans never master. Yet unless he steps outside of the protective Hendrick Motorsports umbrella, Chase's Sprint Cup ride may be a long while coming.

Coming into 2014, the succession plan seemed obvious. Hendrick would let Elliott drive at the Nationwide level for two to three years, adding stock car experience to his obvious potential. The team could also begin running Elliott at selected Sprint Cup races over that time but with Hendrick already at NASCAR's four team limit, there would be no full time ride. Yet with three of the team's four drivers at or above age 40, the likelihood was that there would be room for Chase when the time came.

But with 2014's regular season approaching its end, several things have changed rendering those plans useless. The first has been the career revivals of both Jeff Gordon and Dale Earnhardt Jr. Instead of talking retirement, those two drivers sit atop the Sprint Cup standings. Each have three wins and more than 15 top ten finishes. Both have brought new sponsors to the Hendrick fold and both remain under contract through at least 2017. Meanwhile, Jimmie Johnson remains Jimmie Johnson; a six time Sprint Cup champion who wants to top both Earnhardt Sr. and the King's record of seven. That means at least two more seasons at minimum.

And Chase Elliott is simply too good to hide away at the Nationwide level until 2018. His wins this year include trophies at Texas, Darlington, and Chicago. He's also got a runner-up finish at Richmond and top fives at tracks ranging from Bristol to Dover to Mid-Ohio. This isn't a driver who's gotten lucky at a single track type that suits his temperament. This is a driver coming of age as we look on. Without question, every other owner (outside of Gibbs, that is) in the Race Team Alliance is looking at Elliott and wondering how they might be able to bring Chase aboard.

The situation is eerily similar to that of a few years ago for Hendrick. JR Motorsports brought Brad Keselowski aboard in mid-2007. He became a Hendrick driver the following year when Earnhardt signed with the mega-team. Rick loaned Brad out to satellite team Phoenix for a few events in a Cup car while Brad learned the stock car racing trade weekly on the Nationwide level. The thought seemed to be that Keselowski would need some seasoning before he'd be ready to drive Cup full time (replacing Mark Martin).

That script went up in ashes when Keselowski became too hot too soon. He captured a Cup win at Talladega (launching Carl Edwards airborne in the process). Even more importantly, he won six Nationwide races in two years along with 33 top five finishes. He landed third in points both seasons- a feat even more impressive when you consider this was before Cup drivers were prohibited from winning Nationwide championships. Martin wasn't quite ready to hang it up yet and Hendrick couldn't keep Keselowski any longer.

The loss of Keselowski to Penske Racing wasn't seen as that big a deal at the time; Hendrick himself was quoted at the time as saying Brad would, “Never be so far away that I can't reach him.” Privately, many wondered just how combustible things might turn out to be with two noted hotheads in Keselowski and teammate Kurt Busch. Penske had never won a Cup championship and it was hard to see how “Bad Brad” would make much of a difference. Why not let him go tear up someone else's race cars learning his trade? Hendrick could always sign him back down the road if he ever lived up to his talent.

Missed out at the time? Get the 2012 championship gear at Amazon! 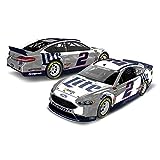 The reality turned out to be quite different. Keselowski won championships at both the Nationwide and Sprint Cup levels, the first for Penske. While he's had a number of feuds in the past five years, he's also matured as both a driver and as a person. He's become one of the faces of the sport and he's become synonymous with sponsor Miller Lite after his epic championship celebration on Sportscenter. Hendrick Motorsports let him get away because they had no ride to offer him.

Five years later, the Keselowski example has to be on Mr. H's mind. Of his four drivers, the one who would seemingly be on the shortest leash is Kasey Kahne, whose contract ends after the 2015 season. Yet Kahne just won this past weekend in Atlanta and is still relatively young himself. Hendrick brought Kasey aboard with an eye toward the long term and has pitched him as such to sponsors. Yet if he doesn't open up the #5 car, Elliott will undoubtedly sign elsewhere. There simply isn't any other choice unless Gordon retires.

So Mr. Hendrick will have a difficult choice to make. Does he give up a proven commodity in Kahne for an unproven one (no matter how talented) in Elliott? Kahne likely has hit the ceiling of his talent as a driver. He will win a couple of races and put his car in the Chase conversation. He will race his peers cleanly and he will represent the company well at all times. He's a driver that would be welcome at any racing operation in the sport.

What should Hendrick Motorsports do about Chase Elliott?