September has arrived and so has the end of NASCAR's regular season with Saturday night's Federated Auto Parts 400 in the Virginia capital. At 0.75 miles in length, Richmond has the urgency of a short track. A poor qualifying effort or mistake on pit lane will put cars in danger of quickly falling a lap down. Yet the track is relatively wide and cars can pass either low or high depending on the individual setup in question. The result is often a series of long green flag runs punctuated by groups of cautions. With so many teams on the outside looking in, tempers will be short and the action should be good as NASCAR's race to the Chase comes to a close.

Before going any further, a quick note. We'll be looking at the statistics over the past ten races, all courtesy of racing-reference.com. Going any further back takes us into fourth generation cars and a completely different race environment in terms of competition on the track. We're also in no way advocating gambling in any way shape or form. These odds are purely for informational purposes only. Like a racer 28 points out of the Chase let's throw caution to the wind and take a look at who will bring home the checkered flag and end the regular season on a high note.

Busch fans, get your shirts on Amazon! 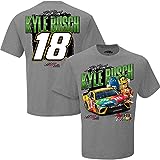 Won last week's race? Check. Won four of the last ten events in Richmond? Also check. He also has an average finish of 7.2 (second best overall), six top five finishes and has led nearly 16% of the laps he's run. Just as important, Busch doesn't have a single DNF here during that timeframe. He's on an emotional high after the Atlanta win and without question he wants to tie teammate Matt Kenseth with five wins going into the Chase. Odds are he gets it here.

Harvick has won two of the last ten races at Richmond including the race there earlier this year. Like Busch, he has seven top tens during that timeframe. He's locked into both the Chase and the top ten so he has absolutely nothing to lose in going for broke in this race. Given his past history with Rowdy Busch, there's also no doubt he'd thoroughly enjoy denying Kyle the victory so a bump and run isn't out of the question.

Bowyer is the defending champion of the Richmond fall race. He's also never finished lower than seventh in an MWR car at the track. The team gambled and lost with its Atlanta engine package and Bowyer got the chance to kick back and enjoy an adult beverage long before the checkered flag flew. Engines won't be a concern here and the team will want to start Clint off on the right foot heading into the Chase.

This is likely the first time Hamlin can be considered anything but a favorite at Richmond. He's won two of the last nine races (missed the spring race due to injury) and scored five top five finishes during those events. He's also led 942 laps (over 26%), more than 300 laps above the next closest competitor. But Hamlin is this year's shining example of how important luck is in auto racing and the only kind he's had is bad luck. If his luck is even average he could dominate Saturday night. If not? What's one more DNF in a season filled with them?

Martin has always had speed at the Virginia short track. He has two pole starts in the last ten races there but the finishes haven't quite matched up. Still, he'll be pulling a Hendrick car there for the first time since 2011; in that year he scored top five finishes in both Richmond races. With those poles and four top five finishes, this may be the place where Martin makes a splash for SHR.

Johnson isn't exactly on a hot streak pulling into Richmond. But it's worth noting that the Hendrick teams tested here not too long ago and Jimmie is still a five time champion with a win and five top ten finishes over the last ten races here. His recent struggles have been luck, not speed related. While so many others need a solid finish to make the Chase, Jimmie is already locked in and like Busch can afford to take a chance should the race develop into a strategy or fuel mileage challenge.

Thanks to a pair of poor races, Menard is now officially out of Chase contention at 61 points back. It's theoretically possible that if he were to win the race, Kahne get into the top ten and all of the other race winners crash early for Menard to slip by. But that's not going to happen at Richmond. Menard hasn't led a lap in the last ten races and in fact has only finished on the lead lap twice despite finishing all ten races. He's never had speed here before and there's no reason to believe that will change now.

Aside from a seventh place finish in 2010, Truex hasn't finished inside the top 15 at Richmond over the last ten races. He's led a total of 20 laps in the last four years (1600 laps run during those events). His average finish of 22.6 is over seven spots lower than his average starts, one of the worst figures in the starting field. With a broken wrist, Truex is clinging to the second wild card spot yet this is perhaps the worst possible track for him to try and do it at. If Truex makes the Chase, it will be thanks to his year to date results, not a Richmond win.

The track doesn't favor another MWR racer, Vickers. Brian has run seven of the last ten Richmond races but only one of those races took place for a non-Red Bull team. So the results may be a factor of the team he ran for and not his true talent. But those results showed Vickers dropping more spots during the race than anyone not named David Stremme (8.9 positions per race). He had a mediocre run in the #11 filling in for Hamlin earlier this year, a team that's won multiple races at the track. He needs the seat time to prepare for next year but don't expect much this weekend from Vickers.

Who will win Saturday night's Federated Auto Parts 400 at Richmond?