Fantasy win odds for the Sylvania 300 in New Hampshire

After a marathon of a day to kick off the Chase, NASCAR's teams pull into Loudon, New Hampshire for this weekend's Sylvania 300. The one mile flat track offers a very different race than the intermediate tracks that make up half the Chase field. It also provides much closer action and virtually no chance of expired engines (something that has to have every team breathing easier after last weekend). For some teams, New Hampshire is a chance to separate themselves from the rest of the Chase field. For others, it may well be their last chance to be relevant in NASCAR's playoffs- a short end after the chaos that fell for many trying to get into the Chase.

Before going any further, a quick note. We'll be looking at the statistics over the past ten races, all courtesy of racing-reference.com. Going any further back takes us into fourth generation cars and a completely different race environment in terms of competition on the track. We're also in no way advocating gambling in any way shape or form. These odds are purely for informational purposes only. Let's take a look at how last year's race ended.

Slump? What slump? While Johnson didn't pull out the victory at Chicago, his top ten finish proved that when the bright lights come on the #48 team is ready. They have an outstanding record at virtually all of the Chase tracks and New Hampshire is no exception. He has one win, five top five, and eight top ten finishes in the last 10 races here. He has the second highest average finish at 7.9 (which is almost nine spots above his average start) and led nearly 8% of the laps run. He also has the benefit of having a pair of teammates who also run well at New Hampshire, a major bonus when searching for the right setup on race weekend.

At a finish of 12.4, Biffle has a solid average finish and one of the best this side of Hendrick Motorsports. He's been steady over that period, scoring a win and four top ten finishes. The only concern is that Biffle hasn't led a lot of laps at the track. He'll need to get up front early and stay there with so many Chasers doing well here before. The Ford performance issues shouldn't hold him back; handling is far more important than horsepower at the one mile flat track.

As noted earlier, Hendrick has been strong at New Hampshire and Gordon is no exception. In fact, at 7.5 he has the best average finish of any driver over the last ten events here. Oddly enough, despite seven top ten finishes he doesn't have a win (an issue that has plagued him all season long). A good result in qualifying will go a long way for Gordon. His team cannot afford to spend the first half of the race looking for speed given their current points position.

Although Hamlin's season is slowing dribbling out to its conclusion, New Hampshire is the one place this side of Martinsville where Hamlin may yet pull out a win this year. He has the best average finish of any non-Chase driver at 9.8. He's led a staggering 12.3% of the laps run during that time frame, far and away the best of any driver starting Sunday. And he has a win with five top five finishes. Hamlin seems to thrive on these low-banked tracks; while a win won't save his season, it certainly will make it more bearable. If he can avoid the kind of bad luck that's followed him so far in 2013, he may well get that win in New Hampshire.

While the 2012 Chase is nothing more than a memory for the defending champion, he still has nine more races to prove his team is still among NASCAR's best. New Hampshire provides him a near-perfect opportunity to do it. He's run eight races at the track and finished in the top ten in five of those events. While he hasn't won here yet, it hasn't been from lack of speed. He has the second highest average finish of any non-Chaser (and higher than some Chasers) at 12.8. Like Hamlin, 2013 hasn't been kind to Keselowski and getting a win will make those struggles a bit more palatable.

Driving for any other team, Earnhardt would likely be that organizations standard bearer coming into New Hampshire. Like Keselowski, he sports an average finish of 12.8 at New Hampshire over the past ten events. He also has four top tens and has ended his day on the lead lap in nine of those ten events. What makes those finishes even more impressive is when you consider how much the #88 struggled in 2010 and 2011. He knows how to make speed in Loudon and he's surrounded by teammates that do likewise. While it's not Talladega (or Michigan), New Hampshire is quietly a track Earnhardt knows well and should be in contention for a win at.

Despite running in equipment that at worst has been mid-pack, Menard has failed to score a top ten finish or lead a lap in the last ten events at New Hampshire. His average finish of 23.1 is over five spots below where he's qualified and is the worst of any driver with more than two starts in a ride planning to run the whole race. He may benefit from sharing information with Kurt Busch and Kevin Harvick, two drivers who have combined for much better results. But with both of those drivers on their way out, it's unlikely Menard will gain enough to improve his finish on Sunday.

Ambrose is another driver who has had little over the last ten events here. He's run nine of those races and has a single top ten finish and six laps led to show for it. Part of the problem has been his qualifying efforts; Ambrose has averaged a start of 21.9 on the flat track (and finished at roughly the same place). If the team can find enough speed to qualify the #9 in the top ten, Ambrose has the ability to keep his car there. If not, it may be another long New England day for the Tasmanian.

Yes, Matt Kenseth has won six races this season. Yes, two of those wins have come in the last month and where he hasn't won, teammate and fellow Chaser Kyle Busch probably has. But New Hampshire has not been kind to Kenseth of late. Over the last ten races he has only two top ten finishes and 34 laps led. It hasn't been due to luck; he's finished on the lead lap in eight of those ten races. He simply has unloaded with little speed (qualifying at 24.7) and struggled all weekend to catch up to the faster cars. His best hope for Sunday lies in the fact that he's no longer with the team that unloaded most of those cars. The Sylvania 300 will be a true test of just much momentum means in auto racing, particularly if Kenseth forgets his own history and wins the race. 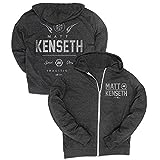