Marcos Ambrose announced on Saturday that he would not be returning to NASCAR in 2015, opening up a competitive Sprint Cup ride for next season. RPM has already indicated that they plan on running Ambrose's #9 car full time next year. The team faces an interesting decision. They could go with a veteran hand, someone who understands how to get speed out of the car and generally brings the chassis home in one piece. On the other hand, they could choose to get behind an up-and-coming driver- someone who could be a boon to the company or a bust on the track. Which way will the King go? Another Left Turn looks at five possible options.

Like many other companies, NASCAR teams generally want to promote from within where possible. So if RPM decides to do so with the #9 car, Dakoda Armstrong is the logical choice. Armstrong is in his first season running the team's #43 Nationwide car. It's also Armstrong's first full time Nationwide season after completing his first Camping World Truck season in 2013. While Dakoda hasn't set the world on fire, he's shown glimpses of his ability with top ten finishes at Mid Ohio and Richmond.

To be fair, Armstrong probably isn't ready for a full time Sprint Cup season right now. He ran a single full season in the trucks (plus parts of two others) and has yet to finish his first Nationwide season. Rushing drivers to the Cup car before they're ready can sometimes do more harm than good. But at 23 years of age, his best NASCAR seasons are undoubtedly ahead. If RPM truly views Armstrong as a future Sprint Cup driver, they may as well find out what they have and let him learn his trade sooner rather than later. 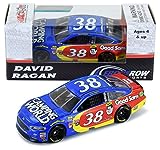 Early speculation has already placed Ragan as one of the most likely drivers to take over Ambrose's team. He's a long-time Ford driver so he's a familiar face to the manufacturer and the engine department. He's also a former Roush Fenway Racing driver and RFR provides equipment and technical support to the Petty team. He's a comfortable choice to all involved as Ragan will not make waves, be competitive most weekends and a threat to win at the plate tracks.

It's also worth noting that despite his extensive Sprint Cup experience, Ragan is still relatively young. He will be 29 in December yet is in his eighth season as a full time Cup driver. His time at RFR was not as successful as the team had hoped but following Mark Martin was a thankless task for any driver- much less someone in their early 20's still learning their trade as a stock car racer. Ragan is one of the few drivers available who combines both veteran experience and a youth that a team and sponsor can build a future with.

Hornish would make a very interesting choice for Richard Petty Motorsports. He hasn't run full time at the Sprint Cup since replacing AJ Allmendinger at Penske Racing in 2012 (and was subsequently replaced by Joey Logano at season's end). He finished second in the Nationwide season standings a year ago yet wasn't able to find a ride at any NASCAR level this year. His three year stint as a Penske cup driver between 2008-2010 led to a lot of wrecked race cars and angry fellow drivers. Why bring aboard a 35 year old driver with that track record?

What makes Hornish attractive is that he appears to have turned the corner as a stock car racer. Yes, he struggled early in transitioning from open wheel racing to NASCAR. But the reputation doesn't match the recent results. In his last 73 Nationwide races (2012-14), Hornish has only four DNFs and all were a result of engine or car failure. He has four top five finishes in seven Nationwide events this year after 16 (and a win) a season ago. His release from Penske Racing came not because of a lack of talent or poor results but a numbers game that we looked at a year ago (Up or out: The dilemma facing Sam Hornish Jr.). If RPM wants a driver at the top of his game, Hornish may well be the best available person for the job.

Hornish pulls out a Nationwide win at Iowa Speedway

Smith's performance for JR Motorsports over the past two years has proven that he deserves another chance at the Sprint Cup level. He has three wins and 41 top ten finishes in 59 races plus another win in his sole 2012 race for the team. He finished third in points a year ago and is a title contender again this year. For the first time in his career, Smith is in equipment equal to the rest of the field and his talent is shining through.

Regan also has a number of things working in his favor. At 30 years of age, Regan is an excellent blend of racing experience and good years ahead. His 2011 Southern 500 win at Darlington remains the sole win for Furniture Row Racing. He's also been the go-to guy for Sprint Cup teams needing someone to step in right away, replacing Dale Earnhardt Jr. and Tony Stewart in spot events over the past two years. The only drawback may be that Smith is a long-time Team Chevy driver. Yet the manufacturer has no obvious openings at the Cup level and Regan may well decide that a chance to step back up is worth the change.

While Stenhouse is under contract with RFR and sponsored through 2015, it would not be impossible to see him move to RPM next season. After winning back to back Nationwide titles in 2011-12, Stenhouse's Cup career to date has to be classified as a disappointment. He finished a distant 19th in points last year and has regressed this year. His average finish has dropped from 18.9 to 22.6, landing on the lead lap of only 11 of the 26 regular season events. Roush has a lot invested in Stenhouse but at some point the results have to justify that investment.

The movement of Stenhouse to RPM could be done in a number of different ways that protect RFR's long term investment. The team has essentially loaned out Trevor Bayne to the Wood Brothers since 2011. Bayne will run full time for RFR next year and will benefit from the experience he gained running for the fellow Ford team. Roush could reach a similar agreement with RPM, giving Stenhouse a chance to prove himself while not directly risking RFR equipment and results. Moreover, sometimes a change in teams is exactly what a young driver needs to find themselves (see Logano, Joey) and break the burden of high expectations.

What kind of driver should RPM pick to replace Ambrose in 2015?