How to Jumpstart a Car

Knowing how to jumpstart a car safely will help you out — or help you assist someone else — during a dead-battery emergency. And save you time and money. It'll get you back on the road and on your way to school, work, or even to the car shop if necessary.

Many unexpected situations may lead to a dead battery: leaving the headlights on overnight; problems with the charging system; a short circuit; a parasitic drain, or car battery issues. Any of these problems can strike anytime and leave you stranded.

The jumpstarting procedure has very few steps, but doing it safely is another matter. And safety is the most important part here. You can seriously injure yourself, damage sensitive components on your car or on the car jumpstarting yours, if you are not careful.

Preparing to Jumpstart a Car

Before attempting to jumpstart your vehicle, check your car owner's manual and look for any jumpstarting advice or warnings:

* Do you need to take any specific steps before attempting to jumpstart your car?

* Do you need to find the location of the battery terminals under the hood, if your battery is located somewhere else in your vehicle?

* Are you allowed to jumpstart your car at all?

Then, check that your battery connections are free of corrosion and properly connected. Corrosion and loose connections will prevent the battery from getting charged and powering the car electrical systems.

To get rid of corrosion, clean the battery connections using a mixture of one tablespoon of baking soda and 8 ounces of warm water. Apply the solution using a soft brush and thoroughly clean the terminals and battery posts.

1. Park the car with the helper battery facing the dead car. But don't let the cars come in contact. Just leave enough room to walk between the two cars.

3. Engage the parking brake on both vehicles and leave the engines off.

4. Turn off all electrical accessories.

5. In the car with the dead battery, though, turn on the blower motor, if it has one. This will prevent a dangerous electrical surge from damaging the computer or sensible electrical equipment during the jumpstart, specially on cars with electronic ignition or hybrid engines.

Before you start, make sure the clips on the jumper cables DO NOT touch each other as you begin to connect each one to the batteries and ground. This will prevent creating any sparks and damage to sensible electronic equipment in either vehicle.

1. Open the hood on both vehicles and connect one end of the red jumper cable to the positive terminal on the dead battery. You will see a positive (+) sign next to the terminal.

2. Hook the other end of the red cable to the positive terminal of the helper battery.

3. Now, on the helper battery, connect the black jumper cable to the negative terminal (the one with the (-) sign next to it).

4. Then, connect the other end of the black cable to an unpainted metal surface on the dead engine. You can connect to an engine bolt, or the support bracket for the alternator or steering pump. Choose a spot as far away from the dead battery as possible.

The chemical reaction of the acid inside a car's battery produces hydrogen gas. Connecting the black cable to a good ground on the dead engine will prevent a potential spark from reaching and igniting the highly flammable gas, which can blow up the battery and cause a serious accident.

5. Keep the jumper cables away of moving engine parts like fans, pulleys and belts.

Now you are ready to jump-start the vehicle.

1. Start the engine of the car with the booster battery and slightly depress the accelerator so the engine runs at a speed higher than idle.

2. Now, start the vehicle with the dead battery. If the dead battery is in good condition and the jumper cable clips are making good contact, the engine should start at the first or second attempt.

WARNING! As soon as the dead car starts, unplug the black jumper cable from ground on the previously dead car. Leaving the jumper cables connected will damage both batteries and even cause an explosion. Then proceed to disconnect the other cables following the reverse order.

5. Disconnect the black cable from the previously dead car.

6. Disconnect the other end of the black cable from the car with the helper battery.

7. Disconnect the red cable from the helper battery.

8. Disconnect the other end of the red cable from the previously dead car.

9. Turn off the blower motor in the car with the previously dead battery, and, unless your car owner's manual says otherwise, disconnect the jumper cable in the following order, but don't let the clips touch each other while the cable is still connected.

10. On the previously dead car, don't turn on any electrical switches at this time. Allow the engine to run for at least 15 minutes so the alternator recharges the battery. Better yet, go for a short drive to improve battery charge.

If you need to jumpstart the vehicle again after shutting off the engine, you may have a bad battery or problems with the charging system in your vehicle.

WARNING! Always disconnect the jumper cables as soon as the dead car starts to prevent an explosion.

Knowing how to jumpstart a car safely will help you get it back on the road in a matter of minutes without having to wait for someone else that knows how to do it, or wait for emergency road service. You don't own a set a jumper cables yet? Buy a good pair and keep them in the trunk. A 10-feet long, six gauge set will be good enough for most jumpstarting situations. You can buy a good set of jumper cables for about $20 dllrs. That way, whenever you need a jumpstart, you'll only need the help from a willing driver; and you'll be prepared to help another driver in need of a jumpstart as well. And just in case, print out this guide and keep it handy in your glove compartment for reference during an emergency. 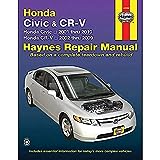 Honda Civic 2001-2010 & CRV 2002-2009 (Haynes Repair Manual)
Haynes manuals are written specifically for the do-it-yourselfer, yet are complete enough to be used by professional mechanics. Since 1960 Haynes has produced manuals written from hands-on experience based on a vehicle teardown with hundreds of photos and illustrations, making Haynes the world leader in automotive repair information.
Buy Now

How Much You Know About Jumpstarting a Car?