Here is one particular case of malfunctioning car alarm: A Toyota corolla car was brought to our shop because its alarm is not anymore functioning.There are many causes why alarm would not work, and in this case the problem is blown fuse. I took pictures of the steps I did to trace the problem to have a clearer presentation of how to do it, so that anyone with the same problem will be guided in fixing it by himself. I divided the steps into two: clearing off the working area and the actual replacing of the blown fuse.

The pictured car above is the car which I am referring here with a malfunctioning alarm.The driver complained that alarm would not work by remote control; there is no chirp of siren, nor powered locks are actuating. This model does not have an alarm originally equipped from the manufacturing company, thus the installed alarm in this car was optionally installed by the owner.

Clearing off the working area

The latest versions of cars nowadays mostly have built-in car alarm, and it is placed securely that you have to find deeper in the car to find its location. In most cases, an alarm that is optionally installed by the owner has to be placed left side on the car wall, underneath the dashboard and near to the clutch. In fixing alarm problem it is important to widen the working space near to this area, and this is the first step: adjust the driver seat far back to its limit; a wider and freer working space can make movement convenient and may hasten work as well.

Next, After having a wider working area, pull out the step board cover. This will lead to exposing the screwed bolt holding another cover under the dash board. The step board cover has plastic locks that are fitted into holes so that they would cling tight. To uncover the step board, stick a flat screw where these locks are and gently push them out of the hole. I have already done it in this case that is why in the picture I could already lift up the cover.

Now that the hidden screwed bolt is exposed, use philip screwdriver to loosen it, and find the other screwed bolts that are also hidden while some of them can be easily seen from the surface of the cover. In the picture, the cover has a small compartment where there are hidden screwed self- topping bolts. When all screw bolts are loosened, pull out the cover slowly; it still has hooks at the back that holds on the dashboard, so make sure to push it out upward so that these hooks would not cling to the holes of the dashboard frame while the cover is lifted out.

When the cover under the dashboard is pulled out, finding the car alarm module will be easier. In this case the alarm module was not hidden deeply, so I don’t have to look deeper in the car. A car alarm module is normally rectangular in shape and has socket connections with fuses connected along its line. The model of alarm installed in this car is “Rattlesnake”, and it has only one fuse. In some alarm model there are many fuses connected, the most important fuses among them is the fuse with live current, and another that is connected to "key on"-- the fuse that only have current when the ignition key is turned on.

The first step to do when the module is found is to look at the fuses. check if there are blown fuse, or fuses. Here, I looked at the fuse first and I immediately knew that it was blown out; blown out fuse can be easily noticed because the curbed wire inside it is cut. So I took out the blown fuse and replaced it with a new one I found from the fuse stock in our store. Upon replacement the module immediately sounded in ticking interval which is an indication that the alarm is activated. I knew that it would already work so I took the remote and tried locking and unlocking the doors. It was successful because the alarm went back to normal.

I hope this will help a lot for those car owners who have a malfunctioning car alarm. There are many possible causes for alarm problem maybe not the fuse, but at least in sharing this experience they now have one guide on how to fix it. 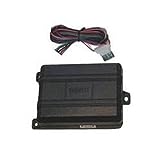