#IAmDale and the missing ingredient for Brad Keselowski

For NASCAR fans living under a rock, Spike TV aired its outstanding documentary “I am Dale Earnhardt” on Monday night. If you haven't yet watched it, do yourself a favor and block out an hour to do so (I also recommend reading Dale Jr's twitter timeline from Monday at the same time as it only makes the viewing experience even better). In watching the program, one of the many striking moments was just how similar Earnhardt was to the drivers of today. Turn away from the TV and the words of friends and family could easily be applied to another driver.

Except for that one missing ingredient, that is.

Watch "I Am Dale Earnhardt"

The early portion of the program spoke of Earnhardt's early success while angering half the field. His feuds with Darrell Waltrip and Geoff Bodine were touched on along with clips of Earnhardt deliberately wrecking both. As a Bodine fan, it was a reminder of just why I hated seeing that #3 car slide in behind the Levi Garrett #5. Dale seemed physically incapable of passing cleanly or so it seemed to a (completely biased) observer like myself. He didn't just want to win; all drivers like finishing first. He had a visceral need to win and woe be unto anyone who stood between Earnhardt and that goal.

Those words could be applied almost verbatim to Brad Keselowski. Like Earnhardt, he had a burst of success to begin his Cup career, winning the championship in only his third full season. But also like Earnhardt, he's been involved in countless feuds on the track during those early Cup years. Keselowski remains a polarizing figure in and outside of NASCAR. His contact with Jeff Gordon at Texas last year effectively eliminated Gordon from the Chase and sparked a near-riot on pit lane that left Keselowski with a bloody lip and a battered reputation. The incident came only a few weeks after he was attacked by Matt Kenseth after rough racing between the two at the Charlotte race.

Despite decades and a thousand miles separating their hometowns, Keselowski and Earnhardt have eerily similar backgrounds. They grew up in racing households (admittedly Ralph Earnhardt had more success than Bob Keselowski) where the track determined what kind of week would follow for the family. Times were hard and cash was short for both growing up. And both benefited hugely from the right person taking an interest in them at the right time. Ironically, the “right person” in Keselowski's case was Dale Earnhardt Junior, son of the late racing icon.

When you grow up at the lower end of middle class, you come to value success and the perks that come with it. You have a different perspective on what it means to achieve and you often have a different value system in what's worth giving up to get there. Deliberately wrecking a guy to move up one slot doesn't fly too well with your peers but then again, the Marquis of Queensbury was never a stock car driver. Playing fair helps your peers respect you but it isn't the fastest way to victory lane.

Yet that same respect is essential for long term success in NASCAR. Unlike most other sports, Cup drivers compete against the same people week in and week out over the course of a very long season. Angering multiple drivers is counter-productive in the long haul because your peers can make things much easier. They can bump draft you to the lead at Daytona and Talladega. They can move aside when you've got the faster car, enabling you to sustain momentum and keep moving toward the leader.

They can also make things far more difficult. With aerodynamics so critical in racing, a driver in front has a huge advantage on someone trying to make the pass. Despite a slower car, they can make their bumper seem like it's a mile wide. They can also hang you out to dry in the draft, sending that single car on a lonely ride to the back of the pack. Worse still, they can shorten any event with a well-placed fender. No man is an island and no car can long survive running with the field against them. Waltrip noted as much during the #IAmDale broadcast, saying that he never expected Earnhardt to have sustained success because of his style of racing. Many have said the same about Keselowski.

Get your own Dale Sr. window decal 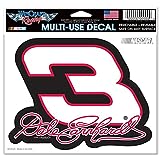 Yet that style of racing is frankly what brought both Earnhardt and Keselowski to the dance. Trying to turn off that aggressiveness would be a disservice to their teams and sponsors. Wrangler and GM Goodwrench didn't sign on to have the perfect pitchman. They hired their “One Tough Customer” to win races- and to stir up the pot while doing so. The same can be said for Miller Lite, who prior to sponsoring Keselowski had backed Rusty Wallace and Kurt Busch (neither of whom were known for a laid back style of racing). Most of all, they owe it to themselves to be who they are. Selling out would make for a significant competitive disadvantage.

So what's the difference? Why is Dale Earnhardt beloved and Brad Keselowski reviled? It isn't solely because Earnhardt died on the track; he was NASCAR's biggest driver at the time of his death despite a six year championship drought. It isn't simply because a black three is cool and a blue deuce isn't. Why is it that the fans who tag their bumper with a #3 sticker in 2015 aren't slapping on a #2 instead? If a hardscrabble upbringing, an unbending will to win and NASCAR success is what made Dale Earnhardt “The Intimidator”, why haven't the same traits made Keselowski his heir apparent.

The show's producers clearly knew that this comparison (and to a lesser extent, Kyle Busch) would be in the minds of some. They answered the question with what has so far been the missing ingredient for Keselowski. Humility.

In addition to his limitless talent and desire to win, Earnhardt also had way about putting past incidents behind both the wrecker and the wreckee. This wasn't something that came natural to Dale but was a part of his personality developed over a decade. Those interviewed for #IAmDale all touched on that fact. He would approach the guy he wrecked at the right time, put his arm around them and apologize for what happened. Instead of a half-hearted apology or a public “sorry if you were offended”, Earnhardt made genuine peace with the people he angered. His willingness to humble himself and accept responsibility made a real difference in how his peers and the public viewed him.

Meanwhile, Keselowski refuses to apologize for racing hard. He believes that everyone on that track shares his drive to win and he says that he would never expect someone to apologize for wrecking him when “racing hard”. What Brad fails to understand is that NASCAR is made up of all types. While every driver wants to win, not every driver weighs the risk/reward ratio the same way. Not every team supports (or can afford) a checkers or wreckers mentality. And not all fans view an apology as a sign of weakness.

Brad Keselowski is an immensely talented driver. He has a real opportunity to be the working man's champion for the next decade or more. His Homestead victory celebration remains one of my favorite moments ever as a NASCAR observer. For fans tired of the corporate spokesmean that most drivers have become, he is a breath of fresh air with the talent to make it stick. But until he finds that missing ingredient, he will never realize his full potential as a NASCAR driver- and the Cup series will be poorer because of it.

Could a driver who drove like Dale Earnhardt Sr. survive in today's NASCAR?