Lost in the hubbub of what did and didn't take place last Saturday in Richmond was the news that Jeff Burton would not return to drive the #31 car last year. The veteran driver is running his 20th season at NASCAR's Sprint Cup level and the 46 year old driver will move to an undisclosed team next year. With 21 wins and 134 top five finishes, Burton has quietly put together a career that many drivers wish they could call their own. No matter where Burton goes next season, the final ten races of 2013 likely represent Burton's last ride among racing's elite.

Like other veterans before him, Burton is moving aside thanks to a combination of young talent in the pipeline and declining results on the track. Richard Childress Racing has a pair of drivers vying for track time in the near future. Austin Dillon seems ready to go and will replace Kevin Harvick next year for RCR. His brother Ty is also showing signs of being ready to compete at the highest level and will get Austin's Nationwide ride next season.

Meanwhile, Burton has a step behind his peers the past three years. He has a combined six top five finishes over the last three years. He's led only a handful of laps the past two years and finished off the lead lap in more than half the races last season. The #31 averaged a finish of near 20th over the same time frame. The Childress engines may have had something to do with the results but Kevin Harvick has the same engines under his hood and he's managed to make the Chase with regularity- something Burton has done only once in the last five years.

So it's no real surprise that Childress is essentially firing Burton a year early to make room for Ryan Newman. Ryan may not have quite the same reputation in the garage that Burton has but he's won races and led laps. He also may be able to bring a sponsor or two with him as Quicken Loans and Outback Steakhouse both have invested real money in activating their Newman sponsorship. Even if not, Newman is ultimately more marketable for RCR than Burton. In an era where sponsors often dictate rides, that alone is enough to cost a driver their job.

It's never supposed to end this way for a hot-shot driver and so it is with Burton. He first came to prominence in NASCAR by winning the 1994 Rookie of the Year award (beating nine other drivers that included his brother, Ward Burton). He shook off some of his issues finishing races and moved to Roush Racing in 1996. The eight plus year partnership saw Burton win 17 races and four top five finishes in the season point standings. The peak was a two season stretch in 1999 and 2000 where Jeff won ten races, scored an amazing 36 top five finishes, and finish high in the points (fifth in '99 and third in '00). At only 33 years old, Burton was entering the prime of his career and had every reason to think the best was still ahead for him.

The final years at Roush, however, were hard on Jeff. He didn't win a race in either 2003 or 2004 while he watched teammates Matt Kenseth and Kurt Busch bring home consecutive championships for the team. Even Mark Martin, the resident veteran at Roush, ran up front and led laps. All the while Burton ran a car with only scattered sponsorship as the team seemed to focus its efforts on the success of the other teams. Looking back, it may be unfair to say the team forgot about Burton but at the time it was a conclusion hard to ignore.

So he and the team parted ways midway through the 2004 season and Burton essentially swapped places with Robbie Gordon with Richard Childress Racing. While the move didn't pay immediate dividends (Jeff failed to win a race in 2005 and had his second straight 18th place finish in the final point standings), the results came. The three years between 2006 and 2008 represented a career revival for the driver and salvation for his fans. He piloted the #31 to four wins and 23 top five finishes. More importantly, Burton finished each year in NASCAR's playoffs and averaged a seventh place finish for the seasons overall.

Burton's revival also came with a measure of sponsor angst. Having already gone through sponsorship issues with Roush in years prior, NASCAR's agreement with communications giant Nextel (which would become Sprint) was a direct threat to Burton's ride. The #31 was sponsored by Cingular Wireless- a company that ceased to exist after a reorganization by AT&T. NASCAR allowed the Cingular signage to remain on Burton's car before since the company was involved prior to the Nextel contract. But when the team switched its sponsor signage from Cingular to AT&T, NASCAR stepped in. Lawsuits flew back and forth between the various parties as Burton once again had a car with no primary sponsor. In the end, the sides reached an agreement that enabled AT&T to sponsor Burton's car through the end of 2008. The team would need to find a new partner for the veteran driver at that point.

While the team did indeed find a new sponsor for Burton, the wearing battle with NASCAR left its mark. Since taking the AT&T logo off his car, Burton has failed to win a single race. He's made NASCAR's playoffs only once since that time- a 12th place finish in 2010 that saw Burton running at the very end of the Chase field. What's been even more difficult for Burton fans to watch the team become a non-factor race after race.

Burton is one of the easiest drivers in all of NASCAR to cheer for. His comments on the sport are thoughtful and educated, yet he appeals to the “good ole' boy” element just as easily. While he's had his share of run-ins with fellow drivers over the years, Jeff has shied away from controversy. He races others as they race him. Like former Roush teammate Mark Martin, Burton also carries enormous respect in the garage as a gentleman racer who respects the sport's unwritten rules and has (in the past) shown that you can be competitive while doing so.

Yet here he is. Despite knowing that he will not be a part of RCR's plans in the future, he spent his off day Thursday making numerous sponsor appearances for the team. From a stop at Caterpillar's corporate headquarters to signing autographs at a Chicago-area Menard's (a company that sponsors his teammate, Paul Menard), Burton continues to be the good soldier for the team. No one would fault him if he were to eliminate these kinds of events. He's married with a pair of children that he's seen all too little of chasing the NASCAR dream 40 weekends a year. He's earned the right to step back and enjoy his life- particularly with a bleak future ahead in racing.

That just wouldn't be Jeff Burton's way. Racing is what he's done for over 20 years and it's what he knows best. Next year, he'll either be running a part time schedule a la Martin or driving for an underfunded team struggling to make races. That's the reality for a driver of his age and experience. Burton's doing what we should all be doing. He's enjoying the sunset of a career that's seen him ride the NASCAR roller-coaster for two decades. He has to know that these last ten races are likely the last time he'll climb into a car that's fast enough to win at any track. He may not have taken a checkered flag lately but he's still got the chance to do it.

For his fans, his team, and most of all for Burton himself, I hope he does. In a NASCAR world consumed by talk of cheating Chasers and flat tires that weren't, Burton's last ride is something to cherish. 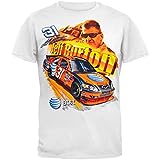 Will Jeff Burton be in a competitive ride next season?