Kurt And Smoke, Together?

I guess that's why they call it the silly season.

Kurt Busch has long been identified as the key free agent domino of the 2014 silly season. He's a former series champion and a supremely talented wheelman who's spent the last two years getting above average performances with less than elite equipment. His inability to control himself off the track is why he's running that equipment in the first place but with every top five performance this year he's adding to his leverage. Now word comes that Stewart-Haas Racing, already with three drivers set for 2014, offered Busch a contract to drive a fourth car for them next year.

The collective, “What?!” you hear comes from a NASCAR fanbase trying to get its mind around the concept of Smoke, Harvick and Busch all in the same headquarters. The driver's meeting would certainly be a lively one. The three all bring strong personalities to the table and have had their share of run-ins on the track as well (not to mention Harvick's long-running feud with Busch's younger brother Kyle). Add in Mark Martin as a driver/mentor and this team becomes a reality show that desperately needs to be made. 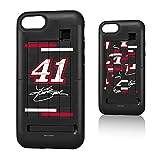 Busch Has Worked With Addington Before

Could this once-laughable picture become a reality? Putting ink on paper for a contract offer means that it's at least possible. While Stewart is a hothead at times, he's also a racer at his core. He wants to win races- preferably as the driver, but as an owner if necessary. The recent Sprint Car crash that sidelined Stewart also has to have opened his eyes to his own driver mortality. There will soon come a day when he's no longer able to compete at NASCAR's highest level. If he wants his team to survive and grow it needs to have drivers capable of carrying on its banner long after he leaves the cockpit. Busch, for all the headaches he provides, is very much capable of that.

The other item that makes this move become plausible is the accompanying sponsor. Reports are that Haas-CNC automation would be the primary sponsor for the car. If additional sponsors can be found to help carry the load, fine. If not, Haas essentially gets a major tax write-off for the on-track exposure. Busch is never far from the camera's eye and Haas would get his money's worth there. Part of what made Furniture Row so attractive to Busch was the fact that owner was also the sponsor. He had fairly limited sponsor obligations and a clear message from management thanks to the unified structure. By moving to SHR with Haas as a sponsor he would have the same benefit while running upgraded equipment.

With three drivers already set for 2014, bringing in Kurt Busch would mean expanding Stewart-Haas Racing to a four car operation. When announcing Ryan Newman's departure at the end of the season, Stewart shut down any thoughts of adding a fourth team to keep him. “We are not ready to expand to a fourth team,” Stewart said during a July press conference. “Unfortunately, this will be the last year that we have Ryan with us.” What changed over the course of the past month to change Stewart's opinion so drastically? The Iowa crash comes to mind rather quickly (that and that accompanying painkillers Stewart is undoubtedly on post-surgery).

Haas Has Sponsored His Own Car Before

Yet if the crash was what changed Stewart's mind about adding a fourth team why not bring Newman back to drive for that team? He's been a solid citizen in his time with SHR. While he's been no threat to win a championship he's won races and been in contention to make the Chase each year. The team also spent over a year developing a relationship with sponsor Quicken Loans and now is likely going to watch that investment go down the drain as the sponsor departs to follow Newman to a new team. All that work will now go towards another team's bottom line- and it's happening so that SHR can expand to four teams to field an essentially unsponsored car for a notoriously unstable driver.

One cannot help but wonder if there is more to the story of Newman's release. Since joining SHR, Newman and Stewart have talked publicly about their friendship. The bond of fellow Hoosiers competing at NASCAR's highest level made for great copy and it's one recently reinforced by Stewart's public comments after Newman's Indy win. Is it possible that the decision to split with Newman is driven by something else? Was there a falling out behind the scenes that led to Newman's demise, no matter what played out on the track? Former crew chief Darian Grubb might have some insight on that process.

Striking Back At RCR?

NASCAR's silly season is often an example of wheels within wheels and the offer to Busch is no exception. Remember that Busch currently drives for Furniture Row Racing, essentially a satellite team for Richard Childress Racing. This past Sunday, Childress' nephew Austin Dillon drove the #14 in Stewart's absence. Dillon himself said the deal was for at least two races and SHR competition director Greg Zipadelli confirmed that. Now it seems that Mark Martin is being brought aboard after one race for Dillon, a race that he did fairly well in. No explanation has been offered yet to explain the sudden and drastic change of course. Is it possible that pressure from RCR led to Dillon being “unavailable”? Or did SHR remove Dillon out of concerns what information he might bring back to RCR for next season's Cup run? And in either case, is the offer to Busch an attempt to strike back at RCR? We may never know.

One thing we do know is that adding a personality like Kurt Busch is no small task. In order for Busch to thrive at SHR, a support system would need to be created to both control Busch off the track and enable him to succeed on it. That support system would by necessity stand next to the support system built for another SHR driver, Danica Patrick. While one of NASCAR's most popular drivers, Patrick is still learning behind the wheel of a stock car. The combination requires great touch by the organization. They must balance the media attention (which helps sponsorship and prestige for all of SHR) with the need to accelerate her on-track development.

Frankly, the relationship between Patrick and Busch is the lesser concern. The relationship between Harvick and Busch is the one that could explode on them all. Teams don't need to be best friends to succeed in NASCAR; in fact, competition can often help them push each other to greater success. But that competition has to end once the race does. Teams that take bad blood back to the shop have little chance to win a championship in today's NASCAR. With limits on testing and practice time, sharing information among teammates enables teams to maximize their track knowledge and speed. What Dale Earnhardt Jr. learns in the #88 becomes immediately available to Jimmie Johnson and vice-versa. All four Hendrick teams can try different lines, setups and engine packages because all four share what they learn afterward.

Picture what could happen at Stewart-Haas. Busch and Harvick, two NASCAR's more aggressive drivers, collide while going for a win. The wreck costs one of those teams a shot at making the Chase. Can you see either of those two drivers willingly helping the other go for a championship under those circumstances? Or is it more likely that they would engage in some form of on-track retaliation, costing the team both in points and in dollars from wrecked racecars? The latter seems far more likely. And the lack of sponsorship on Busch's ride means every dollar spent is one the team has zero chance to recoup.

Perhaps the rumors are just that; rumors that will never become reality. These rumors certainly make for an interesting discussion piece at the very least. Until Busch signs a contract with someone, those rumors will continue to swirl as NASCAR's silly season kicks into high gear. SHR's willingness to expand to four teams (and its willingness to engage Busch in contract discussions) only add more smoke to a picture that's already cloudy at best.