The week after Richmond normally provides a chance for NASCAR Nation to catch its breath and prepare for the playoff Chase. With the sanctioning body issuing unprecedented penalties in the wake of Saturday night's race, that hasn't been the case this year. Earlier this week, I published a pair of articles commenting both on what took place and NASCAR's response to it. In short, I believe that what happened was something that could easily have been predicted- and that it's time to look at the 12 drivers who will compete for a championship and not focus so much attention on the last seven laps at Richmond. The fan base, however, is not quite so ready to accept what happened or move on. Here's what you fans had to say.

“Nascar should HAMMER all three MWR teams and make everyone in the garage think really hard about the consequences if they are caught trying to manipulate the race. Instead of having two chances to win the championship with Bowyer and Truex, they should have ZERO chance to win.” -Christian

“You have to act on this one Mike Helton, to save Some of the character of NASCAR. This was far too blatant and the evidence is there. Just put the repercussions on Mikey, not the drivers, they weren't given much choice.” -Nekkid

This was a fairly common theme running through many of the comments. The poll accompanying the column asked if MWR should be punished for what happened and 67% said yes; another 15% believed that punishment was necessary should NASCAR have sufficient proof that MWR tried to alter the standings with its actions. And in the end, Mike Helton agreed with Nekkid- no one driver was singled out for punishment on the team. All three drivers received the same points penalty and all three lose the support of Ty Norris at the track. Yes, Martin Truex Jr. lost his Chase spot as a result of the penalty but he wasn't singled out. Had he posted the same results before Richmond that Bowyer did he too would still be Chase eligible.

Get your Ryan Newman gear from Amazon 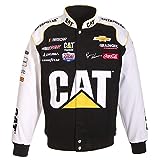 A few readers did take up the discussion of the kinds of teamwork NASCAR fans have found acceptable over the years.

“Trying to equate two teams arbitrarily determining who would come in first and second to purposely crapping out and taking the checkered flag right out of someone's hands who by all accounts would have won that race as well as made the Chase if it stayed green is childish. That's not being a teammate, that's being a prick.” -Nderdog

Ultimately we'll never know whether or not Newman would have won the race had Bowyer not spun out. The field was fairly spread out and there didn't seem to be any signs of debris or deflating tires elsewhere that would have otherwise drawn a yellow flag. But the race isn't over until the leader reaches the checkered flag. Too many things can go wrong in a single lap to just assume the #39 would have won the race.

Readers also didn't miss the fact that after NASCAR's punishment came down, Jeff Gordon was still on the outside looking in. Some felt that it was karma earned after Gordon's actions last year at Phoenix.

“Last year at Phoenix, Gordon intentionally crashed Bowyer and caused him to lose massive points in the 2nd to last race of the season. Bowyer was second in the standings to who at that time... Jimmie Johnson. So Gordon helped his teammate maintain the Championship lead with one race to go.” -Lambert58

“Hi, I loved your article about the overreaction to the Richmond race, I so agree with you, thank you for writing it! It's so funny how everyone says that Jeff Gordon was robbed, yet no one said anything when last year he took out Bowyer which helped give Jimmie a better chance to win the championship.” -Ed

Fans also took the sanctioning body to task, feeling that NASCAR bears some of the blame for what happened. Much like a state that bans gambling while sponsoring a state lottery, NASCAR isn't above doing things that could be viewed as trying to manipulate the results on the racetrack.

“Please don't forget that NASCAR manipulates races as well with the Green White Checkered format. That idea is a joke. Another coincidence, Gordon would not of been in the position he was in if his teammate, who couldn't beat a snail without a turbo all night long, hadn't of drove straight into the wall, maybe with an intentional low tire from a previous pit stop.” -Mike S

“NASCAR has allowed extra points by letting teammates lead a lap, once that was allowed where do you stop helping a teammate?” -Mackyjay

Mike and Mackjay both bring up excellent points here. The GWC finish and double file restarts were both efforts by NASCAR to group up the field and introduce more excitement on the track. While many fans approve of those moves, they both change the complexion of a race. In particular, the double-file restarts can be damaging to teams caught in the wrong line when the green flag drops. Teams have an active incentive to check up leaving pit road to try and get themselves in the 'right' line. So why is it okay for NASCAR to do so but 'immoral' for a team to do likewise?

There was also some questioning as to whether Jimmie Johnson, who has dominated the points standings for much of the season, has been giving it his best effort to win over the past few weeks. There was also some sentiment that Hendrick as a team essentially got what was coming to them.

“The only problem with Saturday's race was NASCAR's big money making team got out smarted... MWR did not do anything this year that the other team has been doing for years and getting away with it because of the money that team brings into NASCAR.” -Yaejsaxe

“Also, ole 5 time has had a run of bad luck for what 4-5 weeks and finish behind Jeffy every race. Very quietly doing the same thing. Not a word mentioned anywhere. Not surprising though, they are more experienced at it,” -Jim

And finally, what would a mailbag be without a few of the more... entertaining comments. There were several worthy contenders for that slot this week.

“Ku Busch earned his way in but Gordon didn’t? and they were separated by 1 point (3 of which were “stolen” in Richmond?) You’re a jerk!” -Eric Carville, Austin TX

“I am glad to know that you are just another citizen that has decided that life is all about achievement, and honesty and integrity don't really matter when it comes to money. It sucks to be you Mike” -Starliner61

“I feel sorry for your kids. Go watch wwe you moron.” -Clark Mayotte

Ron, could you answer the good folks here?