Maybe NASCAR is listening after all

One of the bigger stories to come out of the race weekend in Las Vegas was the driver dissatisfaction with the need to cool their engines around the apron of the track during qualifying. Several noted how dangerous the process was, with Brian Vickers noting it was the, “most dangerous thing I've ever done,” in a race car. Earlier this week, news leaked out that NASCAR planned on tweaking the rules around qualifying to allow teams to use cooling equipment that would eliminate the need to drive 50 miles per hour near cars going 200. The change is one more sign that despite having a reputation for stubbornness, someone in NASCAR seems to be listening after all.

NASCAR's new qualifying format was designed to drum up fan interest while at the same time rewarding teams who found true “racing” speed. It's one thing to batten down the hatches, tape the grill, and go all out for a single fast lap. It's another thing entirely to get out on the track with 42 other cars and try to do the same. Logic dictated that teams would focus more on race setups and the fast qualifiers would be the same teams going fast on race day. This had the added benefit of weeding out the teams that could turn one good lap but were a roving road block at the head of the field trying to do it all race long.

But what the sanctioning body- and most pundits- missed is that the goal still remained a single fast lap. The process to getting there might have changed but the end result was the same. It didn't take a brain surgeon to recognize that more cars on the track equaled more dirty air, more potential for an accident, and more interference on the fastest line around the track. It also didn't take long for crew chiefs to recognize a fact that had been staring them in the face all along; a hot engine produces less speed. And if you cannot cool that engine with the purpose-built equipment in the pits, you'd better find another way to do it. Racing's version of a freeway construction zone was born

See some of the most memorable Winston Cup races ever 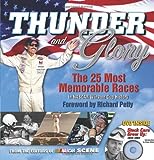 Instead of clinging to their mantra of, “Let it play out,” NASCAR reversed course. By mid-week, the teams were advised that they would be able to cool the engines on pit road after all. Instead of waiting for a tragic accident to prove just how dangerous the situation was, NASCAR listened to voices both in and outside of the garage and did something that made sense. Allowing cooling equipment during qualifying is important in and of itself. But what's even more important is what it says about NASCAR as a whole.

For years, NASCAR's leadership earned a well-deserved reputation for 'my way or the highway' behavior. Bill France Sr., grandfather of current NASCAR head Brian France, ruled the series with an iron will. When drivers unionized and threatened a boycott of his showcase first race at Talladega, France didn't blink. He filled the field from the parking lot and ran his race anyway. Bill France Jr, who followed as NASCAR's CEO for nearly 30 years, maintained the family reputation for dictatorial rule. His son Brian, who assumed NASCAR's throne a decade ago, continues to take an enormous amount of criticism for making changes (such as the Chase for the Sprint Cup points format) that fly in the face of tradition and fan opinion.

But over the past few months, cracks have begun to appear in the armor that is NASCAR's ruling body. The first (and most blatant) crack was NASCAR's reaction to the events at Richmond last fall. Never before had the series changed the outcome of the race once the race itself was over. Teams and drivers found guilty of some rules infraction might be subject to a fine, points penalty, or suspension but the results of the race stood. And while technically the race results didn't change, in the days following Richmond, NASCAR listened to the deafening roar and assessed penalties that nullified the post-race standings. Fans may argue with how the process played out, but NASCAR showed that they heard what was going on and tried to address the problem.

One change that's been far more popular among fans has been NASCAR's work at the restrictor plate tracks. Fans grew to love the pack racing that dominated the bi-annual visits to Daytona and Talladega, not to mention the inevitable “big one” that occurred at least once per race. Drivers may have hated climbing into the middle of the mess and team owners hated writing the checks for wrecked cars but the TV ratings and ticket sales didn't lie; this style of racing was popular for those watching. When the tandem draft began eroding fan support for the tracks, NASCAR spent time and money to make the two car tandem go away. In addition to prohibiting the practice at the Nationwide level, NASCAR also created a rules package that made driving that way over the long haul impossible. The sanctioning body listened and addressed what many felt was a major problem.

Another major change came this past off-season when NASCAR announced a standardized format for assessing penalties. No more would the catch-all phrase of, “Actions detrimental to stock car racing,” be enough to penalize a team for something NASCAR didn't like. Specific actions would have specific penalties and those penalties would be the same across the board. Get caught using a hollowed out part? That's a 10 point penalty and $10,000 fine. Design a part to fail during the race and provide an advantage? That's 15 points and a $20,000 fine. Again, while fans may debate what should or should not constitute a penalty, the lack of transparency in the punishment process has been a major pain point inside the garage. NASCAR heard the complaint and addressed it.

Perhaps the biggest change was the willingness to go for broke and make a radical change in the points format. The Chase for the Sprint Cup was designed to be NASCAR's version of a post-season playoff system. It's been Brian France's baby since day one and he's defended the concept like a mother bear amongst her cubs. Despite heavy criticism from fans, the Chase has remained virtually unchanged since implemented in 2004.

Sure, they've added a couple more teams and tweaked the format with adding wild card drivers, but the core concept remained the same. To win a championship, teams needed to hang around the top ten all season and then peak over the final ten races of the season. Jimmie Johnson and the #48 team in particular understood the format and maximized their effectiveness to win six of the ten Sprint Cup trophies handed down over the ten year history of the Chase.

Despite the criticism, NASCAR could have easily stood pat on the Chase. The format has resulted in at least a moderate amount of drama over the end of each season and was particularly useful in 2011. A season-long points build would have made the finale at Homestead a coronation for Carl Edwards, who dominated much of the season. But with the Chase reset, Tony Stewart was close enough; the points race ended in a tie, with Smoke winning the title on the tiebreaker of total wins. The Chase might be unpopular in many corners but it was popular enough to convince NBC Sports to pony up a record-breaking sum in the billions for the rights to broadcast it starting in 2015. NASCAR didn't have to change anything.

So what did they do this past off-season? NASCAR overhauled the points format completely, ditching the concept of a ten race sprint and adopting a series of eliminations during the final races. The finale will be a winner-take-all race at Homestead with four different drivers guaranteed an equal shot to run for the championship.

Personally, I will probably never be a fan of the new points format. I think it weakens the credibility of whomever wins the title this year and cheapens their accomplishment when compared to the championships of Petty, Earnhardt and even Johnson. But I respect NASCAR for recognizing that it was time to try something different. I respect the series for being willing to listen to the voices (both in and out of the spot) who said the Chase as it was simply wasn't good enough. There are plenty of other things in the sport that need to change (or be restored) in the years ahead. For the first time in a long time, I'm beginning to have hope that those changes might actually happen because somewhere out there, NASCAR is listening- and then acting on what they've heard.

Do you feel NASCAR is more responsive to its fans than it was 10 years ago?