Motor Swaps for the 92-95 Honda Civic

Motor swaps for the 92-95 Honda Civic

One of the best ways to add power to your Civic is to swap the motor. Why keep throwing parts at your car if it will never gain any real power. Short of a turbo or nitrous kit, there is no more effective way to increase your Civic's horsepower. In later posts I will discuss how to make more power with whatever motor you have, but today I will talk about what motors can make you more power.
One thing to keep in mind is the laws regarding swaps in your area. Before embarking on any project make sure the motor you choose is legal. Most municipalities require that the motor in your car is the same year or newer than the motor you are replacing. Also, they may require you to carry over all emission components. The easiest way is to purchase an obd1 motor to put in your obd1 car.
If your car doesn't already have vtec the cheapest way gain vtec is with the sohc vtec d16z6 found in 92-95 Del Sol Vtec's, Civic EX's, and Civic Si's. Rated at 127hp it can give your car a healthy boost. These motors can be found very cheap. Add in the fact that no special parts are needed and it is a very cheap swap. The downside is you are very limited in ultimate power that you will make compared to other swaps. Some people choose the jdm d15b. I would stick with the usdm motor for simplicities sake.
Often overlooked is the f-series motor found in the Accord. As with the d16's f-series motors can also be found very cheap. The drawback is a lot more is involved in the swap. Mounts are needed and something will have to be done about the transmission. Accords come with a cable shifter. However, Bisi Ezerohia has already shown that ample power can be made with these motors. Do not confuse these motors with the f20c found in the Honda s2000. These motors are designed for a rwd car and will not fit without extreme modification.
Next, we get into the realm of b-series motors. By far the most popular choice. Anyone of these motors is going to require a mount kit. Otherwise, they are a pretty straightforward swap. Most swapped Hondas on the road today use a b-series.
Cheapest of all b-series swaps is the b18b found in ls/rs Integras. Rated at 140hp they make more power than any d-series motor. This one does not have vtec but it does come with an increased displacement of 1.8 liters and is dohc. It still doesn't have the power of its vtec brothers but it is a very capable motor. Especially if you want to add a turbo and keep the bottom end stock. A similar motor is the b20 found in the CRV. Basically, it is the same motor but a little bigger.
Probably the most common swap is the dohc vtec b16 motor. Rated at 160hp, it is a very potent motor. Bolt-ons produce quality gains and they respond well to turbos. B16's are relatively cheap compared to other b-series motors and plentiful. The only drawback is its relatively small displacement at 1.6 liters.
If bigger is better, the next choice is the b18c1 found in Integra GSR's. With the b18c1 you get dohc vtec but with 1.8 liters of displacement and 180hp. Anything you can do to the b16 you can do with the b18c1, but you will make more power. One perceived drawback is it's shorter stroke. Some people worry that it is not as friendly to higher revs. In most situations this should not be a concern. the other drawback is that it costs significantly more than the b16.
Best of all b-series motors is the b18c5 found in the Integra Type R. With nearly 200hp out the box it is the most potent b-series motor to swap into your Civic. Cost is the biggest prohibition. Also, to keep costs down, many people will just make another b-series motor stronger. This is a good option, but the Type R is the most complete bolt in swap.
B-series motors are not your only option for high powered swaps. Back in the day the big boy of Honda swaps was the h22 found in Honda Preludes. At 2.2 liters it is one of the bigger motors you can swap into your Civic and it is also DOHC VTEC. Out of the box you will make more power and much more torque than you would with a b-series. In the longer run you might find your self limited because the aftermarket is not developed. Also it is not an easy swap. Nothing about it was meant to be in a Civic. Mounts, axels, and custom fabrication is involved. Not for someone scared of a lot of work. If you are up for the challenge though, these can be very rewarding motors.
Newest on the scene are the Honda K-series. Some form of these can be found in most current Honda and Acura equipped with a 4 cylinder. They have the benefit of the latest in vtec technology called I-vtec. These motors have the most potentiall but also come at a high cost. Not only do they cost more but like the H22 were not meant to be in an older Civic. Most everything is custom and and they involve more work. Potential is high, but for now you may choose to stick with a b-series until costs come down and the aftermarket is further developed. For those brave enough, the rewards can be huge.
Here I've listed most commonly swapped motors to put into a 92-95 Honda Civic. In the end, your imagination is the only limiting factor. Everything up to a Chevy 350 has been crammed into a Honda Civic. Most importantly, swap that tired old motor out. The possibilities are limitless for people willing to improve their Civic. 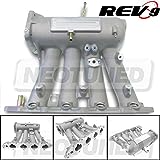