On Friday, NASCAR President Mike Helton confirmed that the sanctioning body will grant a waiver to Tony Stewart that would make him eligible for the Chase with a win in the next two races. The decision is a moment of sanity for a sanctioning body that has faced many difficult decisions over the past year. Stewart's decision to pull himself from the track these past three weekends was the right thing for all involved and penalizing him for doing so would have been wrong.

The early August accident that claimed the life of Kevin Ward Jr. was a tragedy of unimaginable proportions. For his friends and family, it was a horrific moment that claimed the life of a young man far too early. For Stewart himself, he'll have to live the rest of his life knowing that he was involved in the death of a fellow racer. Even those who believe Stewart is responsible for the incident will admit he wasn't trying to kill Ward; no matter which side of the responsibility argument you fall on, anyone can see just how much this has impacted the survivor, Stewart.

Even though it occurred in a Sprint Car race, the accident also put a harsh spotlight on NASCAR itself. Most non-NASCAR media members don't know the difference between Sprint Car and Sprint Cup. It's also the price NASCAR pays for being the premier form of motorsports in America. They've made racing synonymous with NASCAR in the eyes of many people so when something like this happens, they will share in the blame. That share is magnified by the fact that racers like Ward have grown up idolizing drivers like Stewart step on a live track after an accident.

Support Smoke and get your TS gear from Amazon! 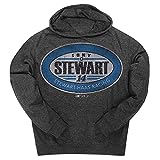 So having Stewart step away from the track was the right thing to do for all involved. Tony needed time to grieve and to put his own psyche back together. NASCAR as a whole needed time to put the incident in their rear-view mirror and create new stories for both fans and non-fans alike to talk about. Stewart also did NASCAR an incredible favor by not making the sanctioning body take action directly; had he shown up to race at Watkins Glen, NASCAR would have been in an incredibly difficult position in whether or not to let him race. Not allowing Stewart to compete for a Chase berth would have been quite literally a matter of piling insult on top of injury.

It's also worth taking a look at what the eligibility rules were designed to do in the first place. The idea was that only full time teams would be able to compete for a spot in NASCAR's playoffs. Without the “every race” rule, a team could roll the dice on a handful of races and spend all of their resources toward those events. Why should a team not competing all year long be able to win what is supposed to be a season-long championship?

The exception to allow a driver to compete despite missing races has been described as “under exceptional circumstances” since day one. At the time, the only special circumstance most of the NASCAR media considered was a driver missing time due to injury or illness. Indeed, Denny Hamlin missed a race earlier this year over medical issues and he received his own Chase exemption thereafter. Having won earlier this year at Talladega, Hamlin will be in the playoffs come Chase-time.

While Stewart himself was unharmed physically in the accident, to say he was uninjured is laughable. The man suffered an incredible psychological trauma. Think about your own life; if you were to hit and kill a pedestrian while driving, it would be a while before you were ready to drive near people again. Even if there was nothing you could do to prevent it, the knowledge that you were behind the wheel when someone died would weigh on anyone's mind. And that's for a car going 35mph in everyday traffic.

So Tony owed it to himself and to everyone else on the track to step away and to get his mind right. My only question is whether Smoke stayed away long enough to do that. But as many close to Stewart have said, his recovery could go no further until he returned to the track. He needed to be back in the garage and on the track because these people are his family. They are his sanity. They are his life. And until he came back, there was only so far he could go to reclaim that life.

Time will tell if Stewart will ever again be the racer that he was just a few years ago. His performance at Sunday night's race in Atlanta is encouraging; he seemed to have an extra gear at the beginning of the race, passing cars left and right. But it's one thing to make a few passes on your first night back. It's another thing entirely to have the same level of drive and determination when running a step slow while playing out the string. It will be far easier in those moments to reflect on the events of the past year and begin to wonder- if only for a moment.

Remember, it was only one year ago that another Sprint Car crash shattered Tony's leg and put him on the shelf for the remainder of the 2013 Sprint Cup season. Unless the #14 can win at Richmond next week, he will once again be on the outside looking in at NASCAR's playoffs. At 43 years of age, he's unquestionably closer to the end of his driving career than his is the beginning. He's also a racing businessman, with ownership interests in diverse tracks and teams. Racing may be his life but he may be discovering that there are ways to quench the racing thirst without driving a Sprint Cup car.

That approaching end is perhaps the biggest reason why letting Stewart compete for the Chase was the correct choice for NASCAR. Stewart has given much to the sport over the last decade and a half. He's gone from open wheel phenom to multi-year champion to elder statesman. He's one of the last of a dying breed of racers who just climb behind the wheel and put the hammer down, no matter what or where. To tell that man that he cannot try to be your champion- under these circumstances- is beyond a mistake. It would have been wrong.

Should NASCAR have granted Stewart an exemption and allowed him to race for the Chase?